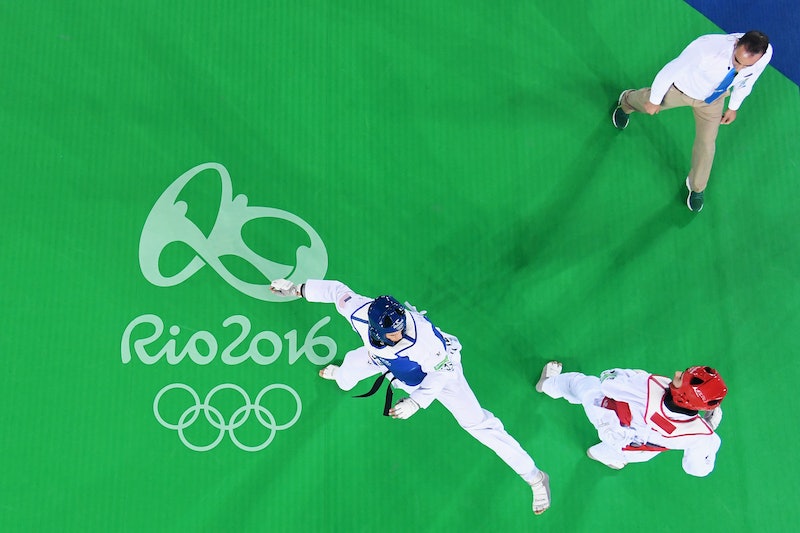 A class-action lawsuit filed Friday claims the U.S. Olympics Committee ignored rape allegations against two taekwondo figures, one a former Olympian, Steven Lopez, and his brother and Team USA coach, Jean Lopez. Nearly 50 athletes, including minors, say they were raped or assaulted by the two brothers while training with them, the New York Times reports, and they are now suing now suing the USOC, USA Taekwondo, and the Lopez brothers themselves for sexual misconduct — including sex trafficking.

The Lopez brothers have previously denied allegations of sexual assault. Bustle has reached out to the USOC for comment on the lawsuit. USA Taekwondo said in a statement that it "would be inappropriate to comment at this time."

Jean was banned permanently from the sport in April after the US Center for SafeSport concluded that he was guilty of sexual misconduct involving a minor. Steven was temporarily suspended on Monday while SafeSport investigates allegations into him, USA TODAY reports.

According to the Times, the allegations against the brothers are extensive. One plaintiff in the lawsuit alleges that she was sexually abused by Jean when she was 15 and then raped by Steven five years later, the Times reports. Another claims that Jean drugged her drink and sexually assaulted her while training in Germany. The lawsuit alleges that the USOC was aware of these allegations as far back as 1996, but turned a blind eye to them; as such, the plaintiffs argue that the USOC "exposed hundreds of young female athletes to two adult predators" by supporting the Lopez brothers and paying for their travel to competitions.

Four women are named in the lawsuit, while 44 additional women have joined the lawsuit anonymously as Jane Does. The Times reports that there are also five anonymous men amongst the plaintiffs.

The Lopez brothers are titans in the world of taekwondo. Steven is a five-time Olympian with three medals under his belt, and is the only five-time World Champion in the history of the sport, while Jean coached the U.S. Olympic Taekwondo team in 2004, 2008 and 2012. In addition, their siblings Mark and Diana have also competed in the Olympics, with Jean coaching. In totality, they are sometimes referred to as the "First Family of Taekwondo."

Although the lawsuit against the Lopez brothers is new, reports of sexual assault allegations against them are not. USA TODAY reported in 2017 that USA Taekwondo began investigating the two in 2015 after they were accused of sexually assaulting multiple women. According to USA TODAY, however, USA Taekwondo held no hearings on the matter, and ultimately placed the investigation on pause so that Steven could compete, and Jean could coach, in the 2016 Olympic Games in Rio. The attorney investigating the matter, Donald Alperstein, later informed the FBI of the allegations, according to USA TODAY.

In a statement, USOC spokesperson Patrick Sandusky said that the organization "is deeply focused on supporting, protecting and empowering the athletes we serve." USA Taekwondo said in a statement that it "has not had time to review the filing in any detail, and as this is an in-process legal matter it would be inappropriate for us to comment at this time."

The Lopezes haven't commented on the lawsuit. However, they've previously denied the allegations. Jean told USA TODAY in June that he's "never been inappropriate with anyone," while Steven, when asked if he's ever sexually assaulted or been sexually inappropriate with women, said he's done "nothing like that."

The lawsuit comes as the USOC is already facing intense scrutiny over its handling of sexual assault allegations, most notably with regard to former gymnastics doctor Larry Nassar. Nassar was convicted of molesting his patients in his capacity as an Olympics doctor, and will spend the rest of his life in prison.