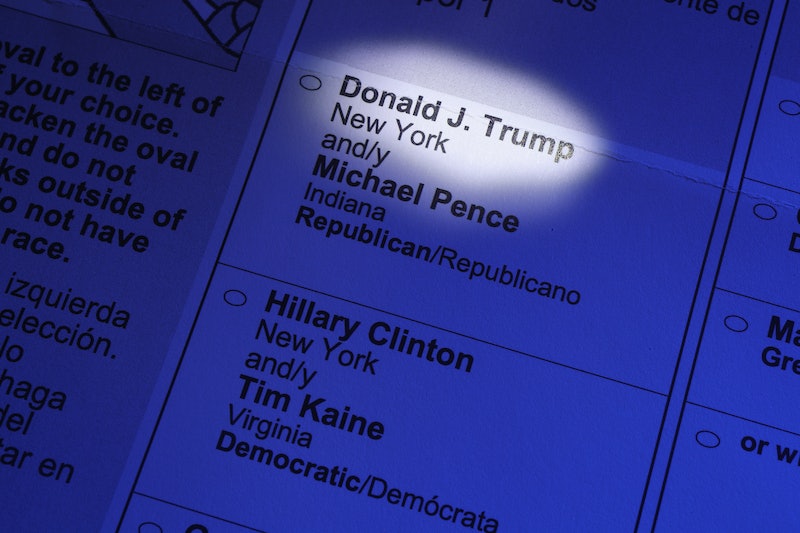 A handful of states are considering bills that, if fully passed into law, could force President Donald Trump into releasing his tax returns or face serious consequences. In fact, 2020 ballots in these states might not include Trump unless he releases his tax returns.

Most recently, Washington's state Senate narrowly passed legislation that would require any presidential or vice presidential candidate who wants to be listed on either a primary or general election ballot to release at least five years' worth of tax returns. If passed by the House and signed into law, the bill could effectively knock Trump off upcoming 2020 ballots in the state unless he opted to make his returns public.

Supporters of the bill have argued that tax returns can provide voters with valuable insight into how candidates handle their own finances, and have thus "become part of the vetting process," CBS News has reported.

Opponents, however, have questioned the idea of forcing transparency by placing conditions on candidates for federal election. What's more, they've expressed concern about the potential legal challenges such legislation might incur.

But Washington legislators aren't the only state lawmakers to consider such a bill. In fact, the Associated Press has reported that, according to the National Conference of State Legislatures, similar bills have been introduced in at least 25 states in recent years.

In February, for example, the New Jersey state Senate passed a bill making the release of tax returns a state requirement for presidential and vice presidential candidates. A similar bill was passed by both the state's Senate and General Assembly in 2017 before ultimately being vetoed by then-Gov. Chris Christie, USA Today affiliate the Bergen Record has reported. New Jersey's Democratic legislatures are reportedly hoping the state's new Democratic governor will sign the new bill into law should it pass the New Jersey General Assembly.

Legislators in Illinois are also mulling legislation that would make any presidential or vice presidential candidate seeking to appear on a general election ballot ineligible unless they have released five years worth of tax returns at least five days prior to the state's ballot certification deadline. The bill has not yet come up for a vote, according to the Chicago Tribune.

But such bills have advanced through state legislatures before, only to fail to make it past all of the required hurdles. In 2017, for example, the Los Angeles Times reported that then-California Gov. Jerry Brown vetoed a similar bill passed by the state's legislative body, arguing that it could spur the establishment of additional dangerous litmus tests for candidates seeking federal office.

But it isn't just state legislators who've proposed making the public disclosure of tax returns mandatory. House Democrats introduced what they call the Presidential Tax Transparency Act in January. The bill would require the Internal Revenue Service (IRS) release the last 10 years worth of tax returns and return information of "certain candidates" running for president or vice president. The bill has yet to be voted on.

It's unclear, however, if such bills would be able to withstand legal challenge. According to the Associated Press, the Supreme Court has ruled that states are unable to add additional requirements or qualifications on to senate and congressional representatives beyond what is outlined in the Constitution. That being said, the Constitution also allows states the authority to establish their own rules for how presidential elections are conducted within their bounds.

According to the Associated Press, Washington state Attorney General Bob Ferguson and solicitor general Noah Purcell have told state lawmakers that although they believed the bill eventually passed by the state's Senate was "likely Constitutional," it would probably still be challenged in court.