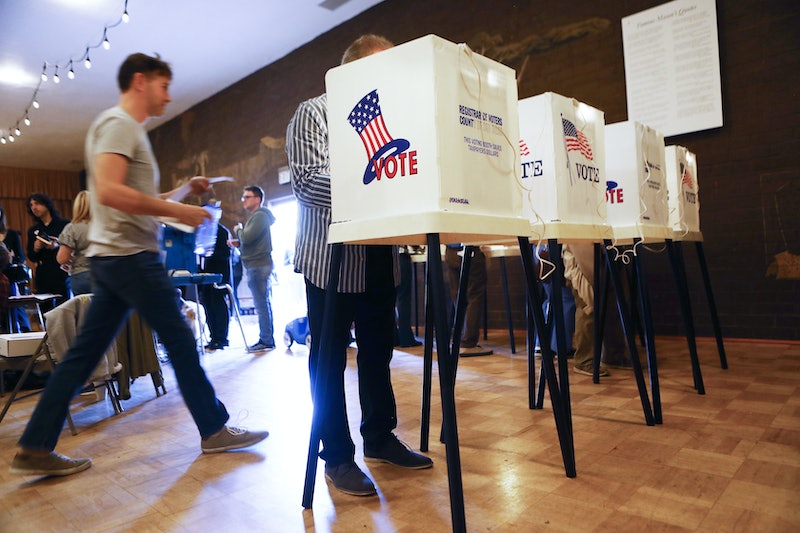 A certain generation in the United States plans to make itself heard at the polls in 2020, according to recently released research. A Barnes and Noble College study, published on Thursday, sheds light on potential 2020 voter turnout among college students in Generation Z. Their participation could be crucial, as the study noted Generation Z is "projected to account for one-in-ten eligible voters." Similarly, Pew Research noted earlier this year that Generation Z will account for 10% of the 2020 electorate.

For starters, it's worth understanding who technically falls into the Generation Z category. According to the Pew Research Center, a Generation Z individual is someone who was born between the time frame of the late 1990s and early 2000s. So far, in various reports, this generation has been described as politically active and involved, opinionated on social issues, and more on the liberal end of the political spectrum.

Although 54% of the participants stated they did not plan to get involved in the 2020 presidential election beyond voting, 24% said they would participate in school discussions about it. Additionally, 23% expressed interest in online debates about the election and 15% said they would attend political rallies.

The study also paints an insightful and telling picture of how this younger generation consumes election news. In one instance, participants voiced their concern about what they perceive to be a lack of impartiality in news and information sources. In fact, according to the study, 75% of the Generation Z participants said that they found it difficult to locate information sources that they believed were unbiased.

According to a Census Bureau survey released in 2017, which is the most recent research on the subject, over 68 million Americans fall into the Generation Z category. Furthermore, registered Generation Z voters seem to take elections pretty seriously. According to The Pew Research Center, Generation Z was right along millennials and Generation X when it came to outvoting older generations during the 2018 midterm elections. If they practice the same zest, they may outvote older generations once again in 2020.

According to Barnes and Noble College, the research could provide critical insight to brands, news media outlets, presidential candidates, and politics parties on just how to engage with Generation Z Americans. After all, "Generation Z is positioned to be a truly defining force in the upcoming election," according to the study. "They want to make their voices heard by casting their ballots on election day."