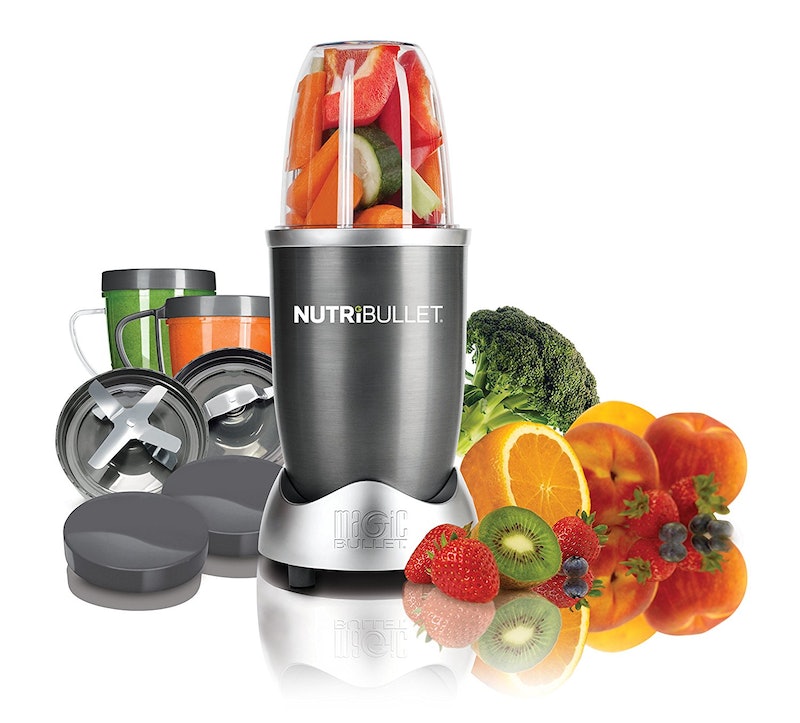 The company behind the famous Magic Bullet blender is now being sued over the appliance's high-powered sibling. At least 22 people claim that their NutriBullets "exploded," allegedly causing severe burns and lacerations, CBS News reported. The maker of the Magic Bullet and NutriBullet (as well as several other well-known super-blenders, like the Baby Bullet), Homeland Housewares, is contesting the lawsuits and plans to "thoroughly" investigate the claims. In a statement reported by CBS News, the company said, "Reports of our blenders causing injury are extremely rare... We typically find customers have failed to adhere to the operating instructions and warnings provided."

Update: In an emailed statement to Bustle, NutriBullet said, "Customer safety and satisfaction are paramount at NutriBullet. Reports of blenders, which have operated normally for years, suddenly turning cool ingredients into scalding hot mixtures after less than 20 seconds of normal operation are perplexing and contrary to the hundreds of millions of uses by satisfied NutriBullet customers worldwide. We will investigate the claims thoroughly and analyze the blenders in question to determine exactly what happened. Whatever the circumstances surrounding these accidents, we wish prompt and complete recoveries to those involved."

Previously: Los Angeles-based attorney Danny Abir, who is representing some of the clients, told CBS News he believes a manufacturing defect could be causing NutriBullets to erupt. "The spinning creates heat and pressure inside the canister and the canister can blow up," Abir said. This, however, has not been confirmed.

The NutriBullet was built to be more powerful than the Magic Bullet, with 600 watts compared to the Magic Bullet's 250 watts. It has "exceptional nutrient extraction power," according to the product website, and "is the ideal tool for health-conscious individuals looking to fuel their exceptionally busy lives."

One of those busy individuals is Army reservist Phyllis Cerrato, whose case may be the first to go to trial. She claims her NutriBullet exploded the first time she used it to make a smoothie back in 2014, giving her second-degree burns from which she is still recovering.

"I feel like it was something that was going to make our family more wholesome and more healthy," she told FOX 13. "But it took a lot away from me, my livelihood of life and enjoying myself."

Another person who filed a lawsuit, Sheryl Utal, told CBS she used her NutriBullet every day for years to make morning smoothies. But then, she claims, it exploded unexpectedly, giving Utal second-degree burns on her arms.

"It just came flying out all over me, all over the kitchen, the ceilings, the walls," she told CBS, adding that her arms felt like they were "on fire." Splatters of the contents also reportedly hit Utal's chest and face. Another woman, Rosa Rivera, spoke to CBS on Nov. 14, and claimed she too suffered burns when her NutriBullet allegedly exploded.

Mark Suzumoto, a NutriBullet corporate attorney, said in a statement to FOX 13, "Customer safety and satisfaction are paramount at NutriBullet. Reports of blenders, which have operated normally for years, suddenly turning cool ingredients into scalding hot mixtures after less than 20 seconds of normal operation...are perplexing and contrary to the hundreds of millions of uses by satisfied NutriBullet customers worldwide." Suzumoto added that the company plans to "investigate the claims thoroughly and analyze the blenders in question to determine exactly what happened."

This is not the first time allegations claiming that NutriBullets are dangerous have surfaced. In March 2017, news broke that a man named Pete Damiano had filed suit against Homeland Housewares after his NutriBullet allegedly exploded, causing facial injuries. His lawyer, Lori Andrus, told Today Tonight Adelaide that Damiano's lawsuit was the second her firm had filed against Homeland Housewares; the first lawsuit concerned the Magic Bullet, not the NutriBullet, but involved an alleged "similar design defect." Like with the current lawsuits, the company responded by alleging that customers who had suffered injuries had improperly used their machines.

FOX 13 reports that, according to Cerrato's attorney, Michael Laurato, Cerrato's case is expected to go to trial in federal court in January 2018.

Editor's note: This article has been edited to include an official statement from NutriBullet.