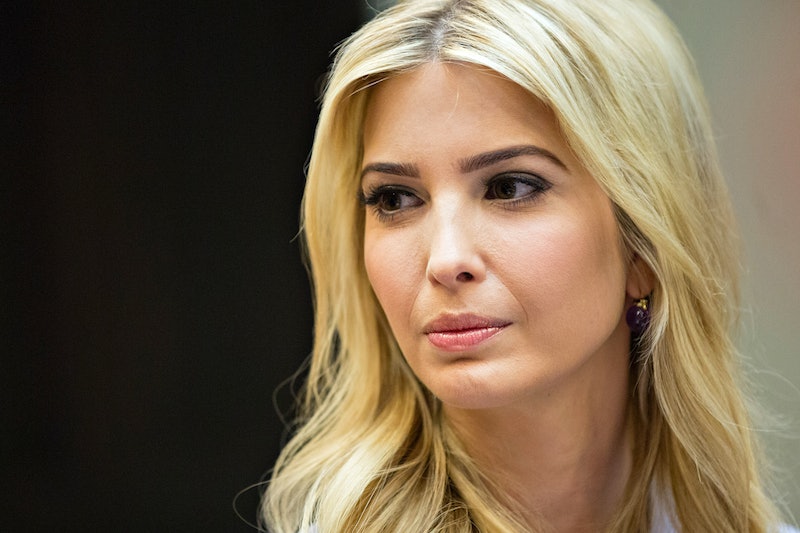 Ivanka Trump has done scores of media interviews over the course of her life in the public eye. But her latest interview with CBS's Gayle King was a bit different, marking her first time being interviewed after getting a job in the White House. Charges of nepotism followed Trump's becoming Assistant to the President, a.k.a. her father Donald Trump. King and Trump covered a lot of ground in the segment that aired on CBS This Morning on April 5. But considering the many biting responses to Trump's CBS interview, many people weren't feeling what the first daughter was laying down.

The part of the interview that seems to have caused the most uproar is when King asked Trump to respond to critics who say she is complicit in the White House's actions. Her puzzling answer included a creative reframing of the definition of "complicit" followed by praise for her father's administration. The two also discussed her current involvement in her company, privately disagreeing with her father, moving to Washington, D.C., and whether her husband Jared Kushner is qualified to serve as a senior adviser to the president.

Critics of the segment are making their feelings known all across social media. But at least one thing Trump said that we can all agree on, she certainly is in a "unique and unprecedented situation."

Defending Trump Is A Slippery Slope

At Least Someone Enjoyed It

There's Not Usually A Good Side To "Complicit"

Short And To The Point

Some Heard The Interview Differently

There's Some Contradiction In All This

Ivanka Has Some Unsound Reasoning

So Many Different Definitions Of Bravery

Pelosi Got In On The Action

The Quote Was Taken Out Of Context

There Are Some Lingering Questions

Trump is no stranger to being widely criticized, so it's likely she expected there would be backlash after the interview aired. But now that she has set up the expectation that she is working behind the scenes for causes she supports, the microscope she is under is bound to get even more focused.

This interview did nothing to quell accusations of nepotism in the White House or the Trump family's complicity in the Trump presidency. If anything, it just sparked more questions. Let's hope this interview won't be her last and her next will be a bit more pointed.