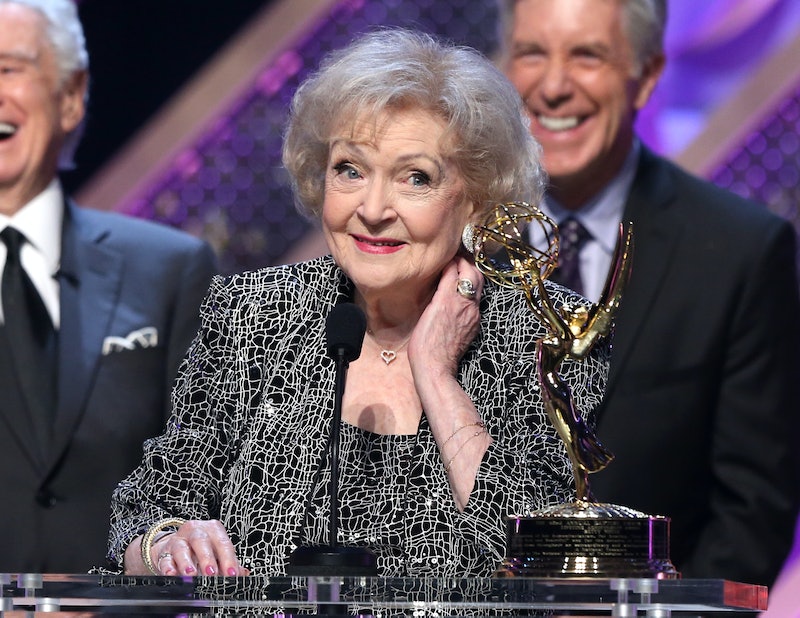 They say that celebrities are just people. That to put them up on a pedestal is to set these flawed, yet shiny, humans up for a great fall. But, you know which celebrity has been going strong for oh, I don't know, 95 years or so, without ever really disappointing us even once? My girl, the incomparable Betty White. On the contrary, actually, instead of letting us down, as most people (famous or not) inevitably do, White has only increased her impressiveness over the years.

While most people would wind down in their careers as they approached their elderly years, the actor actually amped up her work load. And it doesn't really feel like it's because White needs the money. As TIME relays, per Celebrity Net Worth, her net worth is $45 million. No, it seems that it's more about the fact that she still has so much more to contribute to entertainment, to comedy, and honestly, the world as a whole. White proves that wit, chutzpah, and liveliness doesn't have an age. In fact, if anything, the universally beloved star proves that she does what all aspiring legends hope to — she transcends time.

Here are 23 GIFs that prove that Betty White is a true gift to humanity, one I am extremely thankful for.

1. When She Gave Us The Secret To Her Longevity

*Jots down in notebook*

2. When She Embodied The Woman, The Myth, The Legend: Rose Nylund

3. When She Stole All Of Hollywood's Hottest Men

Show us how it's done, Betty.

She's smooth AF, I'll give her that.

6. It's Honestly Out Of Control

7. When She Taught Us How To Dab

8. When She Won A Wrestling Match Without Even Competing

When Betty's involved, it ain't a competition. You feel me?

9. When She Knew How To Liven Up An Interview

10. When She Proved The Term "Little Old Lady" Was Everyone Else's Hangup

Hell to the yeah.

11. When She Out Sassed Andy Cohen

Not an easy feat.

Girl, tell 'em. It's all about how you carry yourself.

13. When She Finally Admitted What We Knew All Along...

That she's a superhero.

14. When, For A Brief Moment In Time, The World Was Blessed With Two Of Her

If only there were more Betty Whites to spread around this undeserving wasteland. Maybe then it'd be a better place.

15. When She Proved Their Was No Pop Culture Moment She Couldn't Make Better

17. When She Was Literally Just Full Of Joy

*Dances behind my computer screen with her in spirit*

See above: A person I wouldn't step to.

19. When She Had A Dance Off With Jon Hamm

Hamm tried. He did.

20. When She Became Besties With Bo Obama

21. Also, When This Happened

Betty and dogs: a dynamic duo.

22. When She Proved Badassery Only Improves With Age

23. When She Hinted At Her Immortality

God, how I hope this is true. We need you, Betty. So much so that people have started petitions to keep you safe.

Betty White may be 95, but she's still schooling us all. And I don't know about you, but I wouldn't have it any other way. We should all aspire to be a little more like her.