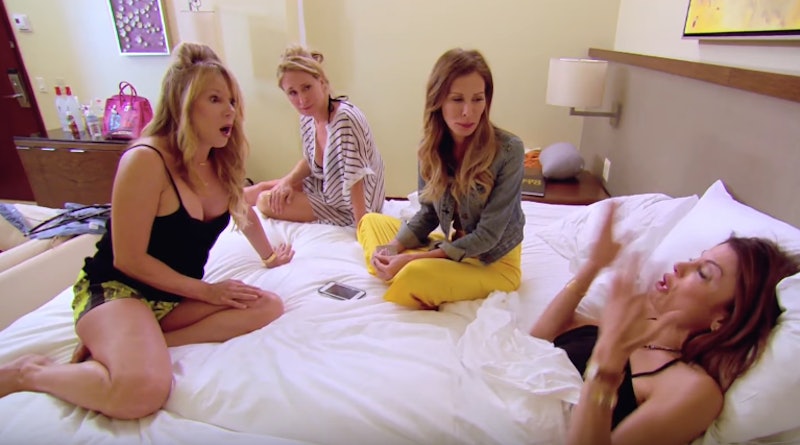 There are two kinds of people in this world: people who love Bravo and people who haven't given it a fair chance. There is something for everyone to enjoy on the network, but the people who watch (and obsesses over) every single show are in a league of their own. There are actually a lot of signs that you're completely obsessed with Bravo and a lot more extreme than a casual viewer.

At this point it's not a huge deal to follow cast members on social media. It's just a pretty standard thing for most reality TV viewers, but there are some habits that are unique to the Bravo-obsessed. It takes a lot of commitment to be such a dedicated Bravo viewer, but it is definitely worth the effort. Sure, there are some "friends" that may question your devotion, but true fans don't let the teasing get them down.

Not everyone is cut out for the Bravo superfan lifestyle, but thankfully, fans who are aren't alone. There are plenty of people who have their DVRs filled with Bravo shows, talk about the cast members as if they're friends with them, and support the stars by buying the products they're selling.

If reading this list hits a little too close to home, then it's time to accept that you're fully obsessed with Bravo.

1. You've Had Dinner At SUR, Villa Blanca, And/Or Pump

Everyone has to eat. Why not satiate your cravings for food and Bravo at the same time by dining at one of Lisa Vanderpump's many restaurants? Plus, there's a good chance of running into cast members from Vanderpump Rules or The Real Housewives of Beverly Hills. The most dedicated viewers have traveled from great distances to be patrons at these establishments.

2. You Sip Skinnygirl Drinks On A Regular Basis

Drinking Skinnygirl margaritas, sangria, or vodka won't turn you into Bethenny Frankel, but there's no better way to channel the New York Housewife in a social setting.

3. You've Looked Into Chartering A Boat With The Below Deck Crew

As fun as it would be to hang out with the Below Deck or Below Deck Mediterranean cast during a charter, it is definitely something for the higher budget fans. Nevertheless, anyone who has done a search (or two) to see how to make it happen is definitely dedicated.

4. You Participate In WWHL Polls & Call In With Questions

There's nothing better to watch at night than Watch What Happens Live, but the viewers who vote in the polls or call in with questions are instrumental in making it the entertaining show that it is.

5. You Are A Member Of Bravo Fan Facebook Groups

Did you even watch an episode if you didn't post about it on social media and discuss it with others? Sure, but it's definitely not getting the full experience. Being a part of Bravo fan Facebook groups and discussing the shows on Twitter are standard practices for the most enthusiastic Bravo fans.

6. You Worked Out At CUT Fitness

If a Real Housewives of Orange County viewer lives in the area and doesn't work out at CUT Fitness, then they are really missing out on the chance to capitalize on their fandom.

7. You Are Well-Versed On Jax's Dating History

Anyone who is a new Vanderpump Rules viewer, just knows that Jax Taylor has been in a long-term (and very dramatic) relationship with Brittany Cartwright. The people who have been watching since the beginning have been able to keep track of his dating history and comprehend just how weird it is that this cast of exes still hangs out. Anyone who is able to keep all of that information straight is definitely considered a Pump Rules expert.

Sonja Morgan has been talking about launching a toaster oven ever since she joined The Real Housewives of New York City. It's taking many years for this project to materialize, but anyone who's holding out hope to purchase a Sonja Morgan toaster oven is a truly loyal individual.

9. You Read All Of The Books Written By Bravolebrities

No matter who actually writes the words, fanatics have no issue purchasing books written by the Bravolebrities. Not only that, but the biggest enthusiasts have waited in long lines to get their books signed and get a photo with the author for an Instagram post.

Whether it's asking friends some tough questions verbally or downloading the official Plead the Fifth app, faithful Watch What Happens Live viewers have played this iconic game many times over.

11. You Listen To Bravo Stars' Music Without Shame

Not all Bravolebrities are gifted singers, but a lot of them do it anyway. People who know the lyrics to songs by Luann de Lesseps, Kim Zolciak, Scheana Marie, Melissa Gorga, or any other star on the network are true Bravo fans.

12. You're Scared To Copy A Housewife's Hairstyle

It makes sense that people would want to copy a Housewife's hairstyle, but long-time viewers know that can be more of an offensive gesture than a compliment. Even if it's (extremely) unlikely to run into the person who originated the hairstyle, some fans know it's just better to respect their wishes and not copy a look.

13. You're Hesitant To Call Anyone "Honey"

"Honey" was a sweet term of endearment, but ever since Teresa Giudice called Danielle Staub by the nickname, its connotation is up for interpretation. Real Housewives of New Jersey historians exercise caution when it comes to using the pet name.

14. You Know What Your Tag Line Would Be

A Housewife's tag line conveys so much. Almost everyone who loves Real Housewives has drafted a hypothetical tagline for the show's opening credits. May you've even come up with more than one just in case you ever get a call from a casting director.

Not everyone gets the privilege of turning up with Vicki Gunvalson, but there's no better way to feel like a Housewife at party than using the phrase "whoop it up" whenever applicable.

16. You Looked For Tom At The Regency

Sure, the Regency is a nice establishment, but it has a whole new allure thanks to the infamous Tom D'Agostino. Anyone who went to the Regency hoping (and searching) for a Tom sighting is on another level of fan.

This moment is the undisputed most iconic moment in reality TV history. Bravo superfans are steadfast when it comes to this, and in all honesty it's more of a "fact" than an "opinion."

After feeling like a tortured third wheel watching Vanderpump Rules for years, Bravo fans got emotional when Tom Schwartz and Katie Maloney got it together in time for their wedding day. Anyone who is invested in this show got choked up during the wedding... and re-watched it... many times.

19. You Still Have Hope For RHOM

The writing has been on the wall for Real Housewives of Miami for years. New cities have joined the franchise and Bravo doesn't even air the old RHOM episodes, but true Bravo addicts have hope that the series will return one day.

20. You Made Eggs à la Française

If a countess can cook up this dish, then so can any "normal" person. Anyone who was inspired by Luann de Lesseps to whip up some eggs à la Française to squash an argument has pulled a #TotalHousewifeMove.

21. You're Still Not Over Aviva Throwing Her Leg

As polarizing as Aviva Drescher was on RHONY, that leg toss was both surprising and legendary.

The best way to have an Erika Jayne-inspired alter ego is to try out her signature dance moves. Bonus points for the fanatics who wear a fully body catsuit while doing so. That is some serious devotion.

23. You Think Milania Is The Real Star Of RHONJ

Yes, the show has the words "Real Housewives" in the title, but it's Milania Giudice's world and everyone else is living in it.

There is nothing wrong with a family van, but the people who lived for it when Vicki screamed into the phone when a family van arrived will always find humor at the sight of the vehicle.

Thankfully, no one is alone when it comes to being totally obsessed with Bravo. There are many people who can relate to these signs and are more than proud to do so.