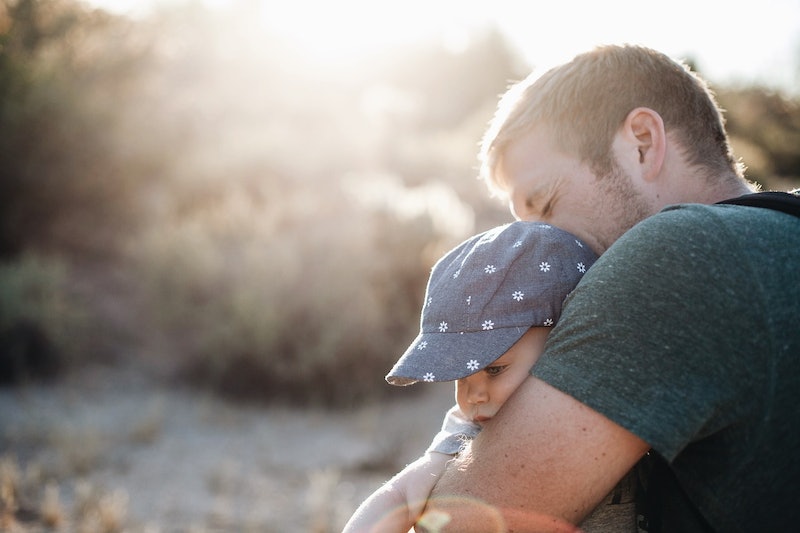 Father's Day 2017 is fast approaching, and if you've got a dad worthy of admiration there are many ways to show your love. But, what do dads think about being fathers? These dad quotes to share on Father's Day 2017 can give you an insight into what your dad may be thinking about his epic adventures in fatherhood. All dads are, of course, different: some dads raise children alone, or share equal parenting responsibilities with mothers. And, they've got a unique take on what it takes to be a parent.

Lauren Graham was raised by her dad after her parents divorced, an experience that undoubtedly molded her into the person she became. "He is extremely smart and mellow and positive, just an easy person to be with," Graham said in an interview with Redbook. "And we had all these adventures: We lived on a houseboat in the Virgin Islands for half a year, and I went to Europe more than any kid I knew. One thing I got from both my parents was a sense that it was important to follow something [you're passionate about] that might not seem practical."

One thing many parents try to do is give their children both roots (a stable home to return to), and wings (confidence and wisdom to pursue their dreams). These dad quotes will take you inside the trials and triumphs of fatherhood. Because, dads!

1. Having children is like living in a frat house — nobody sleeps, everything's broken, and there's a lot of throwing up. — Ray Romano

2. "Being a father has been, without a doubt, my greatest source of achievement, pride and inspiration. Fatherhood has taught me about unconditional love, reinforced the importance of giving back and taught me how to be a better person." — Naveen Jain

3. "Fatherhood is the best thing that could happen to me, and I'm just glad I can share my voice." — Dwayne Wade

4. "Being a father helps me be more responsible... you see more things than you've ever seen." — Kid Rock

5. "I had no expectations about fatherhood, really, but it's definitely a journey I'm glad to be taking. Number one, it's a great learning experience. When my mother told me it's a 24/7 job, she wasn't kidding." — Christopher Meloni

7. "It changes everything. You literally just wake up… Look in the mirror and go, 'I have no idea what I’m doing.'" — Justin Timberlake

8. "Fatherhood is the best thing I ever did. It changes your perspective. You can write a book, you can make a movie, you can paint a painting, but having kids is really the most extraordinary thing I have taken on… [fatherhood] is everything…. the hardest job in the world, the most rewarding job in the world…" — Brad Pitt

9. "I’ve never protected the president [in real life], but I have been a new dad, and I can tell you that being a new dad is pretty terrifying. I’m pretty sure that something about the president makes the stakes a little higher, but to me as a new father, nothing is more important or scary than protecting a daughter." — Channing Tatum

10. "[Fatherhood is] the greatest thing that could ever happen. You can’t explain it until it happens, it’s like telling somebody what water feels like before they’ve ever swam in it." — Michael Bublé

11. "Every day I’m proud to be a dad. When you have kids, there’s no such thing as quality time. There’s just time. There’s no, ‘Ooh, his graduation’s better than going to the mall.’ It’s all kind of equal. Changing her diaper and her winning a contest, it’s all good." — Chris Rock

12. "If my kids had to describe me they would say I am fun, hopefully? Also obsessed with their table manners. Such as closing their mouths when they chew." — Christopher Shulgan

13. "The thing that makes me worry most as a dad is impending environmental collapse and also the world’s hatred of women. I don’t want my daughter to spend her adulthood searching for clean water and fending off a bunch of idiots." — Adam Mansbach

14. "My happiest moments as a dad are those peaceful ones amid the chaos, snuggling on the couch to read a book or napping with our infant son nestled in my arms. The older they grow, the less of these moments I’ll find, so I try to take as many of them in as I can." — Casey Palmer

15. “You just have this little human that’s a product of your and your partner’s love. And I think that’s really incredible to see ourselves reflected in our little child that we get to raise, teach and nurture, and I’m excited to do that.” — John Legend

16. "In my career there are many things I’ve won and many things I’ve achieved. But my greatest achievement is my family. What matters is being a good father and a good husband – just being connected to family as much as possible. Being a dad is more important than football, more important than anything. I adore children. I love the fact our children are part of both of us. It’s one of the most amazing things ever.” — David Beckham

17. "There should be a children's song 'If you're happy and you know it, keep it to yourself and let your Dad sleep.'"— Jim Gaffigan

18. “Fatherhood is great because you can ruin someone from scratch.” — Jon Stewart

19. "The bedtime routine for my kids is like this Royal Coronation Jubilee Centennial of rinsing and plaque and dental appliances and the stuffed animal semi-circle of emotional support. And I’ve gotta read eight different moron books. You know what my bedtime story was when I was a kid? Darkness!" — Jerry Seinfeld

20. "I accidentally dripped some mustard on my newborn daughter’s forehead and long story short a nurse just walked in and saw me lick the baby." — James Breakwell

21. "Looking up from my phone just doesn't have the same effect as snapping down and folding a newspaper. It's hard being a dad these days." — Simon Holland

23. "What changes when you become a dad? Once a month, a normal morning begins with a kid saying, 'Dad, I puked in my bed.'" — Tobin Walsh

24. "My toddler was playing under the sheets with his grandma yesterday and gave her the dutch oven. So proud." — Fatherhood Life

25. "Advantage of being a chemist: recognizing that a bit of vegetable oil will safely remove dried out silly putty from kid's sheets." — Blair King