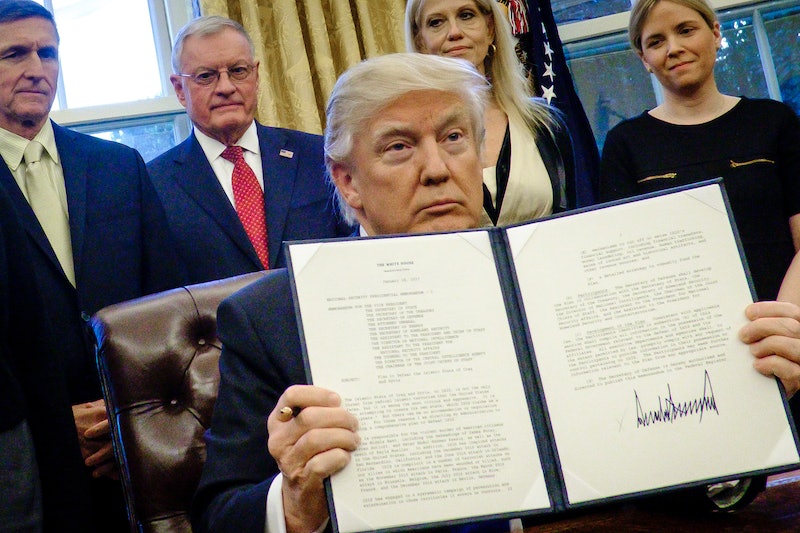 In his first three weeks in office, President Donald Trump has wasted no time getting down to the business he warned us he would during his campaign. So far, that's meant blocking immigrants and refugees, beginning to dismantle Obamacare, demanding a wall along the U.S.-Mexico border, giving the green light for the Keystone XL and Dakota Pipelines, and quite a few other scary measures. Thankfully, there are things to help us laugh instead of cry. The internet has taken Trump's executive orders and turned them into memes.

Since Trump is into boosting the drama on his presidency (just look at his prime-time televised SCOTUS nominee announcement) these memes really embody the way he seems to be so proud of everything he signs. And he's signed a lot. Unfortunately, he also has the ability to sign a lot more. President Franklin D. Rosevelt signed a whopping 3,721 executive orders while he was in office. Recent presidents haven't signed quite that many — they usually get in a few hundred.

Although reports claim that Trump's daughter Ivanka worked to eliminate an expected LGBTQ order, there could well be other orders of a similar nature in the pipeline that would be used to limit civil rights and discriminate against the most vulnerable.

So take a moment of levity in this tense situation and focus on some of these Trump jokes. Thankfully, there are a lot of them.

1. The Truth Is Revealed

What we all suspected is now shown via meme.

2. Trump Shows Off His Drawing Skills

He does do a good impression of a three-year-old drawing a flower.

3. His True Feelings About Anime Are Revealed

Did any reporters think to ask him his opinions about anime on the campaign trail?

4. Trump Experiences A Moment Of Self-Awareness

5. Trump Played The Same Drawing Game You Did In Seventh Grade

A favorite bored pastime of seventh-graders nationwide, as well as the president.

Only three easy steps are needed to protect our border.

7. A Hat-Tip To His Great Friend Kanye

The casting call worked out so well for Kanye, after all.

9. He Knows Some Things

If you keep to the basics, everything will be fine.

10. An Important Announcement For America

Honestly, this is an executive order we could all get behind.

11. Even Bloomberg Businessweek Put A Meme On Its Cover

A burn that is not only clever, but scarily real.

Trump said he would help out small businesses, right?

Ah, an order most drivers could all get behind.

15. Bringing Back An Old College Favorite

Reminding us of the Super Bowl that brought back election night feelings for so many Americans.

It's actually very sad that this is a meme.

I think he's trying to tell us something.

A nice little rhyme about the border wall.

Many people would probably get on board with this.

This would be pretty well-received, I imagine.

25. Using His Executive Order To Show Off His Pokemon Collection

These memes are harmless stabs at a president from a public that is genuinely concerned about what he may do next. Surely in the next four years (or less), Trump will write orders that we are opposed to, so now is the time to take a little breather and laugh before getting back to work talking to representatives to make sure they are challenging Trump when necessary.