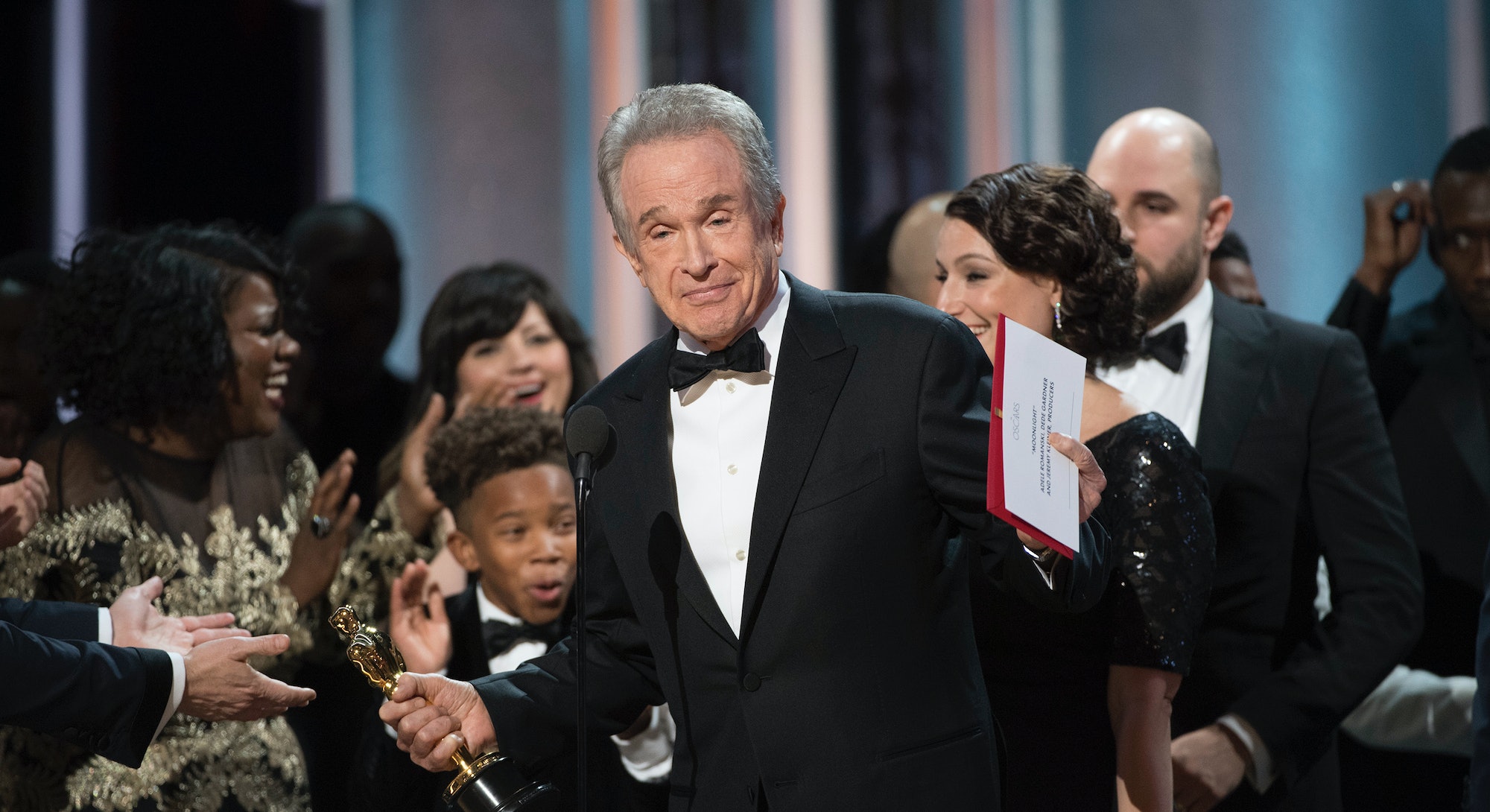 Let's face it: the Oscars are weird. One minute, they're handing out Oscars to Get Out and Moonlight, the next, Green Book is accepting the award for Best Picture. But that turnaround doesn't even come close to these wild, hilarious, and tragically real Oscar facts.

The Oscars have been around for almost 100 years — the 92nd annual Academy Awards will take place on Sunday, Feb. 9. That's a lot of winners, losers, and surprises (hello, Oscars streaker of 1974) to keep track of. And if you want to impress everyone at your Oscars party, you're going to need to know some fun facts and trivia that no one else knows, and that's where these come in.

If you're hosting, impress your guests by whipping out some knowledge about that time Barbra Streisand probably caused a rare tie at the Oscars. Or, wax poetic about all the Oscars Amy Adams doesn't have during the commercials. Yes, some of these Oscar facts are a little depressing, like how the Oscars have never nominated the same female director twice. But hopefully the 2020 Oscars will make some of the more frustrating Oscar facts obsolete. As for the others, well, they're too great to give up.

Sarah Y. Mason was the first woman to win Best Adapted Screenplay, and she took home the prize for something a little familiar this year: Little Women. Let's hope history repeats itself again and Greta Gerwig takes home the same award this year.

2. The 2020 Str8UpGayPorn Awards Nominated More Women Directors Than The Academy

3. Only 5 Women Have Ever Been Nominated For Best Director

4. There Have Been More Ties Than Female Best Director Noms

Ties at the Oscars are a rarity — there's only been six of them in the history of the show. But that's still more than the five women who have been nominated for Best Director.

5. One Tie May Have Been Caused By Barbra Streisand

In 1968, then-Academy president Gregory Peck admitted the legendary Streisand into the Academy before she even made her film debut for Funny Girl, making an exception to protocol at the time. At the 1969 Oscars, she won Best Actress for her role in Funny Girl in an exact tie with Katharine Hepburn (who else?). They both earned 3030 votes, and if Streisand indeed voted for herself, she could have caused her own tie at the Oscars.

Despite being one of the most well-known directors of our generation, Tarantino actually hasn't won an Oscar for directing, which seemed like a given. His two Oscar wins have been in the screenplay categories. However women have taken home the coveted prize, with Kathryn Bigelow taking home the award for The Hurt Locker in 2010.

7. Shark Tale Has An Oscar Nomination, But Hustlers Does Not

Shark Tale — yes, the movie that taught you "Car Wash" when you were in elementary school — has a nomination for Best Animated Feature, which is more than actually acclaimed films like Uncut Gems, Hustlers, and Portrait of a Lady on Fire.

The men of Three 6 Mafia won Best Original Song for "It's Hard Out Here For A Pimp" from the film Hustle & Flow in 2006, and thus became the first rap group to win an Oscar. Adams has six nods, but zero wins. In fact, Eminem, Sam Smith, Pirates of the Caribbean, Shrek, and Suicide Squad also have more Oscars than the actor.

9. Just Like Amy Adams, The Oscars Have Also Been Robbed

The Oscars were literally robbed when 55 Oscar statuettes were stolen by two men in March 2000. 52 of the trophies were found near a trash bin just over a week after the theft, per CBS News, and one of the three remaining awards was randomly discovered during a drug investigation three years later. There's still no word on where those other two pesky Oscars are.

The 2019 Lion King reboot received mixed reviews and wasn't classified as an animated film by the Academy. Even if the critically acclaimed Uncut Gems was unjustly snubbed, you'd think it's at least in the same boat as The Lion King. But no. As pointed out by Matt Singer, with the reboot's Best Visual Effects nod, The Lion King has more Oscar noms than Uncut Gems. The Academy clearly prefers their gems cut.

12. But Back To Amy Adams... Even Dean From Community Has More Oscars Than Her

Jim Rash won the Best Adapted Screenplay Oscar for The Descendents in 2012. And then proceeded to use his crowning moment to mimic Angelina Jolie's infamously leggy red carpet pose from earlier that night. It was better than half of the speeches, but still doesn't make up for Adams' lack of a trophy.

13. Only One Woman Has Ever Been Nominated For Best Cinematography

Rachel Morrison received the Best Cinematography nod for Mudbound in 2018, and prior to that, it was the last gender-neutral category at the Oscars to not have a female nominee. Sadly, she didn't win.

As reported by The Guardian, out of 379 total nominations for Best Picture (after 1950, when individual producers started being awarded rather than production studios), only 13 of them have gone to women solo. Women have frequently won Best Picture when producing films alongside men, including Dede Gardner, who is the only woman to win the award twice, for 12 Years a Slave and Moonlight. But no woman who was nominated solo (or with only other women) has taken home the prize.

15. Only 3 Asian Actors Have Ever Won Acting Awards Out Of 16 Total Nominations

Put into context, that's one less than Katharine Hepburn won over the course of her career — she's the most decorated actor in Academy history, having won four trophies. Even worse is that Hepburn was guilty of yellowface herself, in 1944's Dragon Seed. (That role was not one of her many nominations.)

Two white female actors, Luise Rainer and Linda Hunt, won Academy Awards for playing Asian women in The Good Earth in 1938, and The Year of Living Dangerously in 1984, respectively. But, as noted by Nancy Wang Yuen on Twitter, Miyoshi Umeki is the only Asian woman who has won an Oscar in an acting category. Ever. Umeki took home her Oscar in 1958. And in the 52 years since, the Academy has given out one Oscar to a white woman playing an Asian woman, not to mention, the U.S. has gone through 11 presidents, astronauts landed on the moon, and A Star Is Born and Little Women were both remade twice.

Green Book and Crash both received mixed reviews and flack for how the films handled race relations, but both managed to win three Oscars, including the top prize of Best Picture. Meanwhile Selma, which was widely praised for its accurate, heartbreaking portrayal of Martin Luther King Jr. and the civil rights movement, lost Best Picture and only took home one Oscar. Sounds about white.

18. There Was Actually An Oscar Moment More Cringe-Worthy Than 'La La Land' "Winning"

During the fourth Academy Awards, actor Norma Shearer presented Best Actress, which she was nominated for that year. She didn't win, but the moment ensure maximum awkwardness whether she had won or not. Needless to say, nominees are no longer allowed to present awards that they're up for.

That might sound like a fair amount, but given that the Oscars have been around 92 years, it's not a high percentage, especially considering the fact that the Oscars give out four trophies to actors every year. To put into context, that's less than the amount of Oscar nominations Meryl Streep has under her belt (21).

20. Only One Woman Of Color Has Won Best Actress

Halle Berry is the only Black woman, and only woman of color full-stop, to win the Best Actress in a Leading Role category at the Oscars, taking it home in 2002 for her role in Monster's Ball.

21. Only One Black Female Actor Has Been Nominated After Winning An Oscar

Octavia Spencer is the only Black woman to be nominated in the acting categories after winning her first Oscar, which she received in 2011 for The Help. She was then nominated in 2017 for Hidden Figures, and once again the following year for The Shape of Water.

22. The 2019 Gift Bags Cost More Than Some Best Picture Nominees Made At The Box Office

The 2019 Oscars gift bag, gifted to all of the winners every year, cost whopping $148,000 per bag. There were a total of 51 winners last year, meanings the bags altogether amount to a whopping $7,548,000. That's more than what Best Picture winners Hamlet, All the King's Men, and An American in Paris earned at the box office when they were released (without adjusting for inflation).

23. A Winner Was Nominated 20 Times Before Finally Winning

Sound mixer Kevin O'Connell was nominated literally 20 times in the sound categories from 1984 to 2008 (sometimes twice in the same year) before finally winning in 2017 for Hacksaw Ridge. Maybe our wait for Amy Adams' moment isn't so bad after all.

24. Disney Has More Oscars Than Literally Everyone

No, we don't mean Disney as a company. Walt Disney has the most Oscars of any person ever, with an astounding 32 wins out of 59 nominations. He has won more trophies than the number of Black and Asian actors who have won Oscars, and the amount of women nominated for Best Director combined.

An X rating didn't stop Midnight Cowboy from taking home the big prize of Best Picture in 1969. It was downgraded to an R rating two years later, but the point still stands.

What makes this even worse is that Polanski won his Oscar as a convicted rapist, taking home Best Director for The Pianist in 2003. Meanwhile, Bigelow remains the only woman to ever win the prize.

On a much lighter note, women made history in 2019 by winning 15 Oscars, a record-breaking number for wins in a single year.