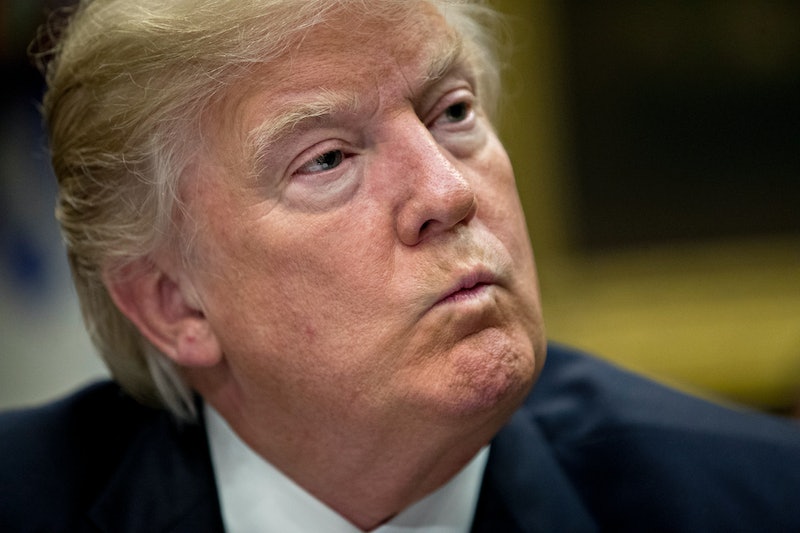 Since Donald Trump's election victory, I've often found myself wondering if I'd somehow stepped inside an episode of The Twilight Zone. Between inflammatory false statements, tweeted attacks on members of Congress, and a war on America's free press, the news from the White House often feels more surreal than real nowadays. Although he's only been in office a few weeks, Trump's made enough ridiculous statements to last voters the next four years. Take a trip down memory lane with a roundup of 27 outrageous things President Trump has said since taking office Jan. 20.

While Trump may be one of the most unpredictable presidents to occupy the White House, there's one thing he can always be counted on for — issuing totally ludicrous statements that inspire outrage, disbelief, and confusion. And while it's understandable to wonder if you've mistakenly picked up a satirical newspaper, all too often the reality is that yes, President Trump really did say that. Between frequent false claims and inflammatory tweets, Trump has certainly kept voters and the media on their toes since he was sworn in as the 45th president of the United States.

Here are 27 outrageous things Trump has actually said since he was sworn in as president:

"Watched protests yesterday but was under the impression that we just had an election," Trump tweeted Jan. 22 in regards to the Women's March on Washington. "Why didn’t these people vote? Celebs hurt cause badly."

"I get up this morning and I turn on one of the networks and they show an empty field," President Trump said in reference to media coverage of his inauguration during a speech given at CIA Headquarters Jan. 21. "I said wait a minute, I made a speech, I looked out, the field was— it looked like a million, a million and a half people. … [I]t went all the way back to the Washington Monument."

"But if you think about it, Mike, if we kept the oil, you probably wouldn't have ISIS because that's where they made their money in the first place, so we should have kept the oil," Trump said, dropping an offhand remark about violating international law into his speech at CIA Headquarters on Jan. 21. "But okay. Maybe you'll have another chance."

5. Fox News Is Number One

"Congratulations to @FoxNews for being number one in inauguration ratings," Trump said in a tweet posted Jan. 25. "They were many times higher than FAKE NEWS @CNN - public is smart!"

6. God Looked Down and Said

"It was almost raining," Trump told CIA staff Jan. 21 about his inauguration speech. "[T]he rain should have scared them away, but God looked down and he said, we're not going to let it rain on your speech." (Side note: It totally rained throughout Trump's swearing-in ceremony and inauguration speech.)

"You have a bunch of bad hombres down there," the Associated Press reported Trump told Mexican president Enrique Peña Nieto in a Feb. 2 phone call. "You aren't doing enough to stop them. I think your military is scared. Our military isn't, so I just might send them down to take care of it."

"Look forward to seeing final results of VoteStand," Trump said Jan. 27 in a tweet citing unverified claims of voter fraud made by a Texan businessman. "Gregg Phillips and crew say at least 3,000,000 votes were illegal. We must do better!"

"Last month, we celebrated the life of Reverend Martin Luther King, Jr., whose incredible example is unique in American history," Trump said in a Feb. 2 speech that was supposed to be about honoring the contributions of African Americans as a kick off to Black History Month.

"Thr [sic] coverage about me in the @nytimes and the @washingtonpost gas [sic] been so false and angry that the times actually apologized to its dwindling subscribers and readers," Trump tweeted Jan. 28. "They got me wrong right from the beginning and still have not changed course, and never will. DISHONEST."

"Somebody with aptitude and conviction should buy the FAKE NEWS and failing @nytimes and either run it correctly or let it fold with dignity!" Trump tweeted Jan. 29.

"This is the worst deal ever," the president reportedly told Malcolm Turnbull in a phone call last week. During the conversation, the Australian prime minister reminded him of America's commitment to take in 1,250 refugees currently being held in Australia. According to The Washington Post, Trump also told Turnbull that their conversation "was the worst call" he'd had that day "by far."

"The joint statement of former presidential candidates John McCain & Lindsey Graham is wrong," Trump tweeted Jan. 29 after the two senators criticized his executive order on immigration. "They are sadly weak on immigration. The two Senators should focus their energies on ISIS, illegal immigration and border security instead of always looking to start World War III."

16. A Tremendous Victory. The Greatest Ever

"No, no, you have to understand, I had a tremendous victory, one of the great victories ever," Trump told ABC's David Muir in a Jan. 25 interview during which he apparently forgot he'd lost the popular vote by nearly 3 million votes. "In terms of counties I think the most ever, or just about the most ever."

17. The Tears Of Senator Schumer

"Only 109 people out of 325,000 were detained and held for questioning," Trump tweeted Jan. 30 about the fallout from his controversial executive order on immigration. "Big problems at airports were caused by Delta computer outage, protesters and the tears of Senator Schumer. Secretary Kelly said that all is going well with very few problems. MAKE AMERICA SAFE AGAIN!" Statements from the Trump White House, however, said the executive order affected a lot more than 109 people. Homeland Security said 721 people had been denied at airports while a Justice Department lawyer claimed 100,000 visas had been revoked.

18. California Is Out Of Control

"California in many ways is out of control, as you know," Trump told Fox News' Bill O'Reilly during a Feb. 5 interview. "Obviously the voters agree, otherwise they wouldn’t have voted for me." Trump suffered a staggering loss in California to Democratic nominee Hillary Clinton with votes split 62 percent to 32 percent.

"Yes, Arnold Schwarzenegger did a really bad job as Governor of California and even worse on the Apprentice...but at least he tried hard!" Trump tweeted Feb. 3.

"Big increase in traffic into our country from certain areas, while our people are far more vulnerable, as we wait for what should be EASY D!" Trump tweeted Feb. 8.

21. "I Don't Even Think It Was Controversial"

"As you know, I approved two pipelines that were stuck in limbo forever. I don't even think it was controversial," Trump said Feb. 7 in a meeting with the National Sheriff's Association. "Years of getting approvals, nobody showed up to fight [the Dakota Access Pipeline]. This company spends tremendous — hundreds and hundreds of millions of dollars, and then all of a sudden, people show up to fight it. It's not fair to our companies."

"The opinion of this so-called judge, which essentially takes law-enforcement away from our country, is ridiculous and will be overturned!" Trump vowed in a tweet published Feb. 4.

"Prime Minister Abe, on behalf of the American people, I welcome you to the very famous White House," Trump said Feb. 10 while welcoming Japan's prime minister during an official state visit.

"Because the ban was lifted by a judge, many very bad and dangerous people may be pouring into our country. A terrible decision," Trump tweeted on Feb. 4. The next day, he continued:

Just cannot believe a judge would put our country in such peril. If something happens blame him and court system. People pouring in. Bad!

"SEE YOU IN COURT, THE SECURITY OF OUR NATION IS AT STAKE!" Trump tweeted after a federal court refused to reinstate his executive order Feb. 9.