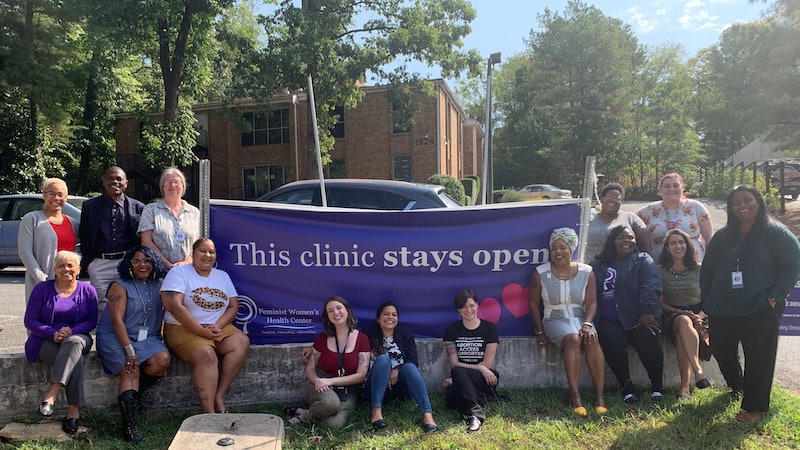 Abortion care is known as a "women's issue." The pro-choice movement uses slogans like "her body, her choice," and abortion clinics often have "women" in their names. Gendered language, however — paired with the widespread discrimination transgender people face in health care — means many trans and non-binary people avoid seeking care altogether.

No statistics are available on how many trans people receive abortions annually, but the number is thought to be relatively small. A 2018 study of 450 trans men and gender non-conforming individuals found that 6% experienced unplanned pregnancies. Of that group, 32% opted to terminate them.

Finding a health care provider who will use people's proper names and pronouns, let alone someone who knows how to treat trans people, isn't easy. A 2016 study of more than 3,000 trans people nationwide found that about 25% were denied equal treatment in health care settings. Additionally, a 2017 study found that 20% of trans adults are uninsured and nearly half have postponed medical care or avoided preventive care because they couldn't afford it.

Some clinics are trying to fill these gaps in their communities by making abortion care purposefully inclusive, and they're also specializing in transgender health care so people can receive the holistic care they deserve. Here's what that looks like.

Located in Pennsylvania's Lehigh Valley area, home to a dozen colleges and universities, Allentown has increased its inclusive abortion and health care coverage due to demand from young people, says AJ Schaffer, the clinic's transition support coordinator. In addition to abortion care, Allentown offers a transition support program, which serves about 650 patients.

Since 2012, they've implemented staff training and changed their terminology, opting for phrases like "pregnant people," "people with uteruses," or "people who can become pregnant" instead of "women," he says.

Schaffer says the staff's diversity also means a lot to patients. "You have to put the people that represent those populations in the positions of authority and outreach and marketing and everything," says Schaffer, noting that transgender and non-binary patients are more likely to talk to someone who's also transgender over a cis social worker.

When Schaffer talks with other clinics about offering similar care, though, he gets pushback from older staffers. "The need for services outweighs the comfort level of a few staff [members] who don't want to get on board," he says. "If you can't serve the patients competently and affirming[ly] then maybe you shouldn't be doing that job. We're not too old to learn."

At CHOICES - Memphis Center for Reproductive Health, staff can be written up for misgendering someone. "We needed to underpin behaviors and beliefs that we wanted culturally ingrained in our clinic with some human resources policies," says Katy Leopard, the site's director of external affairs.

For six years, the independent abortion clinic has been part of the Human Rights Campaign's Healthcare Equality Index, which trains and evaluates facilities based on their LGBTQ-inclusive patient, visitation, and employment policies. As part of the group's efforts, they've invited trans people to evaluate their processes.

Now, their lobby is full of diverse images, reflective of their patient population, including some who travel up to 300 miles to receive abortion-, transition-, and general-wellness care. They've also hired a more diverse staff. "It takes a lot for a trans person, who's been victimized by the health care system and by their community, to [feel] comfortable to get a pap smear or prostate exam. We have become a safe haven," Leopard says.

"Because we're a feminist health care provider, the people receiving care are the ones in control," says Kwajelyn Jackson, the executive director of the Feminist Women's Health Center. "They're the ones who determine how quickly we [administer care] and what happens next."

In 2000, the Atlanta clinic created a new branch, its Men's Health Clinic, after the death of Roberts Eads, a trans man who died of ovarian cancer the year prior after more than a dozen doctors refused to treat him.

Jackson says the clinic operates with a reproductive justice framework, which centers on those who are most marginalized, including people of color and trans folks. "Abortion providers are particularly well-equipped to deal with the stigma and shame that our patients often encounter in other spaces," Jackson says.

The center ensures it can serve people from any background. It has anti-oppression training about unconscious bias, as well as patient care techs and advocates whose job is to support people getting abortions.

Pelvic exams and procedures like abortions can be painful and even traumatic for some trans patients. The center ensures that patients understand procedures, and in cases where a patient has experienced trauma or assault, "we want to make sure that the patient feels in control of the experience," says Jackson, referring to their informed consent process.