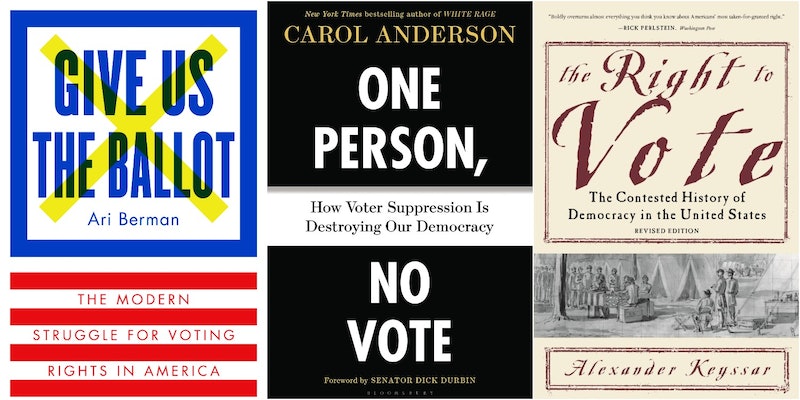 It's become a common refrain on social media: You counter a post about a mass shooting, a police shooting, or threat of a devastating executive order with "VOTE" or #GoVote or "Oh my god please, I'm begging you, vote." It absolutely makes sense. According to CNN, voter turnout in the 2016 presidential election was at a 20-year low. Even in 2008, considered a high point for the country's voting history, only about 64 percent of eligible voters punched a ballot. But despite its public persona — voting as a right, not a privilege, voting as ugh, so easy, so simple — voting has long been an act clung to tightly by certain populations. And for others, it's often been held out of reach. These three books on the history of voting rights will explain why it's more complicated than #GoVote.

The history of voting in the United States is a deeply fractured story, one frequently punctuated by racism, classism, and sexism. Americans often learn in school about the suffrage movement of the 1920s. It's an easily teachable moment in history — of course women should have the right to vote! But it's also, in part, a story of white women succeeding on the backs of disenfranchised African-American women.

The Voter Rights Act of 1965, signed into law by President Lyndon B. Johnson, is often heralded as a crowning achievement of the Civil Rights Movement. After all, it made illegal the common practice of denying or suppressing votes within minority communities. But Americans often lose sight of its course after the 1960s. We forget that a major provision, which kept a watchful eye over areas with a history of racially-motivated voter suppression, was deemed unconstitutional in 2013 by the Supreme Court.

Even today, voter identification requirements have sufficiently snuffed out eligibility for entire communities. Poll closures, combined with a lack of public transportation, physically bar people from casting their votes. Gerrymandering, the re-drawing of political boundaries to give a certain political party a numerical advantage, have stolen the voice of counties and states across the country. And we forget that for certain communities, the idea of fulfilling a civic duty for a country with policies and politicians who systematically chip away at your humanity isn't exactly a selling point.

So while voting, yes, is important and necessary and vital, you must understand its history when you step into that voting booth. Know that for many people, "just go vote" is much more complicated a request.