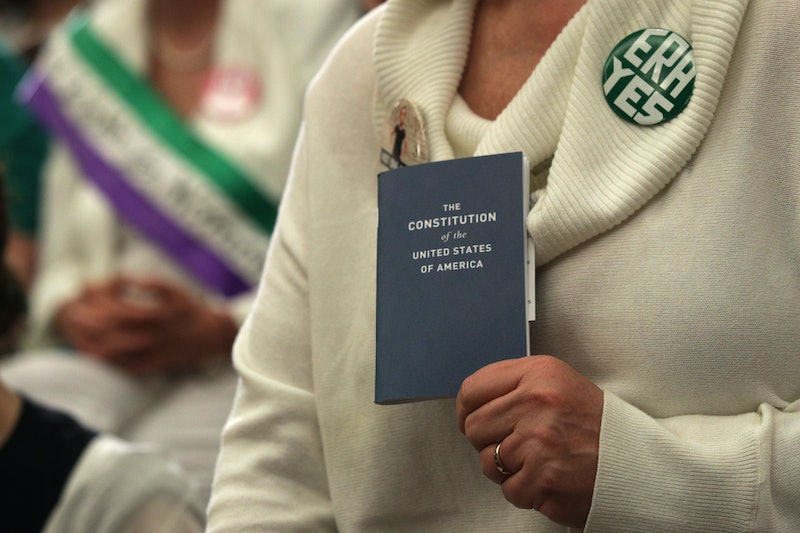 The Equal Rights Amendment, which would ban discrimination on the basis of sex, was first proposed in 1923. Since then, 37 states have passed the amendment, or added a version to their state constitutions, but 38 are needed to enshrine it in the U.S. Constitution. Nearly 100 years later, Virginia became that final, 38th vote on Jan. 15. But three GOP attorneys general have filed a lawsuit to stop the Equal Rights Amendment from being added to the constitution — a move that ERA supporters have called anti-equality.

Virginia Attorney General Mark Herring tells Bustle that the lawsuit is "ridiculous." "The ERA is something that should have been passed and ratified a long time ago," he says. "It is past time for women's equality to be constitutionally guaranteed."

Congress first passed the Equal Rights Amendment in 1972 with a seven-year deadline for states to approve it. That deadline was later extended to 1982, but by then only 35 states had ratified it, according to NPR. The House has since introduced legislation to eliminate the deadline, and in the last few years, Nevada and Illinois passed the ERA, bringing the total number of states to ratify it to 37. When Virginia Democrats took back control of the state legislature in November 2019, the incoming House speaker, Eileen Filler-Corn, told The Hill that passing the ERA would be a "top priority" when the legislature started its next session.

In December, three GOP attorneys general from Louisiana, Alabama, and South Dakota filed a preemptive lawsuit in Alabama, arguing that the original ratification deadline is still enforceable and that five states — Nebraska, Tennessee, Idaho, Kentucky, and South Dakota — rescinded their ratifications. Alabama Attorney General Steve Marshall, one of the three who filed the lawsuit, said in a statement that adding the ERA to the constitution 40 years later ignores those recissions and the deadline. “The people had seven years to consider the ERA, and they rejected it," Marshall said in the statement. "To sneak it into the Constitution through this illegal process would undermine the very basis for our constitutional order."

"What passage of the ERA will mean is that America will be a more fair and a more equal place. And that's a good thing."

Herring says that once Virginia passes the ERA, "We will be using all the tools we have at our disposal to ensure that it's added to the constitution. That might mean intervening in a ridiculous lawsuit that a couple of states have filed in Alabama, or it could mean filing a lawsuit of our own."

He points out that Article V of the Constitution allows Congress to decide how to propose an amendment, but it doesn't allow Congress to limit when a state can ratify that amendment, which means the deadline might not matter at all. "The 27th Amendment, which was adopted in 1992, was first presented to the States in 1789," Herring says. Unlike the 27th amendment, which deals with pay raises for members of Congress, the ERA would help around half the population. "And this is something that is critically important — to make sure that women's equality is guaranteed in the constitution," he says.

Herring also notes that the constitution isn't clear on whether states can rescind their ratification — the issue isn't specifically mentioned in Article V. But in the past, states that have revoked their support for amendments have still been included in official tallies by both the secretary of state and Congress, suggesting that you can't really take back that decision.

In Marshall's statement about the lawsuit, he also said that the policy impacts of ratifying the ERA would promote a "far-left" agenda. "Where states have passed their own state-law versions of the ERA, courts have interpreted them to invalidate reasonable restrictions on abortion, require states to fund abortions, and mandate that boys be allowed to compete in sports against girls," he said.

Herring says Marshall's comments are scaremongering. "Abortion rights are constitutionally protected — they have been for half a century," he says. "And what passage of the ERA will mean is that America will be a more fair and a more equal place. And that's a good thing."

The Democratic Attorneys General Association (DAGA) condemned the lawsuit on Jan. 7. "We stand with women and for equality," the group said in a statement. "Unfortunately, we cannot say the same of these Republican Attorneys General. We urge our colleagues from across the aisle to reconsider this wrongheaded waste of taxpayer dollars. It’s 2020, not 1920."

"There is a national debate on how it is for women to be equal in this country."

Lizzie Ulmer, communications director at the DAGA, tells Bustle she's surprised that in 2020 GOP attorneys general would be "putting out such an anti-woman and anti-equality agenda, especially when we know that [the ERA] is something that is supported by a majority of Americans." Marshall, Louisiana Attorney General Jeff Landry, and South Dakota Attorney General Jason Ravnsborg have not responded to Bustle's request for comment.

Louisiana Solicitor Liz Murrill, who is also lead counsel on the lawsuit for the state, tells Bustle in an email that the lawsuit is not about personal or political preferences, but about "upholding the rule of law" and "preserving the integrity of the amendment process."

She says the ERA would "undercut many of the hard-fought protections that ensure women are treated fairly in America," such as WIC, a nutrition program for women and children, and criminal protections in the Violence Against Women Act, because it prohibits laws that give benefits to only women or men.

But Leila Abolfazli, director of Federal Reproductive Rights at the National Women's Law Center, says that isn't true. "Laws and policies that seek to remedy past and ongoing discrimination against women would not violate the ERA," she says. She says WIC, for example, is aimed at safeguarding the health of low-income women, infants, and young children at nutrition risk. Eligibility for WIC is related to "fiscal characteristics associated with childbearing," she says, and doesn't discriminate against men; foster parents, guardians, and single fathers who care for or have custody of their children can also get WIC.

The timing of the lawsuit, at the start of an election year, is bold. Abolfazli notes that the country is in a moment of "reckoning on gender equality" that began with the worldwide Women's March in January 2017. "There is a national debate on how it is for women to be equal in this country," Abolfazli says, pointing to the #MeToo movement and mass protests against abortion bans. She says the filing isn't really about a substantive legal argument, but rather "the objections to the ERA are objections to principles of gender equality."

Editor's note: This piece was updated on Jan. 15, 2019, to reflect that Virginia's general assembly passed resolutions to ratify the ERA.

More like this
25 Inspiring Quotes From Black Women To Celebrate Black History Month
By Kyli Rodriguez-Cayro and JR Thorpe
24 History-Making Black Women You Probably Didn't Learn About In School
By Ayana Lage and JR Thorpe
6 Organizations Fighting Police Brutality That You Can Support Right Now
By Syeda Khaula Saad and JR Thorpe
Twitter Is Identifying With Sally Field & Jane Fonda’s Friendship In New Viral Video
By Jake Viswanath
Get Even More From Bustle — Sign Up For The Newsletter
From hair trends to relationship advice, our daily newsletter has everything you need to sound like a person who’s on TikTok, even if you aren’t.

This article was originally published on Jan. 8, 2020