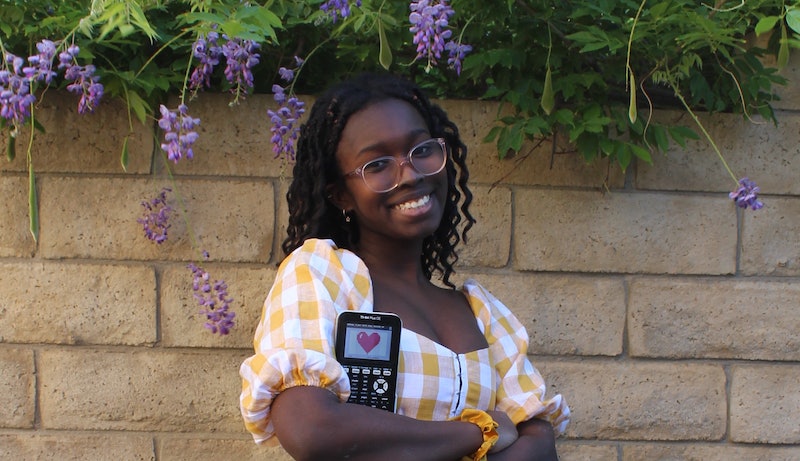 As phones capture police brutality at Black Lives Matter protests and online K-Pop fans derail Trump's rallies, the intersection of technology and social justice is more important than ever before. And the next generation of coders are already reshaping how we'll address injustice, make safe spaces, and feel empowered in decades to come. In June, Apple announced the 350 winners of its Swift Student Challenge, which recognizes outstanding student app developers, and were recently celebrated at WWDC20, Apple's yearly development conference. The sessions from the conference, which was virtual this year, can still be streamed for free on Apple's developer app. Bustle caught up with Lisa Jackson, vice president of Apple's Environment, Policy and Social Initiatives, and three winners about the realities of developing apps for social justice.

Jackson, who's the head of Apple's newly announced $100 million Racial Equity & Justice Initiative, says that supporting students is a core part of their strategy in battling systemic inequalities. "We believe in the power of education. Coding and the ability to access it [can] be transformational," she says. The Initiative is targeting education, economic equality, and criminal justice reform as its major focuses. It's heavily invested in fostering young voices, and an upcoming developer camp is aimed at supporting young Black developers who are developing app-driven businesses. "You never know where the idea that’s going to change the world will come from," Jackson says.

Here are three of the Swift Challenge winners on how they're making social justice happen via technology.

Ongele, a 19-year-old student at Fordham University, created the app ReDawn in 2017 after a friend was sexually assaulted in her first weeks of university. "It was just really harrowing to see the situation from the sidelines," she tells Bustle. "I wanted to create an app that allows you to get access to this information in a confidential manner and also connects you to local resources." The app combines a chatbot, which allows users to anonymously access information, a map for researching local treatment centers, and a recorder for survivors to tell their story.

Developing ReDawn came with challenges. "The idea of putting your work out there for people to rip apart is hard," Sofia says. "There's a fair share of internet trolls. The majority of people in programming do not look like me." But she hopes that the app will help shift the landscape for sexual assault survivors.

"I really hope that with the app people are able to know that these resources are available and not feel stigmatized," she says, pointing out that a considerable number of survivors don’t seek out victim services.

Ongele is now developing apps that focus on civil engagement, whether it's sending emails to local councilmembers or getting Gen Z invested in the 2020 election. She's enthused about technology's potential for empowerment. "There's such a significant power in TikTok teens and K-Pop fans," she says "It's really amazing to see how a group of empowered people can create so much change even remotely." Teens, she says, can push for change in their local communities — and technology gives them the tools to do it.

Rivera, an Afro Latin son of immigrants, was compelled to create Liberate Meditation, an app that produces content for and by people of color focusing on mental health, based on his own experiences at community meditation in New York City devoted purely to people of color. "I was inspired by the transformation I experienced in meditation spaces dedicated only to people of color," he tells Bustle. "Being in an environment when there were only Black and brown folks that I was meditating with allowed me to relax and go deeper into my meditation." The space allowed him to feel more vulnerable in a supportive place, and helped him to be more compassionate towards himself.

That was the spark that pushed him to release Liberate in 2019, and it has since been downloaded over 50,000 times worldwide. "Safe spaces for Black people are hard as it is, and when you throw a pandemic in, it makes it much more difficult," he says. "People are leaning on technology for gathering, so there's more opportunity to create safe spaces." He's focusing on developing Liberate further; it's moved from being funded by donations to a subscription-based system, and he foresees a future for its virtual online gatherings with meditation teachers.

Rivera believes that technology, including apps like Liberate, can help create support systems that might challenge the effects of systemic inequality. "I see opportunities for helping corporations create safe spaces for their Black employees, to support them and their mental health," he says. "There's a lot happening in the world and part of me wants to help so many."

Hairston, 24, is a graduate of Yale with a degree in computer science and African American studies. "I was the only black woman CS major for a while at Yale, and I really wanted to have a mentor or role model that I could look up to — a way to see what it could look like for me to be successful," she tells Bustle. "That didn't really exist." In her senior year, she created Zimela, an app that connects underrepresented people in tech with mentors and career opportunities.

Hairston was inspired to create Zimela — which means “representation” in the South African language isiXhosa — by her foster sister Kimmy, who won a place in a program that connected high-achieving low-income students to elite prep schools. "Zimela came from the idea that everyone deserves a Kimmy," she says. "Everyone deserves to see themselves represented in the spaces they aspire to." She learned early in her career that, in tech, it's not about what you know but who you know. "That creates a cycle of exclusion for people who deserve to be in these spaces and can thrive," she says. "My hope is Zimela is a way to bridge that gap for people who may not have a robust network nor have family in tech or in the field that they want to be in."

Developing the app presented its own obstacles. "Coding is sometimes said to be not welcoming to girls because you have to literally break things in order to succeed," she says. "At first, it felt really intimidating and overwhelming because I didn’t know where to start. The hardest part was being OK with messing up, so that I could learn and fix it as I went."

Hairston believes that technology can reshape the world. "I’ve been able to witness how technology can amplify voices that historically have been silenced," she says. "It gives marginalized people the voice and momentum to make a movement be heard." But developers, she says, tend to solve problems they experience themselves, which is why it's so important to have diversity. Zimela has now been tranformed into EdLyft, a startup aiming to create the next million Computer Science college students. "The app's mission has since transformed from just being able to see yourself, to being equipped to be in these roles and spaces," she says.

More like this
Ashamed Of Your Screen Time Stats? Here's How To Change That
By Alexis Morillo
11 Super Bowl Instagram Captions To Use On Game Day — Even If You Don’t Like Sports
By Alexis Morillo
This Wordle Rival Is Taking Social Media By Storm
By Sam Ramsden
25 Galentine's Day Games To Play On Zoom With Your Long-Distance Besties
By Mia Mercado
Get Even More From Bustle — Sign Up For The Newsletter
From hair trends to relationship advice, our daily newsletter has everything you need to sound like a person who’s on TikTok, even if you aren’t.