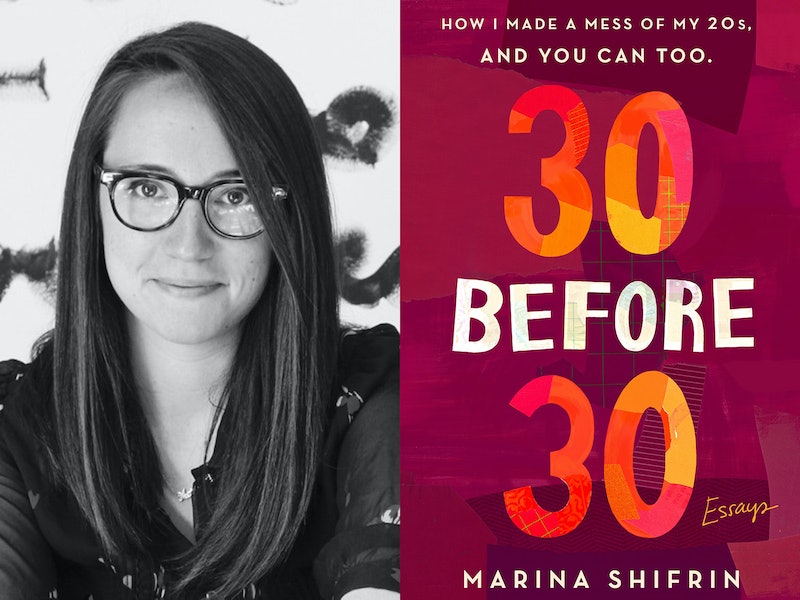 In 2013 Marina Shifrin went viral — for a video ("An Interpretive Dance For My Boss Set To Kanye West's Gone") depicting the then-25-year-old quitting her job at a Taiwanese animation company. It’s a moment Shifrin documents in her just-published essay collection, 30 Before 30: How I Made a Mess of My 20s and You Can Too, out from Wednesday Books on July 24. The collection chronicles a radical decision the writer made in her 20s — to compile a list of 30 things to accomplish before turning 30, and then actually accomplish all of them. The first item on Shifrin’s list? “Quit My Shitty Job”, of course.

Filled with other to-dos, like “Go To A Nude Beach”, “Have A Dramatic Airport Reunion”, “Go To India” and “Fall In Love (For Real)”, Shifrin’s list not only propelled her through her third decade on earth, it also became the source of the thirtieth and final item on her list: “Write A Book”. That book, 30 Before 30, is the revealing, relatable, and laugh-out-loud funny collection of essays — one that I read a mere 10 days before turning 30 myself (and at as many months pregnant.) Reading through Shifrin’s own life-changing moments — “Live In A Different Country”, “Become Famous” — while on the cusp of my own was both comforting and refreshing; as was diving even deeper into her experiences, when she connected with Bustle earlier this summer.

“It wasn’t until two-ish years after writing the list that I started taking it seriously,” Shifrin writes in an email, when I ask if there’s anything she’d say to her pre-30 before 30 self. “I was cloaked in self-doubt and so much self-censorship when it came to my whacky outside-of-work ideas. What I’d say to myself is: Quit your shitty job as soon as possible, because that silly list of goals you wrote is what’s going to help achieve your wildest dreams. Take it seriously and start it NOW."

"I was cloaked in self-doubt and so much self-censorship when it came to my whacky outside-of-work ideas."

The story of that job — and Shifrin’s viral departure — make up less than a handful of the essays in 30 Before 30, but they’re essays that stand alone in the collection, taking on a different tone than many of the other light-hearted and hilarious essays. They’re list items “Quit Shitty Job” and “Become Famous”, and they speak to the writer’s experience of sexist, gendered workplace dynamics and the hostility women face on social media — two topics that are ever-relevant in today's world.

“These chapters, I’d say, were the most complicated for me to write,” Shifrin says, when I ask if it was harder to mine the more difficult experiences of her 20s, for humor. “I’ve been told that I often hide behind my humor to avoid being vulnerable. In fact, the whole reason I quit on the internet is because I was dealing with some very difficult things in relation to my job. I was just beginning to learn the unfairness of being a young woman in a corporate work environment and rather than get litigious (which I did not think was an option for me, both financially and logistically) I dealt with it in a humorous way. On the surface, quitting on the internet is a very silly and somewhat funny thing to do, but the reality of what brought me to that decision wasn’t as funny. That’s why I knew, to give justice to the story, I had to set aside my instincts to be a comedic writer and tell the truth behind what happened. Stripping myself of humor to get a more impactful story was very difficult. I prefer to write funny things.”

"That’s why I knew, to give justice to the story, I had to set aside my instincts to be a comedic writer and tell the truth behind what happened."

As a writer and a comedian, Shifrin says she’s always loved making people laugh. But I wonder if she always sees the potential for humor in her life — even when she’s going through something difficult — or does that come later, with some distance?

“I learned the therapeutic benefits of comedy the first time I did stand-up. I was 19 and fresh off my first horrendous break up. The kind where you spend a lot of time lying on the couch, hand pressed to forehead, staring out the window,” Shifrin says. “It was very dramatic. Ryan Beck, a stand-up friend of mine, brought me to a comedy show (the only one in Columbia, Missouri, at the time) and encouraged me to get on stage. There was a comic who went up before me and talked about how he was getting a divorce and his wife was keeping the kids. He said he still had some visitation rights and that the last time he saw his children they all played The Game of LIFE. ‘My kids beat me of course,’ he told the audience, ‘not in the board game…but in real life.’ I thought that bit was so funny and devastating. It was clear that this guy just got his ass kicked by life and the only place he could process it was on stage. So, I decided to try to talk about my break up. My jokes were rough and very juvenile. I basically talked about getting broken up with via flip phone and how all my responses were autocorrected into nonsense. Autocorrect jokes are so hacky! I read my texts on stage, told a few jokes about them and got a few laughs. Not my best material, but the second I got off stage I wasn’t sad anymore. I didn’t care about the breakup. I had a new boyfriend, and that boyfriend was comedy. As soon as I looked at our relationship through a humorous lens, I couldn’t see it any other way. I’ve been ‘looking for the funny’ ever since.”

The other 28 essays in the collection range from “Donate Hair” to “Tell A Story At The Moth” to “Watch All Three Godfather Movies”. The one list item Shifrin’s embarrassed about? “Become A Muse”. “It felt so childish and vapid,” the writer says. “But I was talking to a friend who said that it was a super relatable desire and that I shouldn’t be embarrassed by it. Comedy writing, at its best, is extremely relatable so I decided to embrace the aspirations of my past. Organizing these goals in a nonlinear way that made sense for the bigger story made me realize how crucial each and every one was in pushing me forward. I didn’t start out writing my book with pride over all of these goals, but I definitely ended it with a special kind of respect for them.”

"As soon as I looked at our relationship through a humorous lens, I couldn’t see it any other way. I’ve been ‘looking for the funny’ ever since."

In addition to wholly entertaining readers and keeping them laughing, 30 Before 30 also offers a ton of advice for young women who are just starting to make their way into the post-college world. Shifrin has one particular piece of advice to highlight, however: “Be selfish. The word ‘selfish’ has such a bad connotation but I think that everyone; men, women, those who don’t identify with either category, should be selfish when they’re in their 20s. That’s the beauty of being a 20-year-old! No one expects anything from you, so you should take that time to focus on yourself. Once you’re in a relationship, or a parent, or get more responsibilities at work, you can’t really be selfish anymore (at least if you want to be a decent human). Put yourself and your goals first because no one else is going to.”

"That’s the beauty of being a 20-year-old! No one expects anything from you, so you should take that time to focus on yourself."

As far as a “40 Before 40” list? The writer says she’ll never, ever be past the list-making stage of his life. “New Year’s is my favorite holiday because everyone creates these mini-goal-oriented lists, aka resolutions,” she says. “I love it. I LOVE LISTS and I don’t care who knows it. My “40 Before 40” list is a work in progress, but I have: Read Master and Margarita, Go On Vacation Alone, Buy Land, Write For TV, Get Health Insurance, Re-Discover My Youthful Confidence, Get Closure, Organize My Digital Life, and, of course, Write (Another) Book.”

Oh yeah — one more thing readers will definitely want to know, after devouring Shifrin’s collection: has knowing how to say “I have one son” (the only phrase she managed to learn fluently in Mandarin, during her time in Taiwan) ever actually come in handy? “You know, it totally has,” Shifrin says. “My boyfriend’s family is Chinese and I was able to impress them with my limited ability to ‘speak’ Mandarin. I’m nearly positive, though, that they think I have a son with another man.”