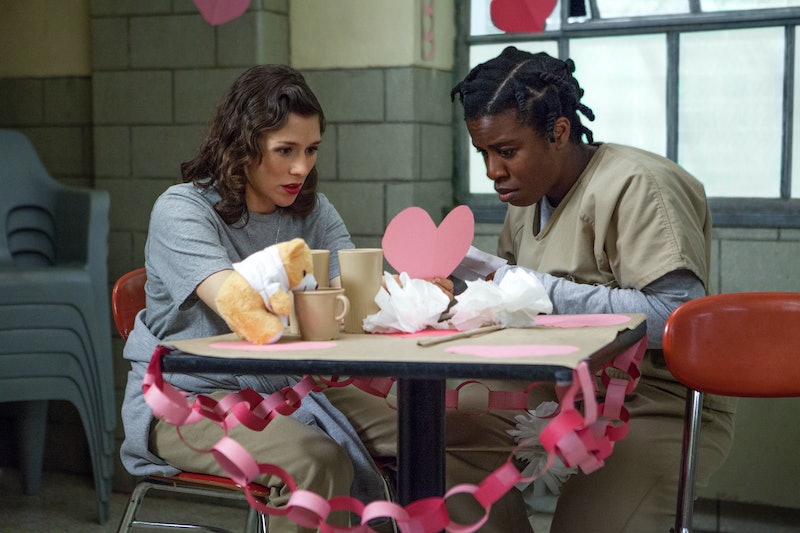 If I'm being honest, Valentine's Day hasn't cracked my list of favorite holidays since elementary school. This has little to do with my relationship status and more to do with my love of excuses to throw silly parties, which adults don't tend to do as much. Whether you're celebrating, chilling, or looking to indulge in a fictional character's life rather than your own this February, the Valentine's Day episodes on Netflix can help keep love alive.

This year, you have the option of watching Michael Bolton's Big Sexy Valentine's Day Special, if you're into that. As always, while you're on Netflix, you could skip this list and just watch ALL of Lovesick, formerly known as Scrotal Recall, instead. That is my standing recommendation, romantic or otherwise.

These aren't necessarily romantic episodes. Some of them aren't even good episodes, but I'll never tell. Everyone know that person who is extra cynical on Valentine's Day, or tries to revolt against the holiday. You know, the person who says that V-Day was invented to sell greeting cards and candy. If that's true, then clumsiness as a personality trait was invented by Hollywood to sell romantic comedies. My move as a single person is typically to lay low for a few days — which leaves me plenty of time to watch Netflix. Here are 36 episodes from 21 different shows.

30 Rock was always good at deflecting by making the holiday not about the holiday. However, that hallucination scene is epic.

It may have sparked a sisterhood movement, but the Galentine's Day episode is actually more about Valentine's Day when you sit down and watch it.

Honestly surprised that it took HIMYM this long to get into the holiday spirit. Then again, the show was about love all year long, so it might not matter.

My standard holiday episode pick is always The Office, and these are three gems.

What's better than a love triangle? This episode is a classic.

This honestly might be the best Valentine's Day episode of all time.

Like I said, Valentine's Day matters more when you're in school.

In these episodes, at least, their love life is not dead on arrival.

From some classic Joan to Peggy stealing her secretary's flowers and this genuinely moving Sally Draper moment, Mad Men is bringing it.

Xander makes a love potion and chaos ensues. Buffy is often a serious show, but this episode is pure comedy.

A musical is a perfect way to warm your heart, and these episodes are brimming with tunes.

I so recommend re-visiting Gossip Girl in 2017. It's dated in ways you don't expect, but the sexy melodrama totally holds up.

Another show that's about relationships, yet took multiple seasons to set an hour on February 14. What's that about?

You could easily make a genre Netflix playlist and spend the whole day with sappy monsters and their feels.

OK, it's not the most romantic episode or the best season, but there are some prime Jed and Leo moments — and while you're watching the show, add on a good Charlie and Zoey or Josh and Donna episode.

It's Always Sunny In Philadelphia

A crowded pub run by a family of idiots. That's how we all want to spend our Valentine's Day, right?

Of course Bay has an Anti-Valentine's Day party. She's definitely that girl from high school.

You had me at Mulder, honestly. I don't even need to know what happens.

Another good sitcom to go to for all holidays, New Girl manages to put a fun modern perspective on Valentine's Day with two very different episodes.

So maybe it's a Logan episode that ends in a huge fight. So maybe it's one of the cringier Luke and Lorelai episodes. Still a Valentine's Day episode! Gilmore Girls doesn't play by your rules.

So many options! No matter what your plans are, these will keep you occupied.