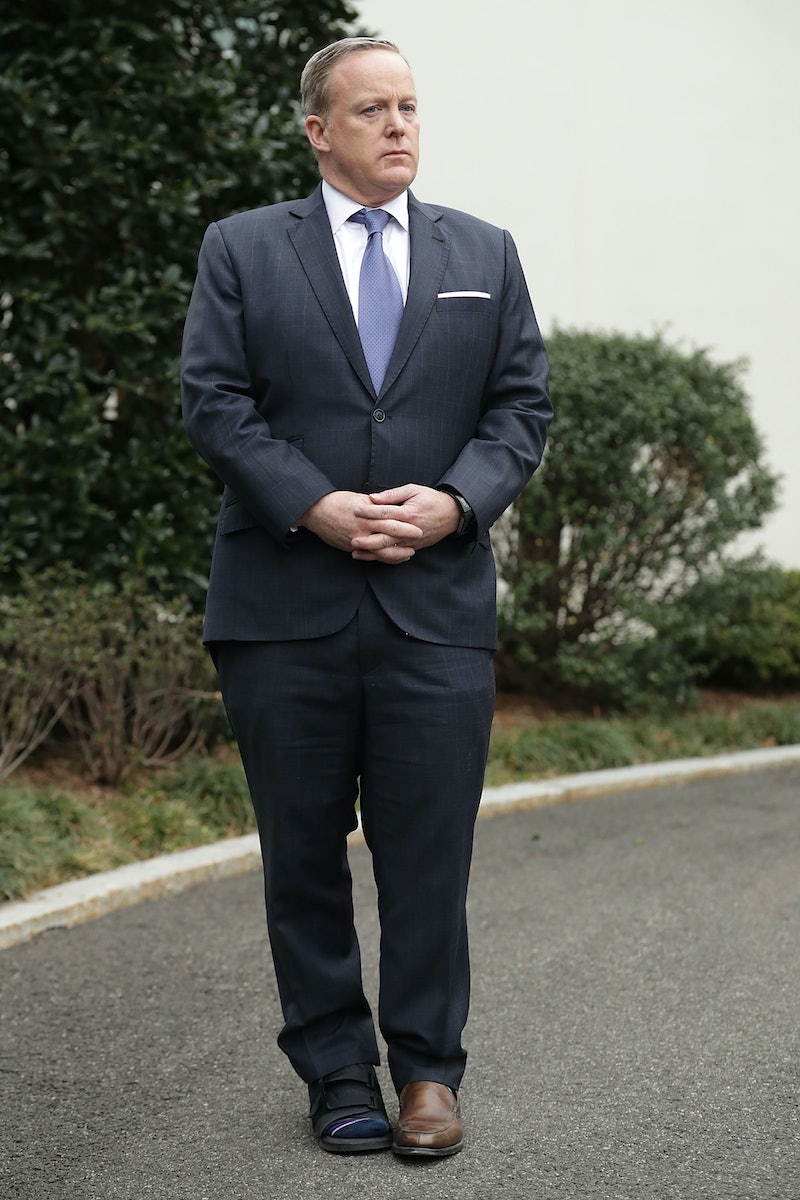 Melissa McCarthy might play a spot-on Sean Spicer on Saturday Night Live, but sometimes there's nothing better than the man himself. According to reporters at the White House on Tuesday night, Spicer hid in the bushes to avoid answering questions about the firing of FBI Director James Comey. That sounds like a joke in and of itself, but Twitter users created so many Sean Spicer in the bushes memes that are pure comedy gold.

From jokes about George W. Bush to well-edited GIFs, the memes and tweets offered insight and possible answers to the many questions people have. Why was Spicer in the bushes? Did he think no one could see him? Is he still there? No, seriously, where the heck is he? Is he officially a Spice Girl now? Is there a photo of him in the bushes? Because that would really, ah, spice up my life.

Seriously, though, Spicer eventually came out of the bushes to answer reporters' questions after stating no one could film him. According to The Washington Post, Spicer insisted the lights on the cameras be turned off, and he then finally answered questions in "near darkness between two tall hedges."

It's funny if you forget that this is the man tasked with communicating information from the White House to the American public. These memes and tweets are way funnier.

I'll Just Be Back Here

I Need This Pic

Just Shrub It Off

Just How He Likes It

Gonna Need More Than That

You Can Find Him Easily Though

Asking For A Friend

It's Not Every Day

Can't Wait For The Next Show

If I Just Stand Still Enough

Keeping Up With Sean Spicer

Hoppin' Down The Bunny Trail

Can You Find Him?

More like this
Twitter Is In Awe Of Taylor Swift’s “Lavender Haze” Music Video
By Jake Viswanath
Twitter Has *A Lot* To Say About The "Single Penalty”
By Sam Ramsden
The Internet Can’t Get Enough Of Viktor & Rolf's Upside Down Dresses
By El Hunt
Twitter Is Roasting Liam Hemsworth Thanks To Miley Cyrus' New Song “Flowers”
By Jake Viswanath
Get Even More From Bustle — Sign Up For The Newsletter
From hair trends to relationship advice, our daily newsletter has everything you need to sound like a person who’s on TikTok, even if you aren’t.