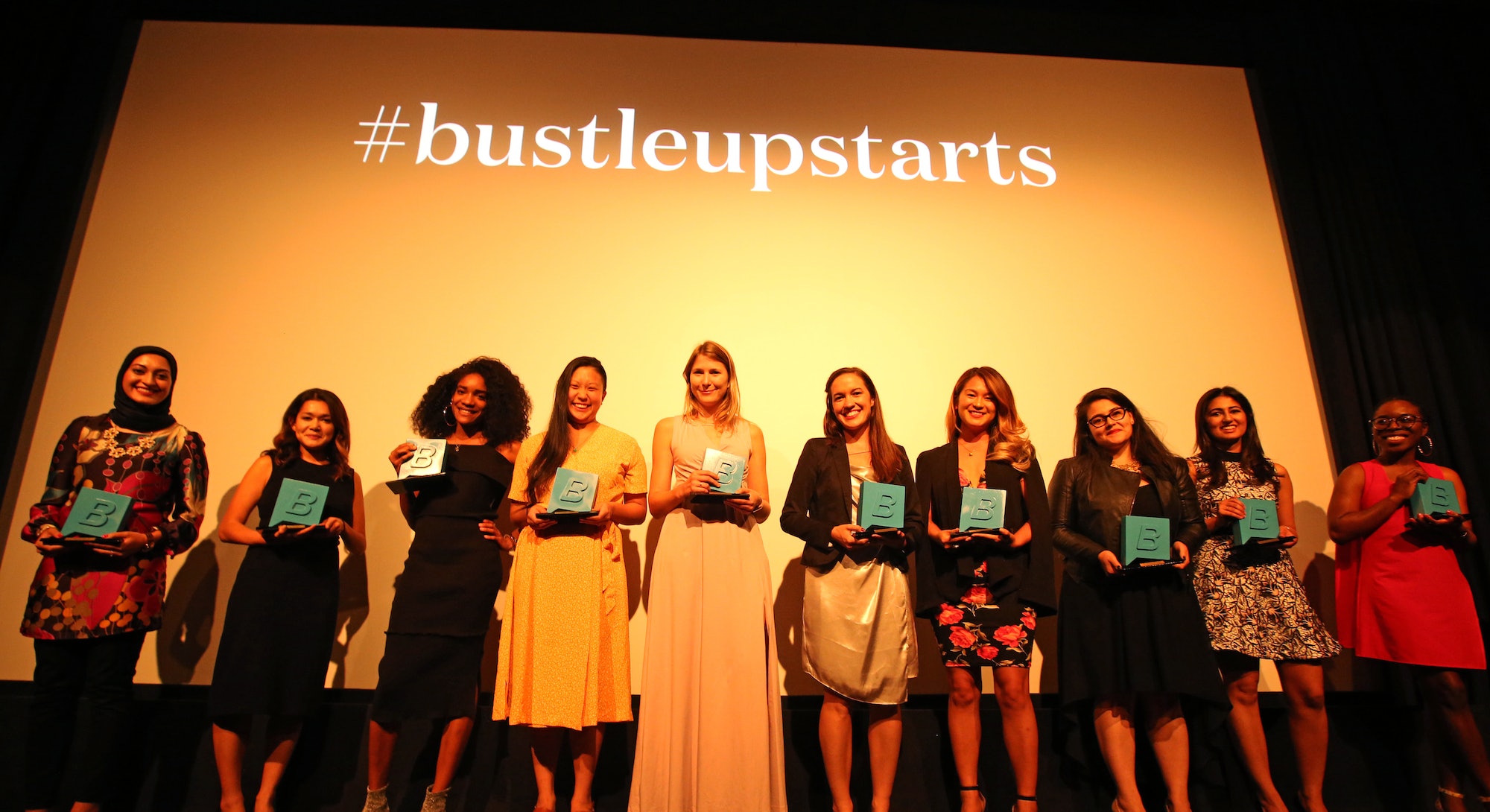 As an employee of Bustle, it’s not uncommon for me to be surrounded by wonderfully smart, driven, and inspiring women. In fact, it happens every day! But on Thursday, Oct. 19, my girl power antenna was raised to another level at Bustle’s third annual Upstart Awards. Spearheaded in partnership with Dice —your go-to resource for discovering opportunities, insights, and connections in technology — the Upstart Awards honored exceptional young women who are doing incredible things in business, STEM (science, technology, engineering, and mathematics), fashion, beauty, the arts, philanthropy, and beyond.

The 10 women Bustle chose to recognize at the event are all making an important impact within their local communities and in the world at large, including Lea Von Bidder, the founder and CEO of Ava Science, Inc., and Sahar Meghani, the founder of ed-tech startup Trunkaroo, a company that designs creative STEM-inspired toys for young children. Bustle and Dice hosted the event at the Crosby Street Hotel in New York city, where the awards ceremony was preceded by a special pre-recorded message from Senator Kirsten Gillibrand, a keynote address from Maja Vujinovic, chief innovation officer of GE, and two panel discussions titled "The Importance of Diversity in STEM" and "How To Turn Your Passion Into An Impactful Business."

While the night as a whole was an inspiring celebration of women making a difference and achieving incredible things, the speakers also acknowledged there is still much work to be done in terms of equal pay and gender equality, especially in the STEM professions.

Here are the four biggest takeaways from the event.

1. It Doesn’t Matter Where You Begin

The first panel, "The Importance of Diversity in STEM," featured an incredible roster of leaders and innovators: Lauren Leader-Chivée, founder and CEO of All in Together; De Angela Duff, co-director and professor of integrated digital media at New York University; Maggie Lu, general manager of digital business and new ventures at Peloton Cycle; and Kristina Yarrington, vice president of marketing at Dice. Interestingly enough, none of these women initially set out to enter STEM fields, but their life paths and career trajectories have helped them land there regardless.

Yarrington actually graduated with a degree in journalism and started off her career as a writer; Leader-Chivée was originally a businesswoman; Lu was a strategy consultant, and Duff actually majored in engineering only to immediately pursue an art degree post-graduation. The takeaway? It’s never too late to change directions, go after your dream, or pursue a career in STEM.

2. Anyone Can Have An Impact

During her keynote address, Vujinovic reflected on how a simple introduction to a random contact helped her find her current mentor, whom she referred to as “one of the most powerful women in the city.” She used this personal experience to highlight how important connections, introductions, and mentors can be for women, especially in male-dominated industries.

Vujinovic asked attendees to be more conscious in their efforts, especially when speaking to others. You might just know of someone in your network who can help a new contact who may be trying to break into a specific industry. Offering an introduction, a resource, or a piece of advice could make all the difference for another woman’s career.

“Have the courage to ask for what you need — but to also give back,” Vujinovic said.

3. Gender Inequality in STEM Exists, But Women Are Still Optimistic About The Future Of The Industry

Panelists discussing the importance of diversity in STEM took a pause to review a survey conducted by Dice and Bustle about the realities and issues impacting women in tech. Yarrington took a moment to go over a few of the statistics compiled in an infographic, including that 82 percent of women believe there is a wage gap, and 60 percent of women believe they are treated differently from their male coworkers.

“Women are dealing with fewer promotions and fewer raises — and then when they are getting a raise, they’re getting a smaller amount,” Yarrington said.

Despite the disheartening numbers, the survey found a light at the end of the tunnel: 90 percent of women and men would recommend and encourage a career in tech to young women.

“I think coming together as women, like we are today, is so important,” Yarrington said in her final remarks to the panel. “It’s about bringing that community, and getting that support around us, to really make [change] happen, together.”

4. Surround Yourself With The Right People

While the panelists chosen to speak during the "How To Turn Your Passion Into An Impactful Business" discussion have certainly made powerful strides on their own, they also took the time to acknowledge the supportive women and communities that have helped them get to where they are today.

“I think competition is inevitable, it’s just human nature,” said Heather Barmore, director of digital strategy and content at Planned Parenthood Affiliates of California. “I’ve been really, really, really blessed to be part of groups of women who are all good at empowering one another and amplifying one another’s messages.”

Barmore encouraged attendees to "find the people who will lift you up," and to avoid getting lost in a game of comparison.

“Find your tribe — that sounds so hokey and cheesy," she said. "But you have to find your tribe, while at the same time realizing that everyone is on a different path.”

The night concluded with a networking happy hour featuring cocktails, which gave honorees, panelists, and attendees alike the opportunity to take Barmore's advice and grow their tribes.

This article is sponsored by Dice.