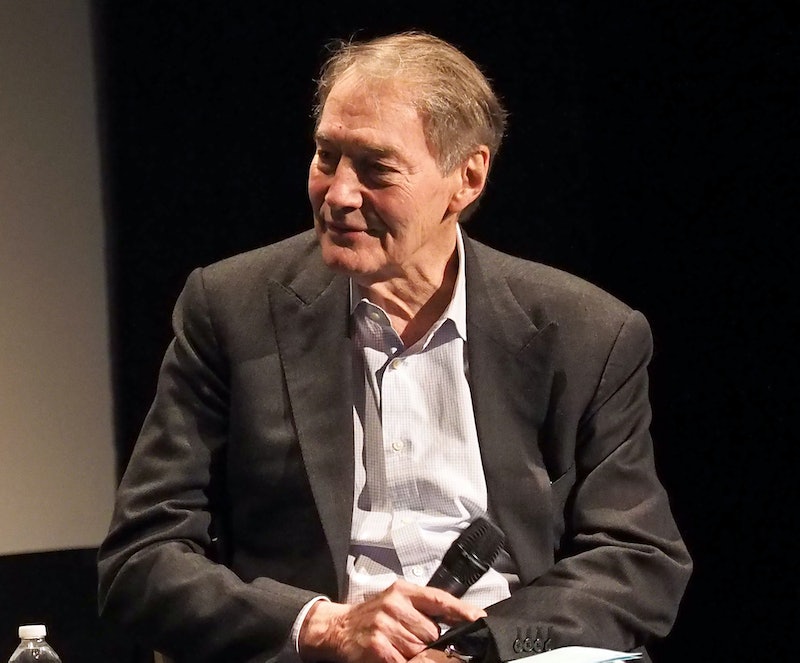 After an initial round of sexual misconduct allegations from women who worked with Charlie Rose resulted in him being fired by multiple networks, another woman alleged Rose made her watch a sex scene from a movie while she was working as an intern on his PBS show. The former TV host has yet to respond to this latest allegation, which came from one of four additional women now claiming Rose harassed them while they worked for him.

Sarah Gordon told NBC News that the incident occurred in 2002, when she was a 21-year-old intern on Charlie Rose. She said she had delivered mail to Rose's apartment when he asked her to stay and proceeded to turn on Secretary, which she described as a "sexually involved film which involves S&M, unfortunately."

Gordon said that Rose asked her if the film made her feel aroused. (It is worth pointing out that Secretary portrays a woman who becomes sexually involved with her older boss.) Gordon also said Rose did not make any attempt to physically touch her.

"I don't think someone like that deserves to have a position like that if they're going to abuse their power anyway, so I think it's probably best, for the best," Gordon told NBC News. She also expressed empathy for Rose, saying she thinks he is "troubled" and that "we all have issues in life."

The Washington Post previously published allegations from eight women who claimed Rose had sexually harassed them during their employment with Charlie Rose. While Rose himself offered a kind of apology, he also issued a statement saying in part, "I do not believe all of these allegations are accurate. I always felt that I was pursuing shared feelings, even though I now realize I was mistaken." PBS fired Rose within hours of the Post article's publication, and CBS suspended Rose in order to conduct its own investigation.

That internal probe uncovered three CBS employees who also allege Rose sexually harassed them, two of whom provided details for the report. The third woman said she had experienced harassment, but wished to keep the specifics to herself. CBS News president David Rhodes announced Wednesday that Rose had been fired from the network, saying the allegations against him described "extremely disturbing and intolerable behavior."

Rose joined CBS in 2012 as a co-host on CBS This Morning. His presence is largely credited with much-improved ratings for the network during the morning show bloc. Rose was also a 60 Minutes II correspondent from 1998 until the show's cancellation in 2008, after which he joined the 60 Minutes team.

Rose's CBS This Morning co-hosts, Norah O'Donnell and Gayle King, spent Tuesday morning responding to the allegations against their former coworker. "Oprah called me and said, 'Are you OK?' I am not OK," King said. She went on to ask, "[W]hat do you say when someone that you deeply care about has done something that is so horrible? How do you wrap your brain around that? I'm really grappling with that."

But King unequivocally sided with the women coming forward, saying:

That said, Charlie does not get a pass here. He doesn't get a pass from anyone in this room. We are all deeply affected, we are all rocked by this. I really applaud the women that speak up, despite the friendship.

The women's allegations against Rose date back to the 1990s, when Rose turned nascent acclaim for his self-titled show into one of the most powerful programs in journalism. One of the unnamed women in the Post report said that Rose had her work from his house while she was an intern on his PBS show. She recalled Rose got into the shower, left the door open, and proceeded to call her name several times. When she didn't respond, she said that Rose came out and stood over her, unclothed. Rose also faces several allegations of unwanted groping from six separate women.

In his response, Rose said he was "greatly embarrassed" by the allegations, and considers himself "an advocate for the careers of the women" he's worked with. "It is essential that these women know I hear them and that I deeply apologize for my inappropriate behavior," Rose said.

But Rose's defiant attitude in an on-camera run-in with a TMZ reporter on Monday conflicts with that statement. When asked by TMZ whether he had anything to say about the people "accusing you of all these wrongdoings," Rose responded, "It's not wrongdoings."

With the eight women who talked to the Post leveling sexual misconduct allegations against Rose, another three women at CBS alleging similar misconduct, and Gordon's account of Rose allegedly asking her to watch a sexually explicit film, there are now 12 women accusing Rose of harassment.