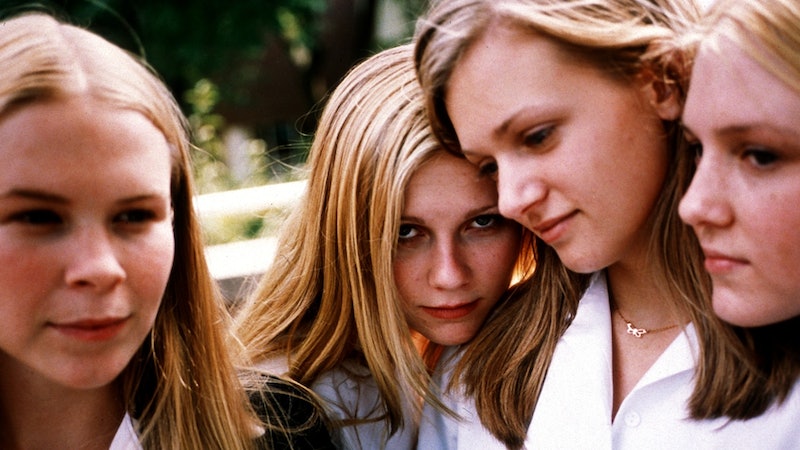 I'm not the most adventurous with my hair. For the first 20 years of my life, it was long, straight, and brown. Now that I'm 21, it's a long bob, slightly less straight — I finally broke up with the blowdryer — and still brown. I haven't changed it much. But that's not to say I haven't thought about it — and nothing has made me want to do something drastic more than the big screen. Here are five times I've almost been lured in by the power of cinema and the pull of envy.

I didn't want to include this film because it shows up on every single "best movie haircuts" or "most stylish movie haircuts" list, and I hate conformity. As you can see, though, I caved — but I feel okay doing it for Vidal Sassoon and Mia Farrow. And boy, can Mia rock a pixie cut. In the film, the pixie is an attempt at control when Rosemary begins to realize she has none. And this is the pixie cut.

Every time I watch this movie I spend a solid 15 minutes pressing my fingers to my cheeks to see if the bones are finally prominent enough to get a pixie cut (so far, no go). When that does't work, I duck face in the mirror for another fifteen, hollowing out my cheeks — which would totally work if I never opened my mouth again.

I am down with my Jewish heritage: I always bring a sweater to the movies, I love me a bagel with schmear, I get Jerry Seinfeld, and if I hear of anyone, anywhere getting sick, I'm pretty sure I'm coming down with it. And I never really longed to be blonde… that is, until i saw Sophia Coppola's adaptation of one of my favorite novels.

The sisters Lisbon have the kind of hair that requires baby shampoo and no other products, the kind of hair that looks good when it's raining. So, they have a masochistic zealot for a mother. And sure, you could say that they aren't so happy because of the whole self-inflicted death thing. You could say those things to me. People have. Nonsense, I will respond. They might be miserable, but look at that hair.

It's well known that Natalie Portman's tears in that dramatic head-shaving scene were real. Without those touch-me-please bouncy curls, Natalie goes from young woman to prissier to badass ally. I'd imagine that Evey became such a badass because she finally had the time to devote herself to some higher and complex thinking, free from the constraints of de-tangler.

Sometimes I want to shave my head, liberating myself from western standards of femininity — lots of long hair, only on the head — and really devote myself to a cause. For now, though, I'll keep sporadically skipping waxes and re-posting Planned Parenthood's status updates on my Facebook wall.

Colored hair is everywhere now, and with ubiquity comes dilution. It's not so punk anymore (Hey, Katy Perry) but back in 2004 Kate Winslet's portrayal of Clementine as a free spirit in its most paradigmatic sense, was pretty damn rebellious.

This story has been updated from its original version.

More like this
Iris Law's Skunk Mullet Is Not For The Faint-Hearted
By Tomi Otekunrin
14 Hair Color Trends You’re Going To See Everywhere This Summer
By Danielle Sinay
2022's Top Wedding Hair & Makeup Looks, According To Pinterest
By Olivia Rose Ferreiro
8 Chic Ways To Style A Pixie Haircut With Bangs
By Paris Giles
Get Even More From Bustle — Sign Up For The Newsletter