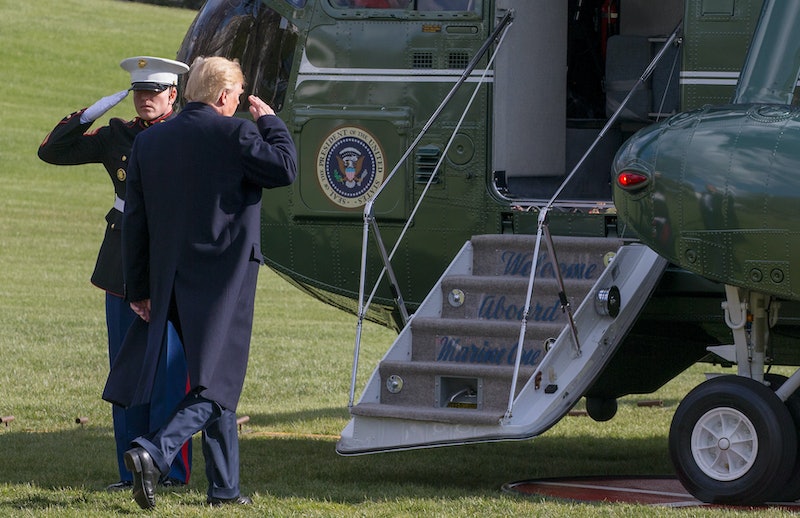 According to a government report released Tuesday, President Trump's trips to Mar-a-Lago cost taxpayers $13.6 million over the course of just one month in 2017. Around $60,000 of this money was paid directly to Mar-a-Lago, meaning it went to the Trump Organization's coffers. Bustle has reached out to the White House for comment.

According to the GAO report, the government spent $10.6 million on operational costs for aircraft and boats during Trump's four trips to Mar-a-Lago. An additional $3 million went to costs associated with the government employees who accompanied Trump on the trips, including transportation and lodging (but excluding salaries and benefits, which those employees would have received regardless of whether they'd gone to Mar-a-Lago), the report noted.

In its report, the GAO also found that the Secret Service and Department of Defense have not been submitting regular expense reports to Congress, something that is required of them under the Presidential Protection Assistance Act.

"Secret Service officials last submitted reports in fiscal year 2015 and were unaware that reports had not been submitted in fiscal years 2016 and 2017 until GAO requested this information," the GAO report says. "GAO also found that the Department of Defense (DOD) has a policy but did not produce and submit the reports as required."

According to Talking Points Memo, Trump has spent a total of 84 days, or roughly 11 percent of his presidency, at Mar-a-Lago. Trump's conduct on some of those visits has drawn criticism; during one of the trips that the GAO looked at, the president held a national security meeting with Japanese Prime Minister Shinzo Abe at a Mar-a-Lago restaurant in full view of the resorts guests, CNN reported at the time.

That meeting also caught the eye of the GAO, a nonpartisan government watchdog that acts as Congress' investigative wing. Bloomberg reported in November that the GAO, separate from its report on travel costs, has completed a separate analysis of the Trump-Abe meeting and the security concerns it raised. The release of that report, which according to Bloomberg is titled "Presidential Security: Vetting of Individuals and Secure Areas at Mar-a-Lago," was temporarily blocked after the Departments of Homeland Security and Defense said that it contained sensitive information. However, GAO spokesman Chuck Young told Bloomberg in November that a public version will be released "in the next few months."

In the report released Tuesday, the GAO also looked at the cost of several international trips by Trump's two eldest sons, Donald Trump Jr. and Eric Trump. The GAO found that Eric's trips to Uruguay and the Dominican Republican in January 2017, combined with Don Jr.'s trip to the United Arab Emirates in February the same year, cost taxpayers a total of $396,000.

The GAO report was requested by Sens. Dianne Feinstein and Gary Peters and Rep. Elijah Cummings, who responded to the report in a joint statement Thursday.

“This alarming report captures a snapshot of the tens of millions of dollars President Trump spends to travel to his Palm Beach resort ― all at taxpayer expense ― including government funds that are paid directly to a business in which the president himself has a financial interest,” the three Democratic lawmakers said. "This is part of a troubling pattern of wasteful spending and serious abuse of tax dollars by the administration. We will keep investigating this issue to ensure taxpayer dollars are being used effectively and appropriately.”