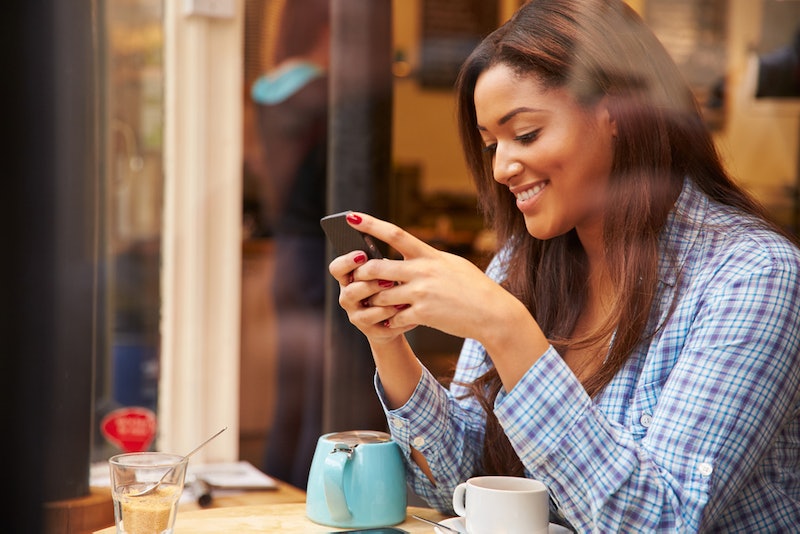 When it comes to certain things — OK, maybe everything — we all benefit when women are in charge. And in our opinion, the same thing applies to dating in the digital age. That's why our ears perked up when we got wind of Pickable, the new app that's redefining what it means for women to be in control of their dating lives.

And trust us, we, too, have heard it ALL before. We've tried the websites that promise to deliver more compatible dates than a matchmaker, we've downloaded the apps that pair you based on your most obscure interests, but mostly, we've wasted time going back and forth with matches that we have no chance of actually meeting IRL.

But then we met Pickable, which checks the two most important boxes when it comes to online dating: It's like no app experience we've had before (and we've had 'em all), AND it gives off major girl power vibes.

Yes and yes, thank you!

Here are 4 things you need to know about Pickable.

1. It's built on anonymity.

One of the most unique aspects of Pickable is that it's a totally anonymous experience for women, right up until they come across a guy they want to connect with. Unlike other apps, female users don't have to worry about less-than-ideal people (i.e. coworkers, exes, the list goes on) coming across their profiles.

Women start by downloading the app and browsing anonymously. That's right — they don't have to include a photo, bio, or even their name. Men, on the other hand, create a simple profile with their name and photo, as well as an optional bio.

When a woman sees someone she wants to strike up a convo with, all she has to do is shoot him a photo, which he can either accept and start chatting, or skip and move along.

How easy is that?

Dating apps are a lot of things. One thing they shouldn't be is time-consuming.

Pickable provides an alternative to browsing profiles 'til you're blue in the face, and it helps you avoid the dreaded 'pen pal' situation where you and your matches talk forever, but never actually meet up in reality.

Women may have anonymity on Pickable, but men also luck out: All they have to do is chill out and wait until they're notified that someone wants to chat, and from there (if they're interested) they can engage, and then take the conversation where it should be — offline, ASAP.

No more sending messages out into the void and getting shot down, or worse, not getting a response at all.

3. It cuts out the stuff that doesn't matter.

With some apps, you're practically encouraged to build out elaborate profiles with oh-so-clever bios and the *perfect* pictures that show you from all the right angles.

But how much does that stuff actually matter in the long run?

Not much, according to Pickable. With their minimalist profiles for men, and no profiles for women, they're cutting out all the fluff that usually just ends up complicating things, and getting straight to what's most important: Meeting up in real life to see if you're actually compatible.

4. It evens the playing field.

Even though the Pickable experience differs for men and women, a couple crucial things remain the same: Neither can send unsolicited messages, and once a woman's chat request is accepted by a man, EITHER can send the first message.

This gives both parties the ability to come up with a fun opening line, and makes unsolicited messages from people you're not interested in a thing of the past.

Want to try out Pickable and see for yourself what all the hype is about? All you have to do is download the app for free (!); it's available on both iOS and Android. And in the meantime, click here to learn more about how Pickable works to make real connections in the easiest, most fuss-free way possible.