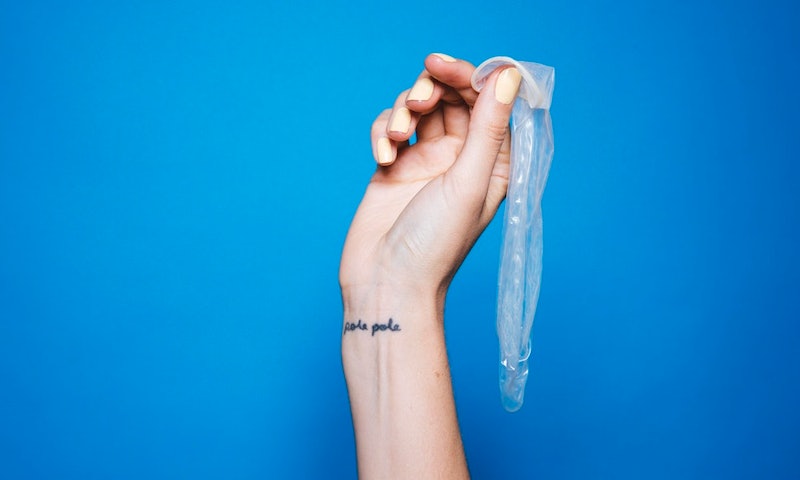 Despite the fact that condoms are the most efficient way to protect yourself against both pregnancy and STIs, we often don't actually take the time to learn to use them correctly. But it's crucial to learn how to use condoms correctly.

"Unless a parent/guardian, teacher, or health care worker intentionally spent time going through the steps with us (or if we’ve sought out help on our own), we’ve sort of been left to our own devices to figure [condoms] out on our own, often learning from the mistakes we’ve already made," sex educator Anne Hodder, ACS, tells Bustle. And part of using them correctly is using them all the time — including during your period, when you can still get pregnant.

And all of this gets more complicated if you have a latex allergy, as most condoms are made of latex. Less than one percent of people in the U.S. suffer from a latex allergy — but that still adds up to three million people around the country. Not only that, in certain groups — like health care workers — that number can be much higher, because latex allergies are increased in those with repeated exposure to latex items, like gloves. And if you do suffer from a latex allergy, then using a traditional condom may just not be an option. Luckily, there's been a lot of progress and there are so many great non-latex condoms out there to try that protect against pregnancy, and in some cases, STIs. Here are five great options if you're allergic to latex.