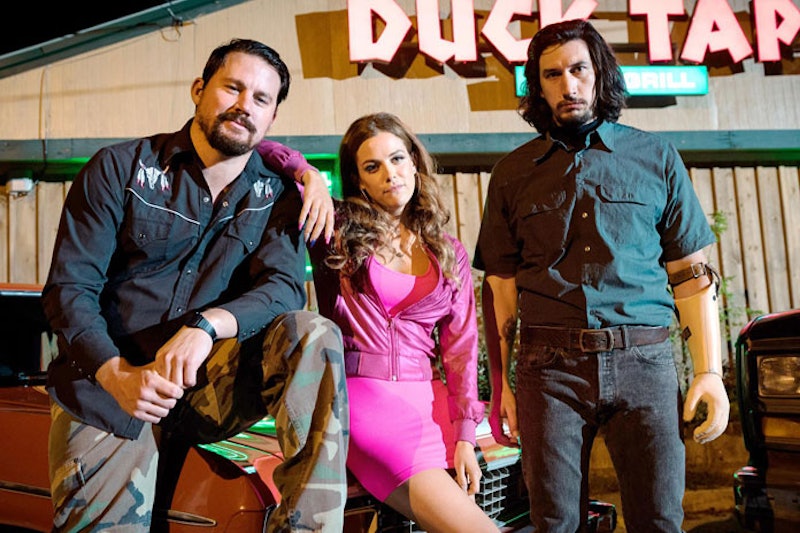 We all meet people during our lifetimes who are unique and special in their own ways. But if you grew up in a place that can definitely be classified as rural, there are probably certain types of guys you met. Many of these guys had farmer's licenses before they had regular licenses.

If that sounds familiar, you're likely to recognize a few of these characters in the upcoming film Logan Lucky, directed by Steven Soderbergh (Ocean’s 11, 12, 13 and Magic Mike). The film follows three siblings Jimmy, Clyde, and Mellie — a family from the hollers of West Virginia — who try to pull off a heist during a NASCAR race in order to reverse a family curse. And whether we're following the hustling and wisecracking Jimmy or the slightly eccentric Clyde, the film showcases a series of these recognizable dudes.

You know 'em like those backcountry roads you ride all the time. Maybe it's the guy who turned his high school obsession with dirt bikes into a lifelong career. Perhaps you had a next-door neighbor that was always working on his car when he wasn't causing trouble on the weekend. Having grown up in the country myself, I can say that you also probably have a genuine affection for all of them.

1. The Guy Who Isn't Afraid To Get His Hands Dirty

Where they drink: Any dimly-lit dive bar conveniently located near the auto body, and of course the drink of choice is a tall boy.

Instagram feed consists of: Various car shows that they frequent on the weekends; pictures of their cat who happens to be named after a country music legend; selfies with witty captions that make you wonder, "Am I attracted to this person?"

Uniform: Baggier jeans that are immune to the trends, plus a regular-old t-shirt, topped off with a cap. A boiler suit if they're on the clock.

Opening line on a dating app: "Sup?" They get straight to the point.

Where they drink: Hanging out of the bed of a pickup truck in a convenience store parking lot; in a tractor.

Instagram feed consists of: Mostly scenic shots of the woods at the crack of dawn, 'cause the country is freakin' beautiful.

Opening line on a dating app: "Hey. Did you catch the sunset last night?" This one is a secret romantic.

Where they drink: Somewhere dangerous and mysterious... like under some bleachers, or near a train track.

Instagram feed consists of: Pictures of himself on his bike or shots of himself adding a new tattoo to his already inked-up body. Boy's as bad as they come.

Uniform: A worn-in pair of jeans, soft-as-a-lamb's-ear cotton tee, and some steel-toed boots.

Opening line on a dating app: "You look like trouble."

Where they drink: Literally anywhere at any time.

Instagram feed consists of: Plentiful beer funneling / chugging videos that end in someone gagging or screaming "HELL YEAH," and country music concerts with visible hands in the crowd holding lighters. Also, the obligatory pictures with parents.

Opening line on a dating app: "Hey darling, how was your weekend?" Sweet, simple, and succinct.

Where they drink: You can find them sipping a chilled bourbon or a mint juleps on a patio. This guy likes to be a little more ~cosmopolitan.~

Uniform: A button-down (obvi) with cuffed, slim khakis, tan boat shoes and some kind of sock with personality.

Opening line on a dating app: "Anyone ever tell you you're beautiful? *Insert winky face.*" Responds quickly after with "I'm Dean, by the way." Always the charmer.

This article is sponsored by Logan Lucky, in theaters everywhere August 18.