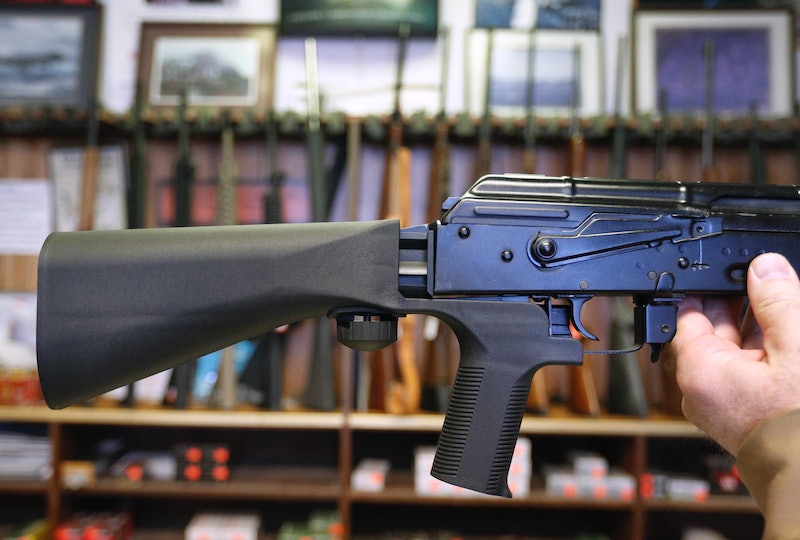 Inside America's longtime debate about how best to address gun violence, there's one proposal that wouldn't restrict the guns that adults can legally buy: a national gun registry. The pros and cons of a national gun registry mirror most of the arguments you typically hear from hardcore defenders of the Second Amendment and vocal gun control activists alike. At the end of the day, the debate comes down to whether or not the government should be tracking who owns what firearms.

The concept of a national gun registry is simple: Everyone who owns a firearm is required to register it, so that the government has a definitive list of everyone who (legally) owns a weapon. Federal law prohibits the existing National Instant Criminal Background Check System (NICS) from creating "any system for the registration of firearms, firearm owners, or firearm transactions or dispositions, except with respect to persons prohibited from receiving a firearm." Six states and Washington, D.C. do require the registration of certain firearms, however. Hawaii and D.C. are the only places in the U.S. that mandate all guns be registered.

The following pros and cons outline just why advocates for a national gun registry want to see the United States put a comprehensive database in place — and why opponents argue that kind of a registry wouldn't actually help curb gun violence.

A national firearm registry would allow law enforcement to "trace" guns found at crime scenes. Because the government would have a full list of who owns each gun that's been properly registered, police officers would have more tools to quickly find who owns guns connected to violent crimes.

Comprehensive registration laws would require a firearm to be re-registered whenever the gun's title is transferred to another person, as well as require gun owners to report when their weapon is lost or stolen, as the Giffords Law Center to Prevent Gun Violence notes. In theory, these rules would prevent police officers from incorrectly identifying the gun owner.

The National Rifle Association, on the other hand, argues that gun registration wouldn't prevent or solve crimes because any guns that were stolen or sold on the black market wouldn't be in the database. "Criminals wouldn’t register guns," the NRA Institute for Legislative Action's website reads.

A 2016 study from the University of Pittsburgh appears to support the NRA's claim, finding that less than a fifth of all gun crimes committed in Pittsburgh in 2008 were carried out by people who legally owned a gun. More than 30 percent of guns used in those crimes were stolen — although 40 percent of those weren't reported stolen, as a national gun registry would require.

Under federal law, you're prohibited from owning a gun if you've been: convicted of a crime punishable by more than one year in prison; convicted of domestic violence; subject to a restraining order for harassing, stalking, or threatening an intimate partner; committed to a mental institution; addicted to a controlled substance; or dishonorably discharged from the military.

Many people who fall into one of the above categories still own guns, however. The issue typically comes up in relation to domestic abuse, as many of the men who committed high-profile mass shootings in the past year previously had been accused of domestic violence. Advocates for a national gun registry argue that registering every gun would allow law enforcement to remove firearms from those people who legally aren't supposed to have them.

CON: What's Stopping The Government From Disarming Everyone, Then

Opponents of a national gun registry counter that taking guns away from criminals could potentially lead to firearms being taken from legal gun owners, too. In 2015, a New York Times and CBS News poll found that 52 percent of Republicans thought it was at least "somewhat likely" that "stricter gun laws will eventually lead to the federal government trying to take away guns from Americans who legally own them."

Requiring that all firearms be registered with the government would cut back on illegal gun sales, gun registry advocates argue, because it would be riskier for gun owners to sell weapons to potentially dangerous people.

Say you had a gun that was registered with the government, and you sold it to another person without re-registering the gun in that person's name. If that gun was ever recovered at a crime scene, police would trace it back to you. The fear of being held responsible for what someone else might do with the gun could stop gun owners from selling a weapon to someone who is legally prevented from having one.

Since a national gun registry is currently prohibited by law, it would take a lot of political maneuvering for gun control advocates to pressure Congress to pass one any time soon. Still, it's helpful to know where people on both sides of the issue stand as the gun control debate wages on.