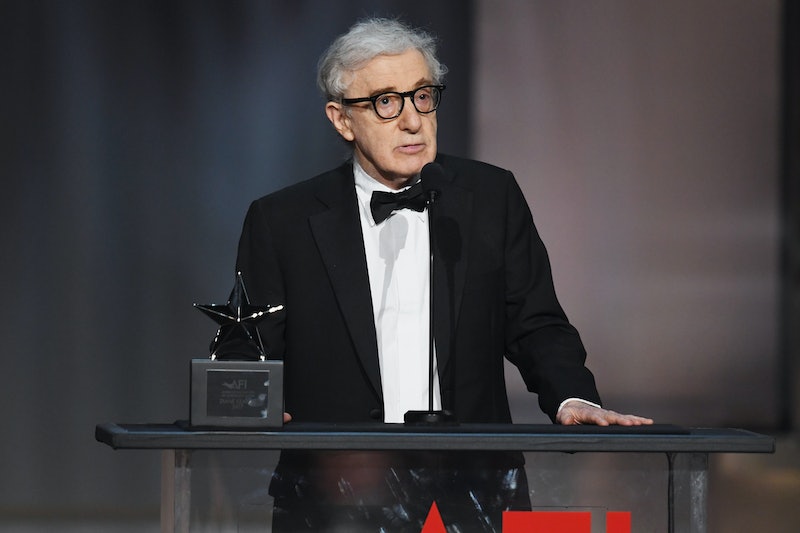 After the New York Times released a bombshell report on Oct. 5, exposing decades of alleged sexual assault and abuse at the hands of disgraced film mogul Harvey Weinstein, the landscape in Hollywood and beyond began to crumble. The watershed #MeToo movement led to more sexual abuse survivors coming forward about sexual misconduct committed by powerful men in entertainment and politics, among other industries — including alleged misconduct by men as well-established as Louis C.K., Roy Moore, Kevin Spacey, and more.

Here's an important thing to remember: Survivors were speaking out against sexual harassment long before the Weinstein allegations came to light. In some cases, like the ones you'll see below, these men continue to work in their respective industries despite repeated sexual assault allegations and convictions being lodged against them. Some of them still are.

Here are some of those powerful men, whose troubling history of sexual assault allegations have been ignored for far too long. In some cases, they are still being ignored.

Allen was accused in 1992 of sexually abusing his 7-year-old adopted daughter Dylan Farrow, which Allen has always denied. Mia Farrow, Dylan's mother and Allen's partner at the time, took Dylan to a pediatrician, who reported the alleged sexual abuse to authorities due to a legal requirement. An investigation was launched, and Connecticut's state attorney said publicly that he believed he had enough evidence to charge Allen, but wanted to spare Dylan the trauma of going through a trial.

Dylan later penned an essay in 2014 in the New York Times, detailing the alleged sexual abuse. Allen responded in his own New York Times essay, denying the allegations: "I naïvely thought the accusation would be dismissed out of hand because of course, I hadn’t molested Dylan and any rational person would see the ploy for what it was," he wrote.

Allen has continued to work in Hollywood, both before and after the Weinstein scandal broke headlines. Allen's film Wonder Wheel, debuted at the New York Film Festival this year, and actresses including Kate Winslet, Blake Lively, and Kristen Stewart have worked with him in recent years. Ronan Farrow, Woody Allen's son, helped break the Weinstein story in a New Yorker piece and has continued to speak out against his father in the press.

Polanski, a film producer and actor, pleaded guilty to the statutory rape of then-13-year-old Samantha Geimer in 1979, but fled the United States before he was sentenced. Polanski now lives in France, where, at 84, he continues to make movies and win awards for his films.

In 2002, Polanski won an Oscar for Best Director for the film The Pianist. Since fleeing the country, three other accusers have come forward claiming that Polanski allegedly sexually assaulted them when they were children, including one in October who said she came forward because she was inspired by the survivors of Harvey Weinstein's case. (Polanski has not commented publicly on the allegations.)

Renate Langer, a former German actress, reported to the Swiss police that Polanski raped her at a house in Gstaad in 1972 when she was 15 years old, according to the New York Times. A lawyer for Polanski declined to comment on Langer's accusation.

President Bill Clinton has been accused by four women of sexual assault and rape — all accounts he adamantly denies. Juanita Broaddrick, a nursing home administrator, alleges that Clinton raped her in a hotel room in 1978. After Clinton's impeachment trial in 1999, Broaddrick recounted her allegations in a Dateline NBC interview. In the interview, she described the alleged rape:

I kept telling him no. I don’t want this at all. You must have had the wrong idea. And he wouldn’t list… and he grabbed me again very forcefully and started biting on my top lip. And this was extremely painful. I thought he was going to bite my lip off. And that’s when he pushed me back on the bed.

Clinton denied the allegations and no charges were brought against him.

Former White House volunteer Kathleen Willey alleged that Clinton had groped her in the Oval Office in 1993. Another woman named Paula Jones said that Clinton and exposed himself to her three years prior. Clinton denied the claims under oath, but agreed to a legal settlement of $850,000.

Allegations against Cosby date all the way back to the 1960s, but it wasn't until comedian Hannibal Buress referred to Cosby as a rapist during a set in October 2014 that the sexual assault allegations reached national attention and more and more victims began coming forward. Cosby's accusers, including model Janice Dickinson, have claimed that Cosby used drugs to facilitate sexual assault and rape. Cosby's team responded to the claims, calling them "unsubstantiated, fantastical stories that have escalated past the point of absurdity."

Cosby was charged with aggravated indecent assault in December 2015, based on the allegations by Andrea Constand, who claimed that Cosby drugged and sexually assaulted her in 2004. Cosby's trial began in June 2017 and ended in a mistrial; a new trial is scheduled to begin in April 2018.

When Associate Justice Clarence Thomas was nominated to the Supreme Court by President George H. W. Bush in 1991, law school professor Anita Hill famously testified that Thomas was unsuitable for confirmation because he had allegedly sexually harassed her when he was her boss in the 1980s, which he denied.

Hill, who worked as Thomas' assistant when he served on the Equal Employment Opportunity Commission, testified in the televised congressional hearings that Clarence had made inappropriate comments toward her that would constitute as workplace sexual harassment. Her credibility was subsequently attacked and Clarence was confirmed by the Senate.

Clarence denied the allegations and famously compared the sexual harassment allegations to a "high-tech lynching." He said:

This is not an opportunity to talk about difficult matters privately or in a closed environment. This is a circus. It's a national disgrace. And from my standpoint, as a black American, it is a high-tech lynching for uppity blacks who in any way deign to think for themselves, to do for themselves, to have different ideas, and it is a message that unless you kowtow to an old order, this is what will happen to you. You will be lynched, destroyed, caricatured by a committee of the U.S. Senate rather than hung from a tree.

Although the fallout from the Weinstein scandal has led to more survivors of sexual assault coming forward, it's important to note that women have not always been believed or taken seriously.

More like this
Why You're Seeing Green Bandanas At Abortion Rights Protests
By Lexi Inks
The Most Powerful Photos From The Weekend’s Abortion Rights Protests
By Melanie Mignucci
Kimberly J. Brown & Daniel Kountz Looked Back On Their ‘Halloweentown’ Romance
By Stephanie Topacio Long
All The Sneaky Lindsay Lohan Movie Easter Eggs In Her New Ad, Explained
By Stephanie Topacio Long
Get Even More From Bustle — Sign Up For The Newsletter