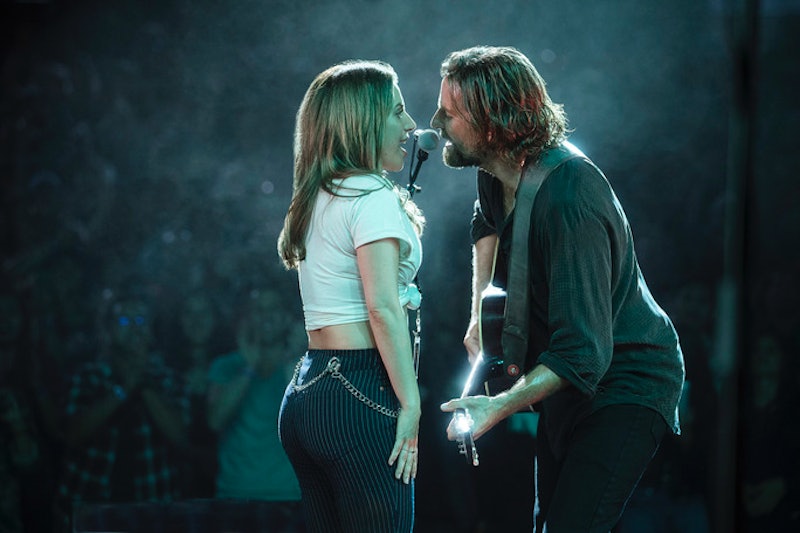 There are a million reasons to be excited about the release of A Star Is Born. For one, the juggernaut performance of Lady Gaga. Secondly, the masterful directing of Bradley Cooper. Not to mention, the soundtrack is full of rock ballads that will definitely be stuck in your head for weeks. On top of all that, the love story between struggling artists Ally and Jack is one that will soften even the hardest of hearts.

And while the tale might come across as one about the capricious and intoxicating nature of fame — with all its gifts, amazing and terrible — it's a love story at its core. Plagued by alcoholism, the seasoned musician Jackson Maine (Cooper) is in trouble if he doesn't find the will to turn things around. One night, he stumbles into a bar and is struck by the talent, charm, and voice of singer Ally (Lady Gaga). He takes her on as a protégé, and as they make music together, their bond grows into a romance. But love is never simple, especially when the Hollywood star-making machine is in the mix.

To prepare ourselves mentally, emotionally, physically, and sonically for the release of A Star Is Born, we've teamed up with Warner Bros. Pictures to run through all the reasons that Jack and Ally's love story is one for the romance film canon. Enjoy and make sure to catch the premiere of A Star Is Born, in theaters everywhere October 5th!

1. They Have The Best Meet-Cute Ever

As all great romances should begin, the ballad of Jack and Ally begins in a dive bar on drag karaoke night. Jack stumbles in, mid-bender, when he sees Ally on stage crooning "La Vie En Rose." Time stops, their hearts stop, and all of it happens in a haven of camp, gender-bending, and creative exploration. Suffice it to say, this is the meet-cute that we not only want but need in 2018.

2. They Encourage Each Other To Challenge The Industry

Despite her very demonstrative talents, Ally has been told over and over again by music industry folks that she won't make it. Why? Because people have told her her nose is too big. (Ugh). First reassuring her that she's beautiful, he then sees her remarkable potential as a songwriter and encourages her to go for it. The surprisingly sexy moment where he amorously strokes her nose doesn't hurt.

The life on the road. The gravelly-voiced belting. The hours in the studio spent crafting each verse. Jack and Ally's unfussy, tough-yet-tender dynamic will bring you inside the lifestyle of some roving troubadours and make you fall head over heels.

Just like in the classic, original version of the story, we see Ally's star on the rise as Jackson struggles. And sure, she goes through the glossy marketing machine. And sure, Jack lashes out in a very unbecoming way—but not out of jealousy this time; rather, he thinks she’s better than the work she’s doing. But the film doesn't shame Ally for pursuing her ambition. And while the old ways might lend to the authenticity of the story, the new ways and the new era of Ally represents the culture and tastes of tomorrow.

Part of the reason that this movie has been so buzzed-about are the considerable combined star quality of the two lead actors. In spite of her real-life star status, Lady Gaga is able to serve a true "woman gingerly finding her talent" energy delicately and with many layers. Cooper plays off her with a grizzled charm, concealing a helplessness to his disease that contradicts his macho image. Also, their musical chemistry is off the charts. I mean, come on.