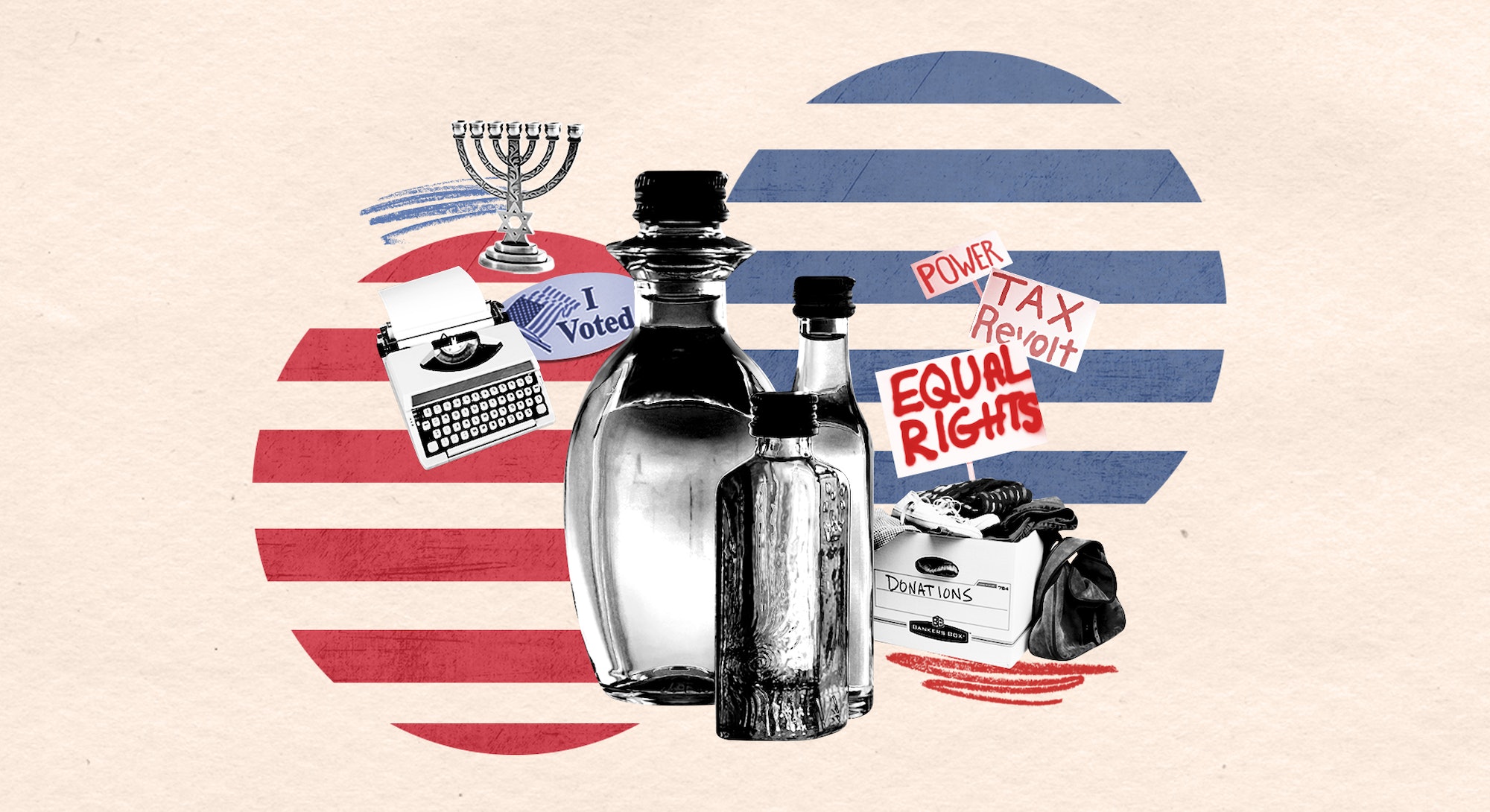 Americans are stressed. Not all of them, but most of them. A November 2019 study by the American Psychological Association found that 60% of Gen Z and millennials want to stay informed about the news, but following it causes stress and anxiety. On top of that, more than half are uneasy about the upcoming presidential race. And who can blame them? American voters find themselves staring into an electoral abyss, with only an exhausting and polarizing political debate on the other side.

"I see people feeling paralyzed and wondering, 'What’s the point of anything?'" says Leisha Borja, MFT, a marriage and family therapist based in Valencia, California. "There’s a lot of hopelessness and helplessness."

Self care is an oft-cited solution for such ills, and while the cliche methods — massages, Netflix, and takeout — can be beneficial, realistically, a bath bomb can only take you so far. For some, finding a self-care strategy that speaks to their values is the solution. Yes, this might mean stepping out of your comfort zone, facing your fears, and putting in more work than applying a face mask, but as these five folks show, it can be more than worth it.

Faith As A Form Of Action

Every Friday evening, Meg Keene, the founder of the wedding planning site A Practical Wedding, gathers with her family to recite the Shabbat prayers and turn off her phone — even though she feels anxiety over the news that might await her when she turns it back on. “Shabbat is this invitation to step back and focus on family and friends, the people who really matter,” says Keene, who’s based in Oakland, California. “But it’s also a scary time, as a Jew, to be unplugged.” She recalls this past Yom Kippur, when she heard about the Halle, Germany, terrorist attack right before she turned off her cell for services. “I was scared, but I wasn’t going to be refreshing my phone,” she adds.

For Keene, rising anti-Semitism made her even more committed to her religious community — and, in turn, she’s discovered how self-care and activism can be intertwined. “I had always been political and outspoken, but in the past few years, I was noticing this rising anti-Semitism and found that people weren’t necessarily recognizing the gravity of what was happening to my community, and I really felt abandoned by people I thought were allies,” says Keene, citing discussions about Israel as an example. “There were conversations where people I thought were friends were saying really disturbing things about Zionism — when, from my perspective, replace ‘Zionist’ with ‘Jewish’ and the statement was really anti-Semitic.” Moments like these led Keene to reevaluate her relationships, forge deeper bonds with other Jewish women, and lean deeper into Jewish rituals.

For starters, Keene began wearing a Hebrew name necklace as a way to raise her visibility as a religious minority. She also began connecting with women around the country who were also Jewish and were also grappling with the same fear, confusion, and questions she was encountering. “The bedrock of self-care is human connections and relationships, and I’ve found connecting more to my faith to be a way to practice that self-care,” says Keene.

Today, she makes time for Talmud study, regular connection in real life and online with Jewish women, and sharing her perspective, voice, and opinions — even if divisive — to her nearly 5,000 Instagram followers. She teaches her children about the family’s Jewish faith and makes sure to decorate their home, placing multiple menorahs in the window during Hanukkah. “Having that community to depend on lets me speak out and share my truth,” she says. “I may be afraid, but I’m not going to hide.”

Sobriety As A Way To Battle Microaggressions

A few months before she decided to get sober in 2016, Jocellyn Harvey came home to a Ku Klux Klan flyer on her door. “The area I live in is very white, and I definitely knew it was targeted toward me,” says Harvey, who lives in Burlington, Vermont. Harvey, a daily drinker at the time, realized sobriety was essential for her future — but also recognized that rising external tension would make that lifestyle that much more challenging.

“There was a lot in coming to terms with my blackness in a very hard way,” says Harvey, on the early days after she gave up drinking. “After the election, there was heightened anxiety, and I would feel really nervous walking on the sidewalk. If I passed a few white guys, I would wonder, ‘Would these be the type of men who would push me into the street?’”

Those feelings made Harvey even more committed to prioritizing her mental health and identifying ways to manage and deal with racial tension. “Even though my sponsor is white and my therapist is white, both have the empathy and space to hear and validate my experiences, which is important,” says Harvey. Not drinking also led her to a months-long project in cleaning and decluttering her home, creating an oasis from the outside world.

Harvey’s Instagram account and website, Recovering the Home, chronicle that journey. She says leaning into different sobriety methods helped her remain sober and prioritize her self-care — a lesson she wants to share with other women. “I get people asking me, ‘OK, who else can I follow who is a black woman in recovery?’ And I have about five names I can give them,” she says. “But the bigger message is that you don’t have to do it alone. Recovery groups may not work for everyone, but they’re a place you can go where people instantly understand you.”

A Show Designed To Self-Soothe

“At the end of the day, we’re all going to fucking die, it’s a common denominator. So how do we enjoy pleasure on this planet?” says Twanna Hines, a nonprofit administrator, writer, and content creator who lives in Washington D.C. That question, and the desire to find a creative outlet for her feelings after the 2016 election, birthed her one-woman show called — yes — We’re All Going to Fucking Die.

In it, Hines reminds audiences that it’s OK not to feel OK, and despite the name, Hines says the part-autobiographical endeavor has given her hope and a clearer direction for the next phase of her career. “If I’m writing or doing nonprofit work, I don’t get direct feedback,” she says. “Maybe someone will tweet or I’ll get a ‘good job’ from a colleague, but in the theater, I see people nodding, smiling, crying.”

Hines says putting on the show helped streamline her career, too. “The self-reflection in working on this show made me realize that I had this passion for theater, activism, and engaging with people, so I could clarify what my business was,” says Hines, adding that the performance was able to help her pivot her marketing business toward working with more social justice and artistic clients. “The show helped me meld my personal strengths and my beliefs and come forward with a way to feel I’m making the world a better place.”

“As a Pisces, I cry. I feel everything so deeply — I am such an empath!” says Amy Quichiz, whose vegan collective, Veggie Mijas, has given her a place to channel those emotions. Quichiz, who became vegan in 2014, founded the women and nonbinary minority and marginalized group in 2018 to meet, discuss, and organize around food accessibility. “As I became more aware of the repercussions of food accessibility and environmental racism, I wanted to advocate for my community,” says Quichiz, who lives in Queens, New York.

Today, Quichiz says the community has become a critical part of her self-care routine. “This balance of caring for others while taking care of people and the soil around me is powerful; it almost feels like magic,” says Quichiz, on how her vegan lifestyle has become a way to create a self-care regimen in between organizing, protesting, and educating. “I love that what I eat nourishes me, makes me feel good, makes me feel like I can run afterward, while also saving animals, trees, and everything that gets lost in eating meat and dairy. It feels good knowing that I can make a difference in whatever way I can, on my own time.”

Quichiz also says the community she’s created has been key in helping her feel less isolated and helpless in the face of events like the recent Australian wildfires. “We’re going to start a fundraiser for the animals that have been hurt and indigenous folks who have been deeply affected,” says Quichiz. “My sister-in-law actually lives in Australia and says that many vegan places are saying, ‘Community, pay what you want to give’ — in other words, ‘Please eat vegan in time of crisis.’ I think that is so powerful.”

On Election Night 2016, Ary Lee gathered with friends, all LGBTQ community members and allies, in anticipation of celebrating Hilary Clinton’s win. While the group felt numb and overwhelmed as they watched Trump win the returns, they ended the night glad they had spent it together. From that evening came Renovous, a group for Atlanta-based people who identify as LGBTQ and Christian to come together, meet like-minded citizens, and seek opportunities for Bible study, socializing, and social justice initiatives.

As a member of the leadership committee, Ary Lee brought their partner, Preston, into the group after they began dating in 2017. Together, the two Atlanta, Georgia, residents have found their activism, both within and outside the group, key to maintaining their well-being. “One of the ways I was able to bounce back from the 2016 election was by leaning into Renovous,” says Ary, who leads a social justice group within the organization. Meanwhile, Preston found a way to process his emotions by focusing on his business, It’s Up to Us, a consultancy for transgender inclusion in the workplace. His work includes creating videos speaking up against hate and intolerance.

“I’ll hear about an anti-transgender proposal from Trump and feel like I need to make a video, speak out, and share the Bible verses I can find to prove my truth,” says Preston.

As a couple, the pair regularly volunteer in social justice initiatives and find that leaning in also means being honest both with themselves and with each other. “Self-care is admitting when you need to cry, when you’re not OK, and when you’re exhausted,” says Ary. “When we do these things, either with each other or with our friends, we are soothing ourselves to allow us to continue to get out there.”

This article was originally published on Feb. 3, 2020