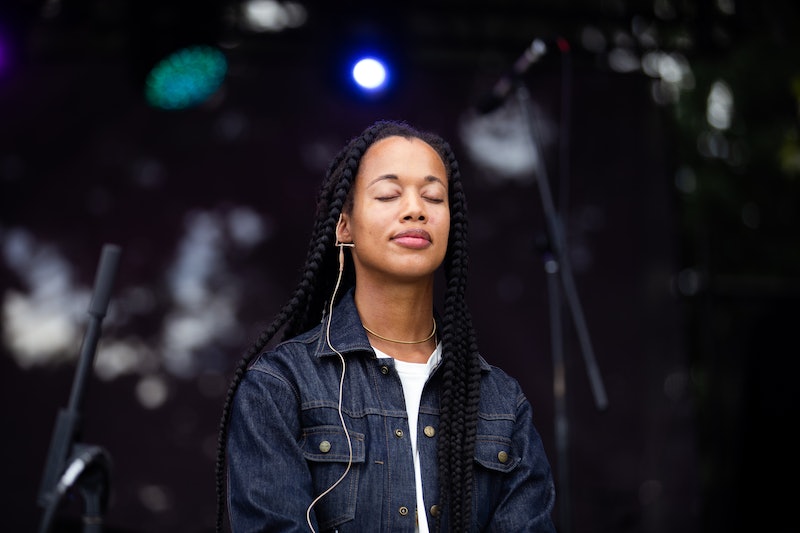 In the middle of Brooklyn’s Prospect Park on Saturday, Sept. 22, rows of people sat on the floor in hushed silence, eyes closed. From an outsider’s perspective, the crowd of cross-legged meditators may have looked like they were catching a quick snooze. In reality, Lauren Ash, founder of Black Girl In Om and all around wellness multi-hyphenate, was leading a guided meditation during Bustle’s inaugural Rule Breakers event, a day devoted to celebrating female and non-binary rule breakers everywhere.

Ash calmly sat barefoot on the stage, looking ever the wellness guru in a white cloud of a dress and a dark denim jacket. Some attendees also removed their shoes, clicking their phones off and settling into the black floor pillows, ready to get their “om” on for the next few minutes. In the midst of a crowded event, the mass meditation was a moment of serenity.

Ash's appreciation for personal wellness began in grad school, when she took up yoga. Yoga was "a very practical way to release my body's stress," Ash tells Bustle.

Soon, though, the practice became “a tool that I found my own healing within,” says Ash. The memory of series of racially-motivated hate crimes targeting three black women who lived down the hall from Ash before grad school influenced her path towards cultivating safe spaces for women of color. “For most my life, I had grown up in predominantly white settings and it was very normal to me to be the only black woman really anywhere,” says Ash. “But that experience woke me up to the power of my own identity...so when I fell into yoga in grad school, it was really a kind of beautiful next chapter that was building upon that foundation.”

Being the only black women in many traditional wellness and yoga studios spurred Ash to create more inclusive spaces where she didn’t see them. The name Black Girl In Om came to her within the first two weeks of her yoga teacher training, and soon, the holistic wellness platform for women of color was born. Along with providing Rule Breakers’ meditation session with a calming, intimate feel, Ash offered up some additional self care tips that any person, from wellness newbie to the most seasoned yogi, will find useful.