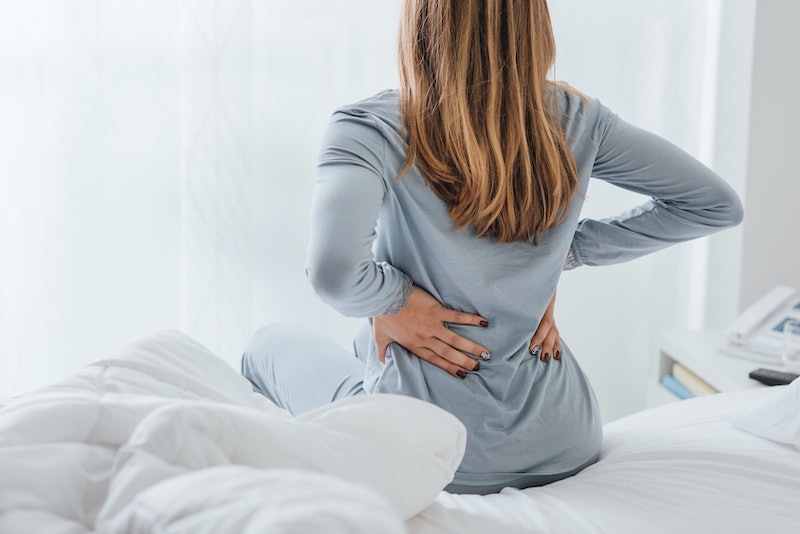 Most of us don't spend our time worrying about osteoporosis, as it seems like a condition that only affects older women. However, young women can be affected by bone density loss too, which is why it's important to pay attention to the signs of early-onset osteoporosis. Although osteoporosis — which is the thinning of bones where there is a reduction in bone mass — typically occurs in women around 50 years old, it is considered "early-onset" when it occurs before this age.

"Bones are 'alive' constantly, breaking down and building," Navya Mysore MDCM, CCFP tells Bustle. "Bone density is the highest in your twenties to thirties, but starts to decrease slowly after that. Early-onset osteoporosis is when the bone density loss accelerates quicker than expected for multiple reasons."

There are certain individuals who are more at risk for early-onset osteoporosis, according to Myseore. "These include young patients who are extremely athletic but nutritionally deficient, patients with a low BMI or a history of an eating disorder, prednisone use for other medical reasons at a young age, individuals with with Celiac disease, Crohn's disease, thyroid disorders and early-onset menopause or premature ovarian failure. Smoking and heavy alcohol use early on can also put you at risk."

Unfortunately, it's hard to spot osteoporosis early on, as it is usually painless and symptomless until it is too late and an individual has experienced a fracture. However, there are some signs you can look out for that might indicate the beginnings of osteoporosis, especially early-onset. Here are five signs you should be aware of, and consult with your doctor about, according to experts.