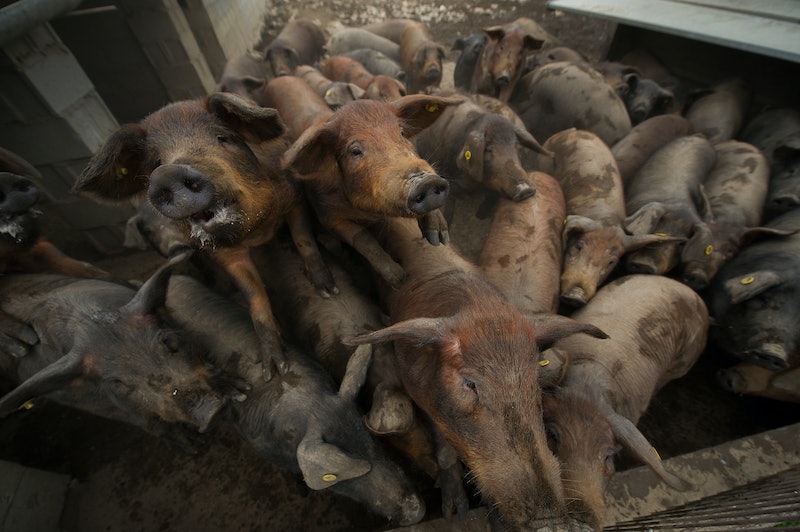 Let’s face it, the world is a scary place right now. From an unexpectedly orange president to ever-rising levels of CO2 in the atmosphere, the future of human civilization seems increasingly uncertain. The good and bad news is that the food on our plates could play a surprisingly large role in determining the fate of the earth.

There are over 9 billion land animals raised and killed for food every year in the U.S. alone. Yes, that's billion! And 99 percent of those animals spend their whole lives in confinement on industrial factory farms. Factory farming enables the average American to eat over 198 pounds of cheap meat every year, the second-highest rate of meat consumption in the world (we were recently outranked by meat-loving Aussies). But it turns out, raising so many living, breathing, eating, pooping animals is wreaking havoc on the environment and public health.

The title might seem like clickbait, but scarily enough, it's real. Here are five ways factory farming could end the world as we know it, and why moving towards a plant-based diet might be our only hope of avoiding catastrophe.

Let’s start with the obvious issue that everyone (except your Fox-News-watching uncle) is concerned could herald the end of homo sapiens. From rising oceans that could displace millions of people by the end of this century, to the sixth mass extinction, to increasingly extreme weather, climate change offers a medley of apocalyptic scenarios.

So what does this have to do with factory farming? Meat production is one of the largest human-made sources of greenhouse gases. According to the U.N. Food and Agriculture Organization, meat production creates more greenhouse gas emissions than all of the planes, trains, and automobiles in the world combined. If everyone in the U.S. ate no meat or cheese just one day a week, it would be like taking 7.6 million cars off the road. Which seems more realistic, convincing 7 million people to sell their cars, or convincing people to order veggie burritos instead of beef burritos one day a week?

How to prevent it: At a time when there’s approximately 0.0 percent chance of the federal government introducing legislation to curb the oil and gas industry and support renewable energy, the carbon footprint of our food choices becomes even more significant. Eating less meat is one of the most direct and effective ways we can help stop climate change.

There’s a reason that all of the terrifying movies about pandemics start with people being infected by animals (think Outbreak, Contagion, 28 Days Later). From the medieval bubonic plague, to the 1918 Spanish flu that killed 20 million people, to the recent Ebola outbreak, often the deadliest diseases are zoonotic — transmitted from animals to people. Two modern zoonotic diseases are particularly alarming.

One is avian flu. Some forms of avian flu spread from bird to bird, some spread from bird to human, and, in the worst case scenario, some could spread from bird to human and then human to human. In 2015, more than 48 million chickens and turkeys on factory farms in the U.S. were killed to prevent the spread of an H5N2 avian flu outbreak; luckily the H5N2 virus did not spread to humans. China is currently experiencing an outbreak of H7N9 avian flu, which can spread from bird to human; it killed 79 people in January alone. Scientists created a variation of the H5N1 bird flu in the lab capable of airborne transmission, which would enable it to spread from person to person like the standard flu. It would require only five mutations for H5N1 to naturally evolve this capacity, at which point we could be faced with a pandemic as contagious as the Spanish flu and with a mortality rate equivalent to Ebola.

Another zoonotic disease called Nipah spreads from factory farmed pigs to people, and is on the World Health Organization’s list of diseases most likely to cause a global pandemic. It infects people’s brains, causing paralysis, coma, and death, and is spread through the lungs so it is highly contagious. With both avian flu and Nipah, the billions of animals kept in dirty, cramped conditions are facilitating the spread of these dangerous diseases.

How to prevent it: One of the best ways to help lessen the risk would be to lessen the number of animals raised for food. Ironically, another zoonotic disease could help with that: People bitten by the Lone Star tick can develop a potentially fatal allergy to all red meat products, and in some cases dairy. The tick-caused meat allergy has been spreading across the southern and eastern U.S., with a sharp increase in cases in the last few years.

Of course, you don’t have to get bitten by a tick to avoid eating animal products and all of the potentially-fatal zoonotic diseases that they engender. You can still enjoy all your favorite foods, just made from cleaner and more sustainable plant-based sources (Ben & Jerry’s ice cream? Check! Smoked apple sage sausages? Check! Double cream chive cashew cheese? Check!).

To make matters even worse, factory farms are breeding bacteria that are resistant to antibiotics. Over 80 percent of antibiotics in the U.S. are given to animals on factory farms. Antibiotics keep animals alive despite the filthy, stressful conditions on factory farms, and they are growth-promoting, so animals given antibiotics grow faster and are thus more profitable to agribusiness corporations. They are also a threat to modern medicine.

The FDA has known since 1973 that giving antibiotics to farmed animals posed a risk to human health, but they continued to allow farmed animals’ food and water to be laced with 18 “high risk” antibiotics. Since then, we have seen the rise of “superbugs” that are resistant to antibiotics. MRSA, a type of staph infection resistant to methicillin antibiotics, kills more Americans every year than AIDS, and there’s evidence that it originated on factory farms.

In January, we passed a disturbing milestone when a woman in Nevada died of an infection that was resistant to every type of antibiotic available in the U.S., including a “last-resort” antibiotic called colistin. Colistin has potentially dangerous side effects, but it used to be relied upon when treating bacteria resistant to other antibiotics; now immunity even to colistin is spreading, thanks to its use on pig factory farms in China.

How to prevent it: Factory farms are pushing us towards a “post-antibiotic” age, one in which you could die from scraping your knee, getting strep throat, or having a C-section. So if you want to avoid urinary tract infections that are resistant to antibiotics (can you think of anything worse?), then you might want to lay off the chicken.

Combine threat #1 with threats #2 and #3, and you get threat #4, shortages of food and fresh water. Changing weather patterns due to climate change have already lowered crop yields by 10 percent and could drop another 11 percent, at a time when the global population is expected to climb to 10 billion. Likewise, one billion people may face water scarcity due to climate change.

Because the food system in the U.S. is highly centralized, it’s also vulnerable to contamination. One hamburger patty contains meat from up to 100 different cows. Imagine if just one of those cows was infected with a dangerous zoonotic disease how quickly it would infiltrate the food supply.

How to prevent it: There’s no need to start hoarding canned goods and shotguns just yet. We can help stop all of these problems just by eating different foods. One study found that if we cut global meat consumption in half, and used all of that farmland to grow fruits and veggies to feed directly to people, we could feed every single person on earth today plus an extra 2 billion people. Eating a veggie burger instead of a hamburger (just once!) saves as much water as skipping a month's worth of showers.

Combine #1-4 and you get… zombie apocalypse! Ok, not quite, but something close to it. There is already evidence that food and water shortages caused by climate change were factors in the Syrian civil war and refugee crisis.

So now imagine millions of climate refugees, plus global food and water shortages and skyrocketing food prices, plus outbreaks of disease that are resistant to antibiotics. Not a pretty picture, is it?

How to prevent it: We can help stop all of those catastrophes by reducing the number of crop-and-water-guzzling, greenhouse-gas-producing, zoonotic-disease-spreading animals raised for meat and dairy, by eating more delicious (and inexpensive) veg protein. So what are you waiting for, you can save the world with your next meal!