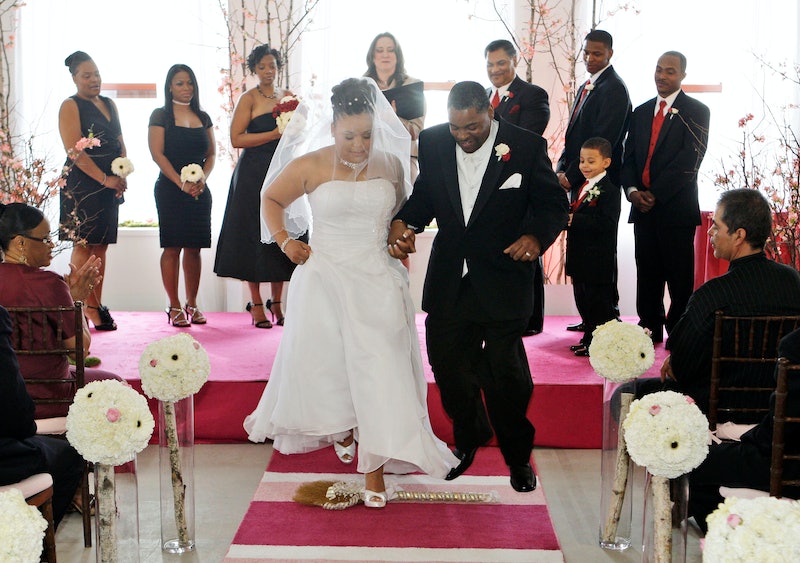 For an occasion as intimate as one’s wedding day, it’s only natural to want to bring your entire self to the ceremony. For the African American community, one of the best ways to celebrate the journey of single life to marriage is through the tradition of jumping the broom.

Jumping the broom symbolizes the couple’s entrance into a new life of their own creation by symbolically “sweeping away” their former lives, issues, and concerns. According to the African American Registry, the significance of the broom is deeply rooted in African American heritage. Its history originates in the West African country of Ghana, which was ruled by the Asante or Ashanti confederacy, where everyday brooms were a symbol in spiritual life. “The broom in Asante and other Akan cultures also held spiritual value and symbolized sweeping away past wrongs or removing evil spirits,” the African American Registry details.

The tradition came to the Americas along with the Asante people during the slave trade, and played a role in solidifying partnerships during a time where enslaved people were forbidden from getting married. After slavery ended, and Black people were allowed to have traditional weddings, the tradition fell off until the 1970s, according to Insider, with the release of Alex Haley’s book turned mini-series Roots. (The plotline follows the journey of Kunta Kinte, a West African warrior sold into slavery, and shows him jumping the broom with his wife, Bell.) From then on, the custom has been considered a staple in wedding ceremonies by many to honor their ancestors.

Here's how it works: Once a couple has said their vows and kissed, before walking back down the aisle, they jump over the broom to leave their past behind and solidify their entrance into a safe, happy marriage. Today, the tradition is still regularly practiced by the Black community and has several references in pop culture, such as OutKast’s song “Call the Law” or the 2011 film named after the tradition.

While for some the custom is inherited from family members before them, others see it as their way of starting a new tradition to pass down through the ages. Bustle spoke to five Black women about what the special and sacred tradition means to them.