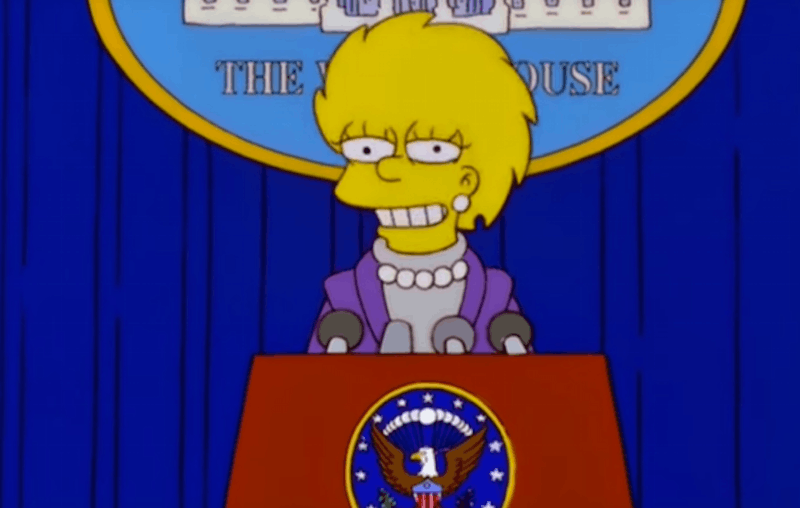 For this humble writer, there is no greater feel-good show than The Simpsons. Being a bookworm who loved school and rarely kept her opinions to herself, the Lisa episodes were naturally my favorites.

If you’ve been spending more time at home lately and want a great pop culture project, revisit some of those episodes! Not only do the jokes hit harder as an adult, but Lisa is even more impressive at second (or seventeenth) watch. Seeing her through a kid’s eyes, her extraordinary missions almost seemed simple. Whether she was fighting the demolition of the Springfield Forest, some casual sexism in the toy industry, or anything else, she always went up against the man to fight for what’s right. Whether she won or lost, she was always inspired optimism. It’s hardly an overstatement to say she’s a patron saint for feminist overachievers everywhere, and a reminder that one girl can shake up society.

Not to mention, she was a great example for keeping those grades up. Here are some of our favorite classic Lisa-centric episodes of The Simpsons that will inspire your inner A-student.

Stream all these classic episodes on Disney+, and make sure to catch the new Simpsons original episode on the streaming service, "Playdate with Destiny," highlighting the youngest Simpson strong female, Maggie.

We only recommend things we love and that we think you will, too. We may receive a portion of sales from products purchased from this article.

Inspired by a walk through Springfield Forest, Lisa writes an award-winning patriotic essay that brings the family to Washington, D.C. But her faith is compromised when she spots a corrupt congressman taking a bribe to demolish the very forest that epitomizes the beauty of America. Fiery as ever, she tears up her old speech and writes a new one called “Cesspool on the Potomac” outing the crooked public servant. Though her new speech is less “crowd-friendly,” her bold move brings the congressman to justice — reminding us that when you stick to your guns, you can never really lose.

After improvising in band class, Lisa is chastised by her music teacher, which plunges her into a melancholy existentialist phase. She finds an artistic kindred spirit in blues saxophonist Bleeding Gums Murphy, who introduces her to the blues and shows her how to channel her sadness into something beautiful. Though the world might not understand Lisa, it’s clear that Murphy does when he performs a piece she wrote. Whoever believes that second-graders can’t write great music hasn’t met Lisa Simpson.

Our girl’s identity as “the smart girl” is challenged when Allison, an overachieving (and younger) new girl, moves to town. Instead of befriending Allison, Lisa is threatened by Allison innocently coming for all of her titles, from teacher’s pet to first-chair saxophone. Overcome with jealousy, Lisa tries to sabotage Allison’s diorama fair project, only to be driven mad with guilt. The smart girls bond when their labored-over projects lose to a box of figurines presented by the clueless but lucky Ralph Wiggum. It’s a great reminder that comparing yourself to others leads nowhere, whether you’re looking at a younger, smarter person, or the class simpleton.

This episode shows Lisa’s many dimensions: vulnerable, savvy, and fierce. For the first time, we see Lisa affected by life’s more superficial influences. After having her caricature done at a fair, she’s worried that she might be ugly. Homer enters her in the Little Miss Springfield pageant to boost her self-esteem. The two set out to make Lisa a winner, doing as the pageant Romans do, getting into the “flashy performance” and “vaseline-glazed teeth” of it all. When an accident befalls the winner and Lisa takes over her duties, she fights back against greasy cigarette product placement and becomes the wokest Little Miss Springfield ever. “The Man” over at Laramie Cigarettes naturally takes notice, stripping her of her title on a technicality. But in the end, she reminds her dad that the overall mission worked — it was always about helping bolster her self-esteem, and it did the job. Being the eight-year-old girl who sent big tobacco into a frenzy, you would feel that way too.

I have one question: Where can I get a Lisa Lionheart in 2020? Disenchanted with the sexist sound bites loaded into a talking Malibu Stacy doll (i.e. “Don’t ask me. I’m just a girl!”), Lisa springs into action. She tracks down the ousted Stacy creator, and the two team up to create what culture can honestly call the first feminist doll, Lisa Lionheart. When the doll gets buzz, the toy execs fight back by creating a buzzy “new” Stacy (now with a hat). The masses are duped, but it’s worth seeing a few hopeful girls choosing Lisa Lionheart as their role model.

Through a vision of the future that Bart experiences, we see that 38 year old Lisa becomes the first “straight female president” of the United States. Bart, on the other hand, is a 40-year-old man-child with a beer gut and a music career that never really launched. Though the episode is primarily through Bart’s perspective, this episode confirmed what we all knew would come to pass: Lisa was meant to be president. Let the budding leaders of the world rejoice!

Check out the entire Simpsons collection, along with tons of other content, on Disney+. While you're at it, consider sending someone an annual gift subscription.