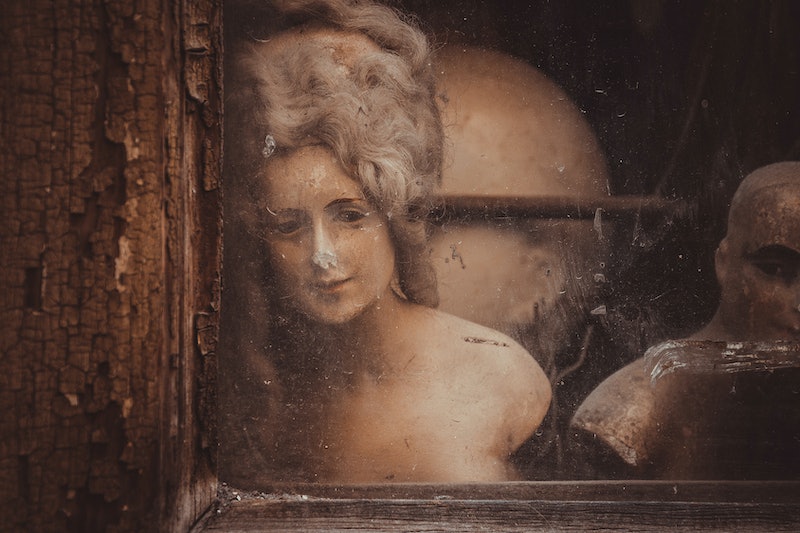 As the full moon rises, you might start feeling a little restless. Maybe it's because the moon is as bright as your childhood night light, so it's keeping you up in the dead of the night. Or, maybe it's because the pull of its energy is leeching ~something~ out of you — sort of like that Rockwell song, "Somebody's Watching Me." Hey, the full moon is sort of eerie — and even moreso if there are things making it bigger than usual, like, for instance, a supermoon. This in mind, it's not surprising that there are creepy things that have happened during the supermoon — and they'll keep you up at night for a whole other reason.

It's sort of like a tickle in your throat. You feel like something's just ... off. But you can't really diagnose it. Such is the story with many full moons. Around that time of the moon cycle, you might start feeling a little more inclined to howl with the wolves. There's been speculation and scientific investigation to dismantle the claims that things get a little ~off their rocker~ when a full moon rises in the night sky. Some write any kooky happenings and lack of sleep off on the spotlight cast by the beams. And while that does make sense, it doesn't mean those weird, spooky and creepy things don't not happen.

A creepy story is a creepy story. Set under the stage of the bright supermoon is the perfect ambiance for these tales and common happenings. When 2017's only supermoon rises, said to be brighter and larger than any other full moon we've experienced this year, you might just experience something that makes the hair on your arms stand up straight.

The Tides Have Changed

All full moons seem to have an affect on our waters thanks in part to the moon's gravitational pull. When the full moon orbits and reaches perigee, meaning the closest it can get to Earth and therefore being dubbed a supermoon, this pull can be a little more ~dramatic~.

Popular lore of the full moon is that more crime seems to occur on these nights. While research has been conducted to debunk the myth, people still take caution on nights where dark streets are better lit by the moon's bright beams.

Sure your dogs might be barking at the back door a little more than usually which is unsettling as it is. But a creature in Argentina called the owl monkey are reported to be more active on nights of the full moon. Give animals a brighter supermoon and who knows what wild things could happen.

You Won't Be Able To Sleep

Bright full moons mean there's enough light to cast shadows. Whether you're a ghost hunter here to debunk the movement in the corner of the room or not, there's no denying that seeing something — a shadow or not — move across the wall will having you shivering under your covers.

In the past patients have claimed that their seizures have escalated when there was a full moon above. The moon has always had a pointed finger at it to explain strange occurrences surrounding medical conditions.

Surgery Outcomes Have Been Affected

If you have to get a surgery, you have to get your surgery. Thankfully medical professionals know what they're doing regardless of what state the moon is in. However, some people have been wary about getting cut open when a full moon is above them. Some astrologists even advise to get a surgery sometime around the full moon but not directly under it to avoid its effects.