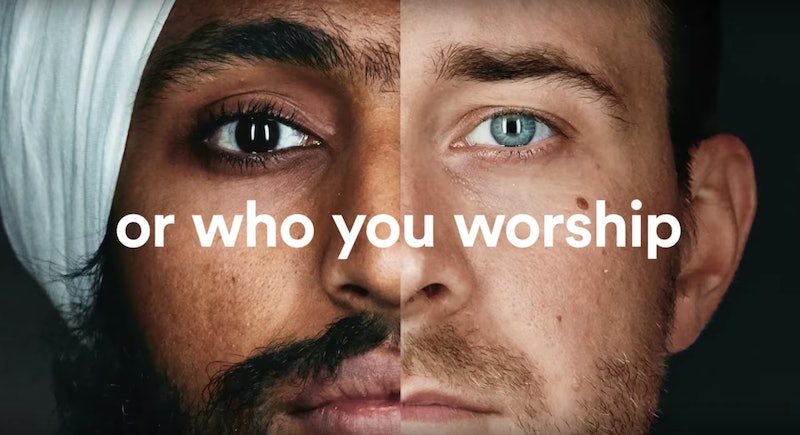 The Super Bowl is famous for its unique and often hilarious advertisements — some people even watch the game just for the ads. But ads this year could hold more subliminal messages than usual, what with the political tension surrounding the new president's myriad of executive orders. Some companies seemed to make subtle Donald Trump digs in Super Bowl commercials.

Of course, any political statements likely needed to be indirect, since either the network or the National Football League could reject ads for being too political or divisive. For instance, Fox rejected advertiser 84 Lumber's intended Super Bowl spot for showing both a border wall and immigrants, CNBC reported.

But this hasn't prevented some advertisers from making potentially controversial statements with their 30-second spots. "It's Beautiful," Coca Cola's 2014 Super Bowl ad featured a multicultural cast singing "America The Beautiful" in different languages. This led to some viewers threatening to boycott the brand over the ad, while others supported the spot's message of diversity and inclusivity. Coca Cola paid to once again broadcast "It's Beautiful," during the 2017 Super Bowl. The company also added another two ads, one for Sprite, with less political undertones to the mix.

With so many advertisers choosing to send subtle messages to Trump, there might well be significant backlash from his supporters. But in the meantime, here are some Super Bowl commercials that are seemingly aimed at Trump.

"You don't look like you're from around here," is the first line of Budweiser's Super Bowl commercial, which shows some of the hardships faced by the company's founder, Adolphus Busch, who immigrated to the United States from Germany in the 1800s. The pro-immigration stance of Budweiser's commercial in the wake of Trump's executive order temporarily halting travel from seven majority Muslim countries did not go unnoticed. Budweiser, however, said the ad is meant to "highlight the ambition of our founder, Adolphus Busch, and his unrelenting pursuit of the American dream," Fortune reported.

The Twitter hashtag #BoycottBudweiser began trending after the ad's release, but some people used the hashtag to express their positive feelings about the brand's immigration ad instead.

Airbnb's Super Bowl spot was apparently a last-minute buy by the company. The wordless ad features a racially diverse group of peoples' faces, with words placed on top. After the ad's release #WeAccept began trending on Twitter, and Airbnb released a letter from the company's founders. "Today we're setting a goal to provide short-term housing over the next five years for 100,000 people in need," the founders wrote.

Airbnb has also pledged to donate $4 million in the next four years to the International Rescue Committee. Though neither the ad nor the letter mention Trump directly, it seems pretty clear that the company is taking on Trump's policies on refugees and international travel.

Coca Cola's "It's Beautiful" is three years old, having been created for the 2014 Super Bowl, but the company's decision to bring back the highly-discussed ad for this year sends a pointed message. "It's Beautiful" received backlash from people who didn't think the song "America The Beautiful" should be sung in languages other than English.

Trump has been known for differing from his political opponents by sticking to English as his campaign language rather than running ads in Spanish as well. He also told Jeb Bush during a televised debate, "This is a country where we speak English, not Spanish." In wake of Trump's views on immigration and his "English-only" ideology, it seems evident that Coca Cola's choice to air "It's Beautiful" was no random decision.

Trump's been pretty upfront about his desire to build a wall along Mexico's border and then implement a 20 percent tax on imports to pay for it. But Mexican avocado brand Avocados From Mexico still purchased a Super Bowl spot, in which comedian Jon Lovitz "hypnotizes" viewers into buying Mexican avocados.

Alvaro Luque, president of Avocados From Mexico, told CNBC, "We always stay away from political stuff," but by continuing to promote a Mexico-based brand to American consumers, Avocados From Mexico is making a strong statement about U.S.-Mexico relations.

Audi's ad about equal pay follows the thoughts of a father watching his daughter compete in a soapbox race. In the end, the daughter wins the race, and Audi broadcasts the message, "Audi of America is committed to equal pay for equal work. Progress is for everyone."

Audi's ad follows Trump's infamous comments about women, including the leak of the Access Hollywood tapes. In this case, it might seem that Audi's message about gender equality is targeted towards Trump's derogatory comments towards women.

NFL "Inside These Lines"

The NFL's ad, "Inside These Lines," shows scenes of unity from football history. A message of togetherness in spite of personal differences is a common thread throughout the ad, with the narrator at one point saying, "Inside these lines, we may have our differences, but recognize there's more that unites us." The final moment of the ad is possibly the most powerful; lines are shown being drawn on the field, but in the end it turns out to be a map of the United States.

The ad doesn't have an overtly political message; it is pretty bipartisan. At the same time, the ad makes a point of mentioning diversity and saying that "we don't have to come from the same place to help each other reach the same destination." It may very well be a subtle jab at some of Trump's more exclusionary policies, such as the travel ban.

Technically, this ad was rejected by the NFL for being too controversial; only a few seconds actually ended up being shown during the Super Bowl. Still, 84 Lumber's website actually crashed at one point from the number of people who were trying to watch it. The nearly six-minute full ad details the journey of a mother and a daughter through Mexico to the United States, only to be stopped by a giant wall. It ends with the message, "The will to succeed is always welcome here."

"Ignoring the border wall and the conversation around immigration that’s taking place in the media and at every kitchen table in America just didn’t seem right," Rob Shapiro of Brunner, the agency that worked with 84 Lumber to create the ad, told The Washington Post. "If everyone else is trying to avoid controversy, isn’t that the time when brands should take a stand for what they believe in?"

We'll have to wait and see whether brands decide to take political stances in the coming months, but given the number of ads with political connotations this Super Bowl, it seems like the trend of advertisers sending messages beyond their products probably won't be ending any time soon.