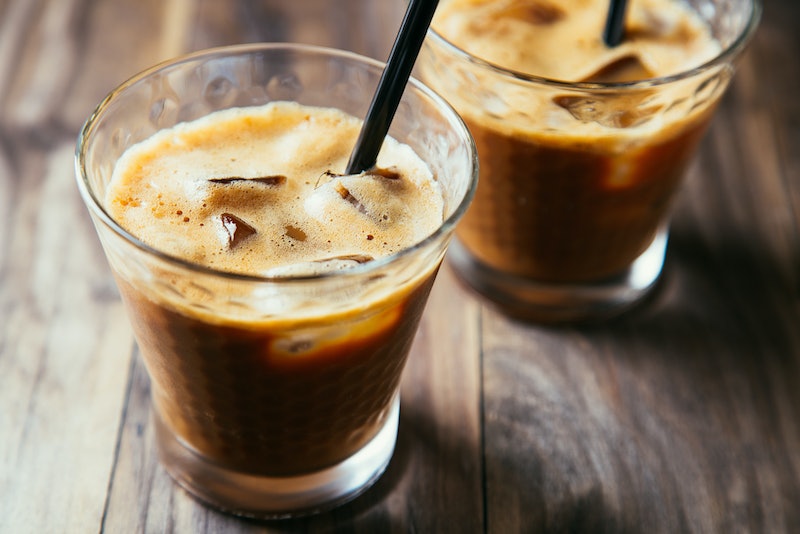 It is an undeniable truth that cold brew coffee is the nectar of the gods, and though yours truly is one of those people who believes cold brew is a year-round beverage, now that we're in the thick of summer heat, it's officially cold brew season for all of us. Since cold brew is a relatively new addition to a lot of popular coffee chains versus older standbys, it may seem a little mysterious when it comes to making your own at home, but rest assured there are plenty of cold brew coffee hacks out there to help you maximize your summer caffeine sitch.

Though cold brew and iced coffee appear similar on the surface, one of the important things to know about cold brew is that it is actually pretty different from iced coffee. According to Starbucks' coffee blog 1912 Pike, because cold brew is never touched by heat, making it "creates lower acidity for a smoother, naturally sweet taste," while iced coffee is "brewed double strength [hot] then cooled, which creates a refreshing, lighter body."

Aside from the taste, one of the biggest differences you'll notice between cold brew and iced coffee is the brew time. Review site Little Coffee Place notes that cold brew has a long brew time, and is brewed as a coffee concentrate, while iced coffee has the same brew time as your regular ol' cup of joe. Little Coffee Place does caution that because of the quick brew and the addition of ice, iced coffee can turn out weak or bitter — but thankfully with cold brew, that won't be an issue.

If you've never made cold brew at home before, the process couldn't be simpler: Just dump ground coffee in the brewing apparatus of your choice — a specific cold brewer, a french press, or a regular jar all work fine — cover with cold water, steep overnight, then strain in the morning. Coffee company Trade suggests 3.5 ounces of coffee to 28 ounces of water for a ready-to-drink cold brew, rather than a concentrate.

But if you're already a practiced cold brew artiste, you may be searching for ways to take your summer water to the next level. Without further ado, let's take a look at how to give yourself the gift of excellent cold brew without having to walk down to your local coffee place.