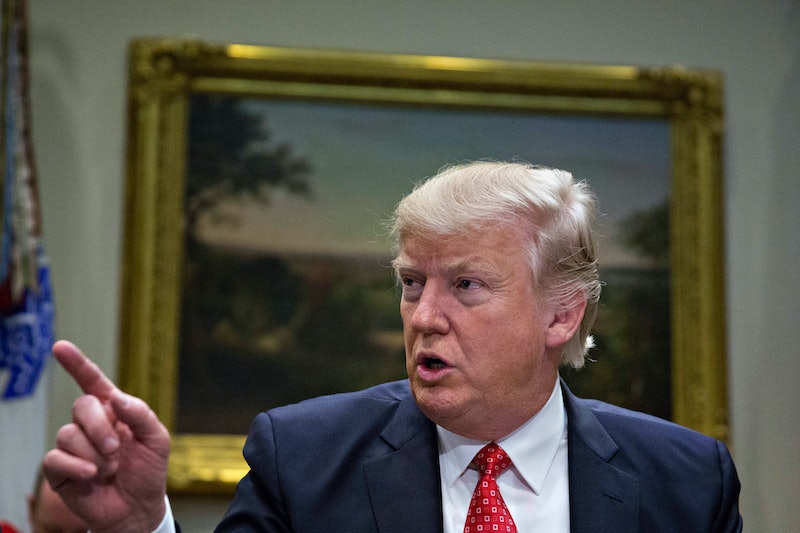 None of Trump's executive orders have had quite the level of backlash as his executive order restricting refugees and travelers from seven majority-Muslim countries. While protests against the executive order have been occurring throughout the country, as of this week, tech companies entered the fray in a new way. As Reuters reported, more than 100 tech companies banded together to file a legal brief opposing the restrictions, arguing that it would be detrimental to U.S. business interests.

In the "friend-of-the-court" brief, the companies, including Apple, Microsoft and Google, argued that highly-skilled foreign talent, who U.S. tech companies would be eager to hire, would be less likely to take a job in a country where their immigration status would not be constantly under threat and where they potentially could not travel freely in and out of the country. Additionally, they argued that U.S. companies may be inclined to move offices abroad, if this policy was to remain in place.

While these tech companies took a strong stand on Sunday, corporations in other industries began disassociating themselves from the Trump family as early as 2015, when Trump first announced his presidency. After Trump made disparaging remarks about Mexicans, Macy's dropped his clothing line from their stores. Other retailers that carried Trump goods, like Wayfair and Bellacor, followed suit and cut ties with the bombastic businessman after becoming the targets of boycott campaigns like #GrabYourWallet.

Nordstrom made headlines last week when the retail store announced it would no longer carry Ivanka Trump's clothing line. The department store said the move was attributed to poor sales and was not a political stand (though it's possible sales have dropped because people are boycotting the first daughter's items). But there are plenty of other companies that are actively speaking out against Trump's actions, specifically his immigration policy.

Google supported a strike by more than 2,000 employees last week, in protest of Trump's immigration policy. Co-founder Sergey Brin himself participated in the protests at San Francisco International Airport after the executive order was announced. The company also created a crisis fund that will benefit the American Civil Liberties Union (ACLU), Immigrant Legal Resource Center, International Rescue Committee and the UN Refugee Agency. Google's largest crisis campaign to date, the company has contributed $2 million to the cause, and will accept up to $2 million in matching donations from its employees.

Uber has been accused of being on both sides of the coin in the travel executive order battle. The ride-share company continued service to New York City's JFK Airport during a taxi strike in protest of the immigration ban; however, CEO Travis Kalanick did create a $3 million defense fund to aid Uber drivers who would be impacted by the travel ban, like U.S. drivers who were out of country visiting relatives, and are now unable to return and will therefore lose work. Kalanick had joined Trump's business advisory council, but after hearing concerns from Uber employees and drivers, Kalanick stepped down from the council last week. He said that though he had hoped he'd be able to influence policy in that role, his involvement with the council was mistakenly interpreted as an endorsement of Trump's agenda. "There are many ways we will continue to advocate for just change on immigration but staying on the council was going to get in the way of that," Kalanick wrote in the staff email.

After Trump's executive order placing a 120-day suspension on admitting refugees to the United States, Starbucks CEO Howard Schultz announced that the company would aim to hire 10,000 refugees over the next five years. And that's not the only Trump policy Schultz plans to push back against — with the impending repeal of the Affordable Care Act, he said that Starbucks will continue to offer health insurance benefits to its employees.

Airbnb aired a pro-immigration ad during the Super Bowl with the hashtag #WeAccept. After Trump's immigration ban was enacted, the company announced that it would provide free housing to refugees unable to enter the United States. Now, the company's #WeAccept campaign will aim to provide short-term housing for 100,00 people in need over the next five years, including refugees, disaster survivors and relief workers. Airbnb will also donate $4 million to the International Rescue Committee over the next four years.

Founders of the ride-share app Lyft condemned Trump's immigration ban and said the company would donate $1 million to the ACLU over the next four years. "Banning people of a particular faith or creed, race or identity, sexuality or ethnicity, from entering the U.S. is antithetical to both Lyft's and our nation's core values," the company's founders wrote in a letter to customers. "We stand firmly against these actions, and will not be silent on issues that threaten the values of our community."

Elon Musk has caught criticism for retaining his seats on both Trump's business advisory council and manufacturing job initiative, but he threw his weight behind the tech legal brief on Monday, adding his companies Tesla and SpaceX to the dozens of tech companies opposing the executive order. While Uber's CEO left Trump's advisory council, Musk has defended his choice to stay, tweeting "Activists should be pushing for more moderates to advise President, not fewer. How could having only extremists advise him possibly be good?"

Facebook COO Sheryl Sandberg is well known for her initiatives to empower women, and in a Facebook post last week, she not only decried the executive order, but she pointed to the negative effect it will have on refugee and immigrant women. "Young women caught in refugee status are highly vulnerable to violence and exploitation and also often lose the chance at an education," Sandberg wrote. "We know that no investment has a higher return than girls’ education — for them, for their families and for the countries they may someday help rebuild."