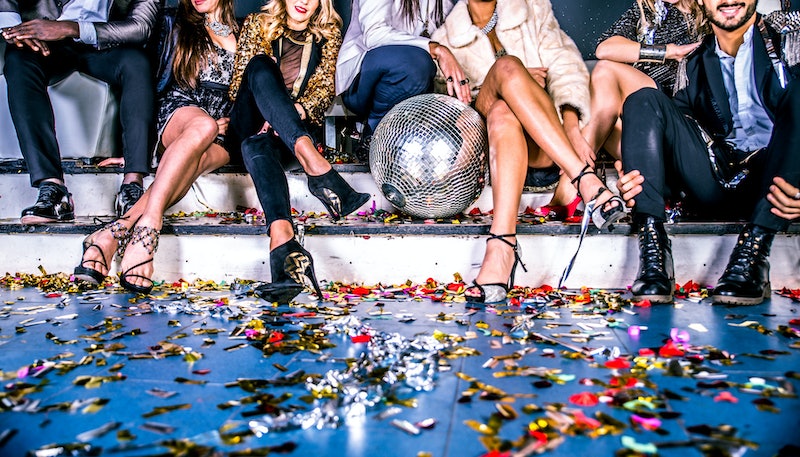 New Year's Eve has been celebrated for more than 4,000 years, and with such a long history there are bound to be myriad creepy stories about NYE madness and mayhem. The creepiest things that have happened on New Year's Eve run the gamut from a naked peeping Tom wearing a Ronald Reagan mask, to people spotting otherworldly shadow creatures in the middle of the road. While most creepy stories are associated with Halloween, New Year's Eve originally began when the Babylonians started a tradition of welcoming each new year with a massive religious festival called Akitu, according to History.com.

"In addition to the new year, Atiku celebrated the mythical victory of the Babylonian sky god Marduk over the evil sea goddess Tiamat." New Year's Eve activities have certainly evolved since then, and today the holiday best known as a time to reflect over the previous year while also setting intentions for the year ahead. With the slaying of monsters reserved for Stranger Things, for most people New Year's Eve is a night of massive celebrations when expectations are high, drinks are flowing, and everyone is out to have a good time.

And, when you let your guard down, creepy things can happen when you least expect it — like that horror movie where an intruder is calling from inside the house. Don't believe me? These creepy things that have happened on New Year's Eve just might change your mind.

OK, so I used to watch General Hospital, and at one point there was a a mystery figure offing people in the sleepy town of Port Charles. Because each person received a text before the killer caught them in his trap, he became known as the text-message killer. One Reddit user had a similar New Year's Eve experience. And, while no one was hurt, the phantom texts would make anyone uneasy. Reddit user jay-eh began receiving text messages from an unknown number on New Year's Eve that said, "I'm outside."

The messages began to escalate, and at one point the mystery texter claimed to be inside the house watching jay-eh and friends. The texts continued throughout the night with the texter describing jay-eh's car and sending creepy texts while they were driving home that insinuated the texter was watching jay-eh. When others tried to call the number that jay-eh was receiving the texts from they got a message saying it was not a working phone number.

While the messages eventually stopped, the fear never really went away. "I haven't dived too deep into this. One on hand, I felt that something really bad could happen if I kept probing it," jay-eh wrote on Reddit. "And nothing has happened so far. But on the other hand, I don't have any closure and sometimes I get paranoid about getting another message."

One of my worst fears is seeing a strange face peering into my window. This is exactly what happened to an Alabama couple on New Year's Eve 2015. Only the peeping Tom was in the buff — with a sock covering his genitals — and wearing a Ronald Reagan mask. "I know a lot of people are laughing about it and, honestly, I got a chuckle from it later, but at the same time, it's very concerning,'' Danielle Yancey told Alabama Media news site AL.com. "I don't know what he was planning on doing."

Apparently Danielle's husband caught a glimpse of the naked peeping Tom while he was taking out the trash, and a home security camera confirmed that it was not all in his head. Police never caught the nude presidential peeper, and chalked the incident up to a drunken prank or a lost bet.

This one is pretty disturbing. A Florida man who told police he was angry with his mother used an axe to decapitate her on New Year's Eve 2014, according to CNN. The creepiest part is the mug shot taken after the man was arrested. In the photo he's smiling like one would for childhood school pictures. The man was apparently fed up with his mother nagging him about moving some boxes into the attic, Sheriff Bob Gualtieri told CNN.

4. The Lady In White

Perhaps you've had an experience of having a stranger turn up to your New Year's Eve party. This actually happened to me once, but it was no big deal and we invited her inside to join the festivities because had gotten lost and couldn't find the party she was actually heading to. However, Reddit user HITSguitar wrote that an unexpected guest materialized out of nowhere at their New Year's Eve party. All of the doors and windows were locked, and no one admitted to letting the old woman, dressed in white, inside the house.

Upon leaving the party, "she dropped two scarfs on the door step, nobody knows how she got in and me and my mom are freaking out cause we think that's a symbol of something, and it's not good," HITSguitar wrote, adding that a cousin saw the woman in his dreams a few nights later, though no one ever saw her again.

Have you every gotten the feeling that you're not alone even when you are? According to the website Wattpad, one woman had an unwelcome guest on New Year's Eve, one she could hear but not see. The trouble began when things started disappearing. The woman and her boyfriend kept losing items they were using only to have the reappear a few minutes later.

Later in the evening a strange man's voice joined the conversation, yelling "right!" in response to a comment one of the guests made. Eventually every guest heard an invisible person coughing in the bathroom even though there was no one there. The strange activity stopped the next day, so perhaps this ghost just really likes to join in the NYE festivities.

6. Scary Noises In The Woods

If you think camping is a low-key way to ring in the new year, this story might make you reconsider. Reddit user sarcasticbitchywolf was camping with friends when the noise of someone — or something — screaming began to terrify the group. If you've recently marathoned Stranger Things, then you know that hearing anything strange in the woods is pretty terrifying. This Reddit user was so scared that they abandoned their friends and left a note behind so their friends would know that they hadn't been eaten by a monster but had just gotten scared and gone home.

"You don't know what true vulnerability is until you're on the outskirts of the woods in a tent with three lives in your hands while some paranormal creature is hunting you, teasing you ... I sat there in silence until around six in the morning when I was certain it had stopped," sarcasticbitchywolf wrote. "I couldn't take it anymore — the damn thing had driven me insane. My work there was done as I was certain it was gone. I left ... a note that said I went home and I wasn't dead so I could reassure my friends when they woke up later on."

7. And Then The Zombies Came

Sometimes strange occurrences can be chalked up to having too much to drink, but Reddit user Hllblzr310 claimed that despite partying until around 2:30 a.m. on New Years' Eve, the not-quite human creature they and a friend encountered was real. "That's when we saw it. Something that looked like a naked person but wasn't quite human waddled down the street toward us. It moved as though it were half-squatting and because of this, its hands dragged along the ground as they hung limp at its sides," Hllblzr310 wrote.

"I couldn't make out its face, and Max told me later that he couldn't either. It was also making a throaty gurgling noise, as if it was almost choking on something." The author and Max did the only sensible thing, they got the hell out of there. While it's pretty likely that your New Year's Even could go awry in a number of ways — surging Uber prices, bad dates, even worse hangovers, and unmet expectations, you can now add Halloween-type creepy stuff to the list of reasons that it might just be better to stay home on New Year's Eve.

More like this
81 Epic Truth Or Drink Questions To Play 'Say It Or Shot It' With
By Bustle UK
Jennifer Lopez Found The Perfect Ben Affleck Throwback Video For Mother’s Day
By Stephanie Topacio Long
Here’s What Sarah Jessica Parker’s Canned Cosmo *Actually* Tastes Like
By Emma Garza
What Is “Night Luxe?” Breaking Down TikTok’s New Aesthetic
By Courtney Young
Get Even More From Bustle — Sign Up For The Newsletter