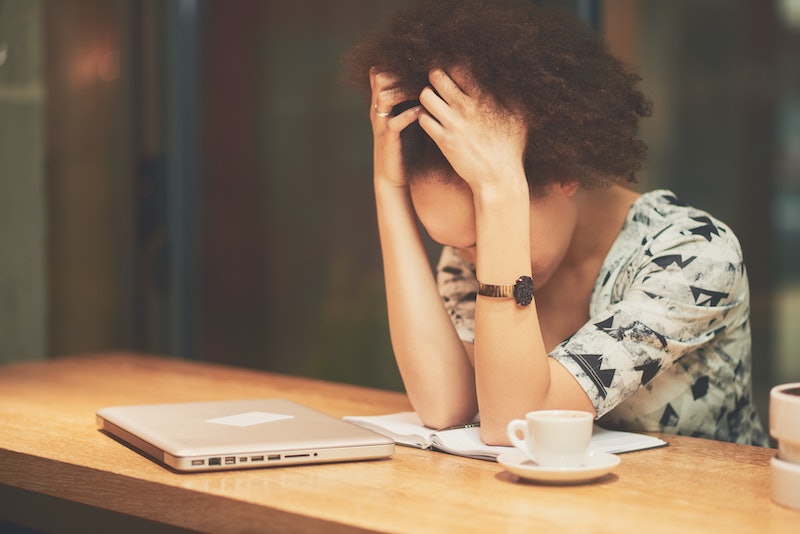 Next time you're at work, take a quick scan of your office. Notice anyone missing? When flu season is in full swing, there's a good chance that at least a few people are hacking up a lung at home. Hopefully, you can avoid becoming one of them, but it's important to know what early flu symptoms look like. The flu is known for coming on suddenly, but there are early signs if you know what to look for. That way, if you do catch the dreaded influenza, you'll be able to prepare yourself for what's to come. (Spoiler alert: There's a lot of coughing ahead.)

"A sudden feeling of overwhelming fatigue may appear before other symptoms," Niket Sonpal, an NYC-based internist and gastroenterologist, and adjunct assistant professor at Touro College of Osteopathic Medicine, tells Bustle over email. "People may attribute this to working hard, or a tough work out. While fatigue is also a symptom of the common cold, it is usually more severe with the flu. Scratchy or sore throat. In the earliest stages of the flu, your throat may feel irritated, scratchy, or sore. Generally there is just a feeling of 'malaise' that people may attribute to having a bad day and just needing a good night’s sleep."

In the Northern Hemisphere, flu season begins around October and peaks somewhere between December and February. It's no joke — most people recover within two weeks, but some people, including the elderly and very young, are at a greater risk for complications like pneumonia. Every year, according to the Centers for Disease Control (CDC), millions of people come down with the illness, hundreds of thousands are hospitalized, and thousands ultimately pass away.

The main way to prevent contracting the flu is to get your flu shot, if you are able. The vaccine not only helps protect you against seasonal influenza, but it also reduces the spread of the virus. "When more people get vaccinated against the flu, less flu can spread through that community," the CDC explains.

Unfortunately, it's possible (albeit unlikely) to catch the flu even if you get vaccinated, which is why you should know what symptoms to look out for. Read on to find out what early signs suggest you might have the flu.