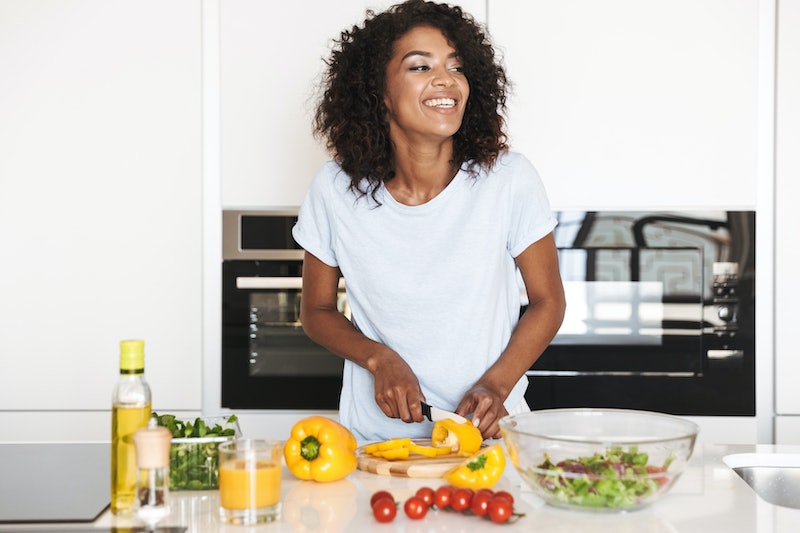 When you're having a bad day, science says you shouldn't automatically collapse on the couch; it might be a better idea to break out the recipe books. The emotional benefits of cooking are myriad; many programs around the world help people with mood disorders and other issues get into the kitchen as part of their treatment, a practice known as "therapeutic cooking." And it's something you can replicate in your own home, with a bit of effort and an ingredient or two.

Counselor Nicole Lambert of Movement Counseling Services tells Bustle, "Cooking helps mental health in that it can be a creative outlet. It's a way to channel energy, can be used as a distraction, help build mastery in a skill, and a way to express emotions through a different medium."

Of course, like exercise, just because cooking can be helpful for mental health doesn't make it easier to accomplish. Certain mood disorders, such as depression, can lower your energy levels and appetite, making it more difficult to convince yourself to cook. But studies have shown that, for many people, mental health benefits ensue when the oven gloves come out, even if the result is something simple. And the effects are particularly enhanced if you're cooking not just for yourself, but for others, too.

If you think this could be helpful for you but aren't sure where to start, don't expect to be dizzyingly brilliant in the kitchen at your first attempt; the skill of cooking takes practice, and all professionals and good home cooks have had years of stove time to refine their technique. Get a beginner's cookbook and start small. You might be building up a tarte de citron in no time. Here are seven surprising ways cooking can be good for your mental health.