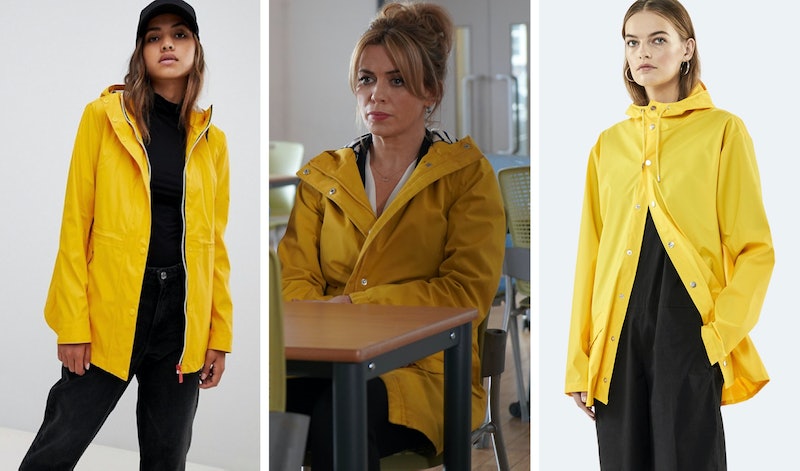 Certain costumes can define a film or TV programme, and there's not a more recognisable piece of clothing out there right now than the iconic yellow rain coat worn by Faith Howells in BBC hit Keeping Faith. The series, which follows Eve Myles' lead character searching for her husband Evan after his disappearance, is back for a second series, and along with all the plot twists and turns, the yellow jacket has also returned. With this in mind, I went on the hunt to find seven Keeping Faith yellow coat dupes.

So why is this particular yellow number so popular? Well, it seems as though the coat, despite being a little 'out there,' is still totally wearable and therefore accessible to the British public.

"We don't have the money to spend on a couture gown, but we do have £70 to spend on a coat. A yellow rain jacket like Faith's is rooted in the reality of living in the UK," she continued.

With Keeping Faith back on our TV screens weekly (series two premiered on 23 July, but is available to catch up on iPlayer), we are likely to see a lot more of Faith's most talked-about garment, and it's bound to become even more popular. With this in mind, I rooted around to find the very best dupes, from lightweight yellow rain macs to thicker parkas for the winter, and even more casual, shorter bomber jackets from the high street. Scroll down to check out my full edit of the seven very best:

Jacket
Rains
This super simple rain mac is water-resistant and has a chic matte finish. It's lightweight therefore can be worn in muggy yet damp conditions, too.
BDG Rowan Hooded Cotton Bomber Jacket
Urban Outfitters
If you don't fancy rocking a full length coat, this uber-cool bomber jacket may be worth a try.
Water-resistant Rain Coat
Banana Republic
This is the perfect yellow rain coat design, if you ask me. It'll keep you warm and dry, while looking so so cute.
Quilted Long Jacket
Arket
This slightly warmer option will serve you brilliantly come the winter seasons. Plus, it'll add a bright, youthful spring to your step when the weather outside is dull and dreary.
Sune Rain Coat
Weekday
I'm crushing hard on this bright mustard yellow design, which boasts extra handy and practical supersized pockets.
New Look parka coat in mustard with faux fur hood
ASOS
A lightweight rain coat might be OK for our rainy summer season, but come winter, this thick parka will keep you warm as well as dry.
Hunter lightweight rubberised yellow rain mac
ASOS
This high quality design by Hunter is worth paying a little more for. Made from a waterproof fabric, it is the perfect in-betweeny length.
More like this
23 Times Meghan Markle Dressed Just Like Princess Diana
By Bustle UK
Harry Styles' New Gucci Collab Is Serving Woodland Chic
By El Hunt
How To Get Your Hands On Manolo Blahnik’s Latest Birkenstock Collab In The UK
By Vivian Iroanya and Rachel Mantock
The Nike & Jacquemus Collab May Have Been Inspired By Princess Diana
By Frances Stewart
Get The Very Best Of Bustle/UK