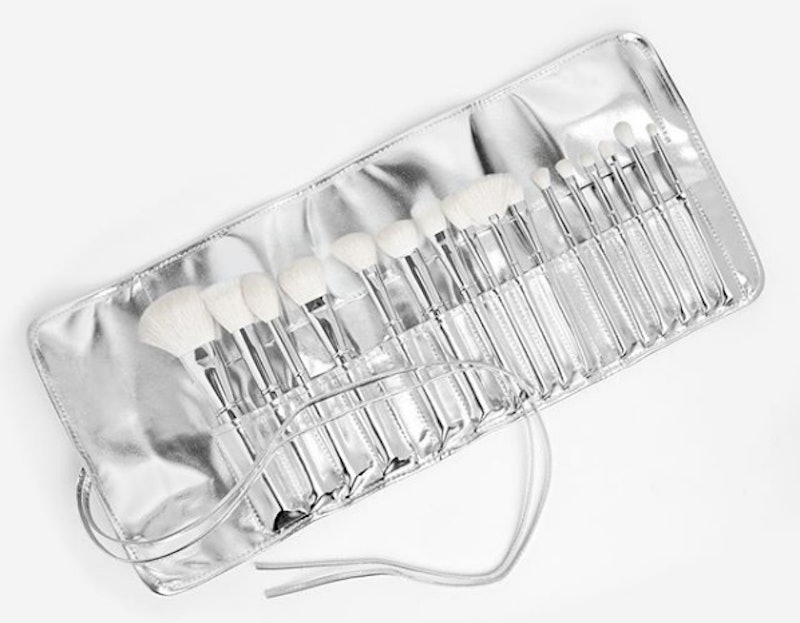 Typically, when Kylie Jenner creates a product, if flies off the virtual shelves. When her brand first launched, the Lip Kits sold out within minutes. Most of the other new launches haven't been able to stick around for more than a few hours, either. Until now, that is. People aren't happy about the price of Jenner's Silver Series Brush Set. Thankfully, YouTubers are here with Kylie Cosmetics' Brush Set dupes, so you can save you some money, honey.

Even before the Kylie Cosmetics Brush Sets launched, people were upset about the price. There are a few options when it comes to buying, but both of them are expensive AF. You can either buy all of the 16 brushes individually on the Kylie Cosmetics website for $18 to $48 each ($378 in all), or the brush set for $360. Yes, you saving a whopping $18 for the bundle.

Jenner has defended her real-hair, silver handled brush set's price by saying that they are high end. The majority of her fans aren't buying it — literally. It's the only launch that Jenner has had that hasn't flown off the shelves. As of Dec. 15 — two days after the launch — none of the brushes or the set have sold out.

Instead, YouTubers are taking to social media to give dupes for the non-synthetic set. Laura Lee did a tutorial with the brushes, deemed the brush roll of dollar store quality, and then give dupes for every single one. I guess not everything that Jenner touches turns to makeup gold after all.

Laura Lee named Sigma brushes as some of the best dupes for the Kylie Cosmetic's set. While not all of them will save a ton of money (some of the brushes are only $1 off), it's nice to know that there are other dupes out there. Some of while might already be hiding in your makeup bag.

YouTuber James Charles did an entire tutorial comparing Morphe's and Kylie Cosmetics' brushes. He uses the indie brand's tools on one side of his face and used Jenner's on the other. To no surprise, there was not much difference in application.

Although Morphe's brushes were all synthetic rather than all-natural, the resemblance was uncanny. All together, the Morphe tools cost $104, while Jenner's was $360. In case you're not into doing the math, that's a $256 difference. You could buy eight Lip Kits with the money you save.

I know what you're thinking; buying separate brushes is a pain in the butt. Thankfully, there are tons of brands out there that offer similar looking brush sets for a fraction of the price. If you're looking to save money and still get a great brush set, here are a few shopping options.

This brand was one of the first to jump in and share their affordable kit on social media, after seeing how expensive Jenner's was. "Want silver metalized brushes without spending a small fortune?," their caption sharing their set reads. You can snag this 10-piece set for under $20.

This set has everything that Jenner's does plus some extras. The 23-piece set is less than half the price of Kylie Cosmetic's set, and is just a shiny.

While this set might be smaller than the Kylie Cosmetic's one, it has a full face of essentials. All you're missing is a fan brush — and it's less than half of Jenner's set.

If you're looking for one that specifically comes with a brush roll, this is the steal for you. You'll get all 19 brushes plus the holder for $305 less than Kylie Cosmetic's. How's that for major savings?

This is just one of the 30-pieces sets available on the brand's website. You'll get almost double the amount of tool than the Kylie Cosmetics' set. You also get a bag to store them in that doubles as a purse.

Even Sephora Collections has a brush roll for less. The collection might have less eye tools, but it includes one that is missing from Jenner's collection — an eyebrow brush.

This brush set comes with nine different face tools. It's also completely cruelty free and vegan, which Jenner's is not.

Ultimately, how you spend your money is up to you. Just don't think that there aren't other makeup tool options out there.