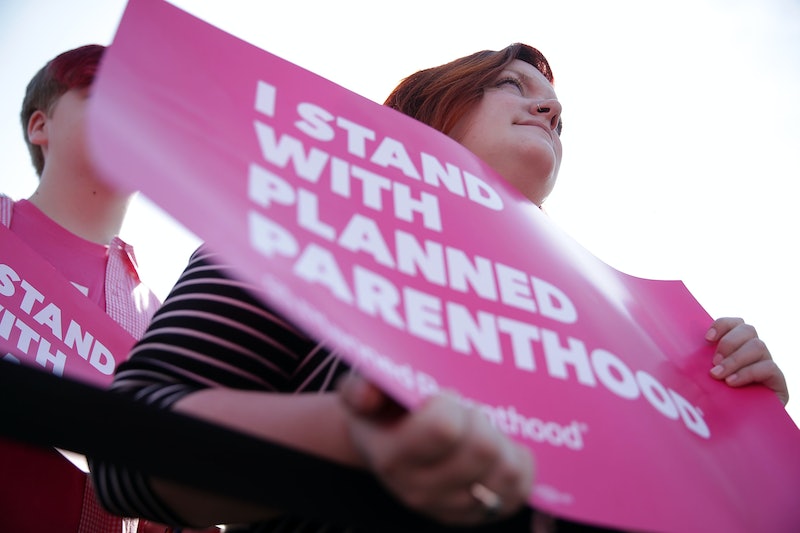 While the first attempt to repeal and replace the Affordable Care Act (and simultaneously defund Planned Parenthood) was killed in Congress on Friday, the health clinic says that it's important to "keep the pressure on" now more than ever. They have asked their supporters to let everyone — friends, family, and representatives alike — know about the good work the organization does, and why it is absolutely vital to continue fighting for women's health.

According to a recent Kaiser Health Tracking Poll, a staggering 75 percent of Americans oppose the effort to defund their clinics. So if you're among that huge majority, here are ways you can support them on Pink Out Day and every day moving forward:

1. Change Your Profile Picture In Support of Planned Parenthood

This is the easiest and most visible way to make your voice heard on social media. Planned Parenthood has designed this great filter to get your message across, and you can share it on all of your social media platforms.

Planned Parenthood's pledge to members of Congress tells them you stand with the organization. Regardless of the fact that this latest bill to defund the clinics failed, it is also important to get that message across.

Planned Parenthood organized what they dubbed a "thunderclap" to show support for the organization. Simply put, tweet out why you stand for women's health while using the hashtag #IStandWithPP. Just like with your profile pics or pledges, it's important to show your support long after Pink Out Day is over.

4. Make A Donation, Big Or Small

Making a single donation to Planned Parenthood can make a difference. Whether you give $5 once or set up a monthly donation, this can be an easy way to ensure the organization has the resources it needs for the times ahead.

This one may seem obvious, but it's a great and easy way to get your support across (bonus point that it looks good in the spring time). But truly, clothing can make a statement — think of the memorable times Hillary Clinton has worn suffrage white. Wearing pink in honor of Planned Parenthood can make just as powerful as a statement.

Planned Parenthood thrives on the support of its volunteer base. Volunteering doesn't have to be a large time commitment, either — making a difference could be as simple as taking some time out of your Saturday.

Lawmakers that support Planned Parenthood certainly have their work cut our for them for the next four years. Contact them to show your support for the difficult work they're doing in Congress to protect women's health.

These are simple things you can do to show your support for Planned Parenthood in a meaningful, sustainable way. Whether you change your profile picture or contact a lawmaker, it all helps toward the larger fight.

More like this
15 Black-Owned Liquor & Wine Brands To Add To Your Bar Cart
By Alexis Morillo
8 Charities To Donate To During Black History Month
By Alexis Morillo
These Artists Are Reimagining Black History Month To Create A Better Future
By Katie Mitchell
24 History-Making Black Women You Probably Didn't Learn About In School
By Ayana Lage and JR Thorpe
Get Even More From Bustle — Sign Up For The Newsletter
From hair trends to relationship advice, our daily newsletter has everything you need to sound like a person who’s on TikTok, even if you aren’t.