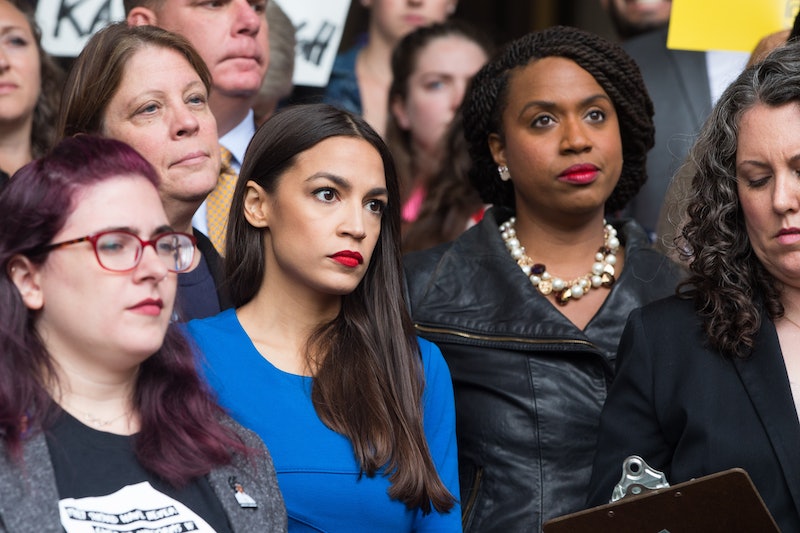 Even though the midterm elections haven't happened yet, people are already spreading a plethora of outlandish theories about them. Even President Donald Trump has joined in — and in several cases, he's the primary driver of the false claims. It's important to be on your guard against fabricated assertions about the elections, so here are seven 2018 midterm conspiracy theories that are absolutely false.

It's hardly unexpected that conspiracy theories are trending right now. They abounded during the last election, too — perhaps most notably, Trump claimed that millions of people voted illegally in 2016 (they did not). And these theories aren't just limited to the topic of elections. The Guardian notes that they have particularly proliferated around mass shootings in recent years. Parkland students who engaged in gun control activism after their school was attacked were accused of being crisis actors, for example.

Trump's first major foray into the world of politics was even founded on a conspiracy theory. For years, he asserted that President Barack Obama might not have been born in the United States. In 2012, he even claimed on Twitter that "an 'extremely credible source'" had told him Obama's birth certificate was "a fraud." So it's really no surprise that the president is engaging in them now.

Here are seven conspiracy theories to be on the lookout for this election season.

In October, 13 potentially explosive devices were mailed to high-profile Democrats, including Hillary Clinton, Barack Obama, and Kamala Harris. Floridian Cesar Sayoc is suspected to be the culprit and was arrested on Friday. He's a Trump supporter who, according to people who knew him, "spewed a lot of hatred." Before his arrest, though, many far-right commentators spread the idea that a liberal perpetrated the attacks to drum up sympathy for Democrats.

Ann Coulter, Lou Dobbs, Rush Limbaugh, and many others made the suggestion on social media. Coulter called the explosives a "liberal tactic," while Dobbs called them "fake bombs." Don Jr. liked a tweet spouting the theory, and the president himself put the word "bomb" in quotation marks when tweeting about the incidents. According to Media Matters, three guest analysts on Fox even brought up this conspiracy theory on the air.

In July, Trump suggested on Twitter that Russia was going to interfere in the midterms on behalf of Democratic candidates. "I'm very concerned that Russia will be fighting very hard to have an impact on the upcoming Election," he wrote. "Based on the fact that no President has been tougher on Russia than me, they will be pushing very hard for the Democrats. They definitely don’t want Trump!" He's also claimed that the election will be "rigged."

TIME debunked his assertions, noting that Trump hasn't actually been tougher on Russia than past presidents, that the U.S. intelligence community believes that Russian operatives interfered in the 2016 election on behalf of Trump, and that the president hasn't offered any evidence to suggest that Russia is going to meddle on behalf of liberals this time around.

Theory: Beto O'Rourke's Name Is A Ploy To Get Latinx Voters

Incumbent Texas senator Ted Cruz ran an advertisement suggesting that his opponent, Beto O'Rourke, changed his name to better appeal to liberals (O'Rourke's full first name is Robert). "I remember reading stories, liberal Robert wanted to fit in," Cruz's ad goes. "So he changed his name to Beto and hid it with a grin." According to The New York Times, many are spreading the theory that he adopted the name to sound more Hispanic.

But in fact, Beto has used the nickname "Beto" since childhood. In March, he even tweeted out a photo of himself as a toddler wearing a sweatshirt with the name "Beto" on it.

Alexandria Ocasio-Cortez, the Democratic candidate for New York's 14th Congressional District, often touted her humble upbringing during the primary season. But some conservative critics have been spreading theories that she grew up more privileged than she let on. Commentator John Cardillo tweeted that she went to Brown University and had a fancy childhood home. But The New York Times points out that she actually went to Boston University and that her house was relatively "modest."

"It is nice," Ocasio-Cortez tweeted about her home in response to Cardillo. "Growing up, it was a good town for working people. My mom scrubbed toilets so I could live here & I grew up seeing how the zip code one is born in determines much of their opportunity."

Theory: The Migrant Caravan Is Full Of Middle Easterners

A caravan of thousands of Central American migrants is currently walking north through Mexico; most are Hondurans fleeing violence and poverty, according to USA Today. Many will seek asylum in Mexico, while some may attempt to cross the border and seek refuge in the United States.

But Trump has been claiming that the caravan includes people from the Middle East, by which he's apparently implying that some of its members are especially dangerous. As The Guardian points out, there's no evidence to suggest that anyone from the Middle East has joined the caravan. Even the president admitted this when reporters pressed him on the topic: "There's no proof of anything," he said. "There's no proof of anything. But they could very well be."

Theory: The Migrant Caravan Is Funded By George Soros

Some people are spreading the theory that the caravan is being funded by George Soros, a philanthropist and activist often accused of being a liberal puppet master by people on the far-right. Fox guest Chris Farrell, for example, declared that the caravan was partially bankrolled by the "Soros-occupied State Department." Glenn Beck and others have also made that assertion.

This isn't true. As FactCheck.org explains, there's absolutely no evidence that Soros is funding the caravan; the migrants left their countries of their own accord. Tragically, this conspiracy theory may have already had deadly consequences. An idea took hold in anti-Semitic circles, particularly on the social media site Gab, that the caravan was to be blamed on Jewish funders (Soros is Jewish). The man who murdered 11 people in a Pittsburgh synagogue on Saturday was apparently inspired by this theory. Right before the attack, he wrote on Gab that a Jewish nonprofit group helping resettle refugees "likes to bring invaders that kill our people," and added, "Screw your optics, I'm going in."

This is another theory started by Trump. He posted a series of tweets in May accusing Robert Mueller and the rest of the Russia probe team of "collusion" in the midterms. "The 13 Angry Democrats ... working on the rigged Russia Witch Hunt, will be MEDDLING with the mid-term elections," he tweeted on May 29. "There was no Collusion, except by the Democrats!" As Yahoo News points out, Mueller's team is not exclusively made up of Democrats, and there's no evidence to suggest that they are meddling in the midterms.

These elections are extremely important. Don't let a groundless conspiracy theory change your vote — if you come across an outlandish claim, research it using a variety of sources before you decide to believe it.