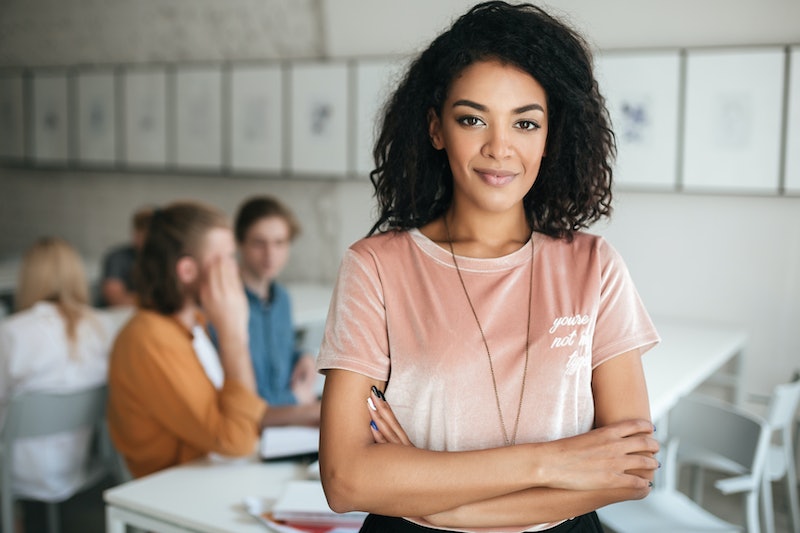 If there's an internal debate going on inside your head over whether you should ask for a raise or not, you're not alone. With the gender pay gap, society's expectations of women, and fact that women are less likely to get raises, it can be incredibly nerve-wracking to ask for a pay increase.

According to a 2018 report by Pay Scale, the gender pay gap continues to persist — women earn 77.9 percent less for ever dollar earned by men, which means that even today, a woman's median salary is approximately 22 percent lower than the median salary of a man. Additionally, while men and women tend to enter industries at the same level, by the middle of their careers men are 70 percent more likely to have gained executive roles than women. Additionally, a report by the National Women's Law Center shows that women of color make substantially less than white women, contributing to an annual net loss of approximately $23,000. These stats are unacceptable, as they suggest that society does not intuitively recognize a woman's value and contribution to her field.

This year's national Equal Pay Day takes place on April 10, 2018, a date which symbolizes how far into the new year women must work to earn what men earned in the previous year. Now, more than ever, it's so important to ask for what you deserve. It's time to change the narrative that asking for a raise is a bad look. Ambition is not something to shy away from, especially if you've been putting in the hard work to get where you are today.

"A raise can start accelerating your career," life coach and career expert Nina Rubin tells Bustle. "Asserting yourself highlights your leadership qualities." So instead of psyching yourself out with false expectations of what it will look like if you ask for more money, go into the situation both confident and prepared. So here are the myths to stop believing — and how to make your case.