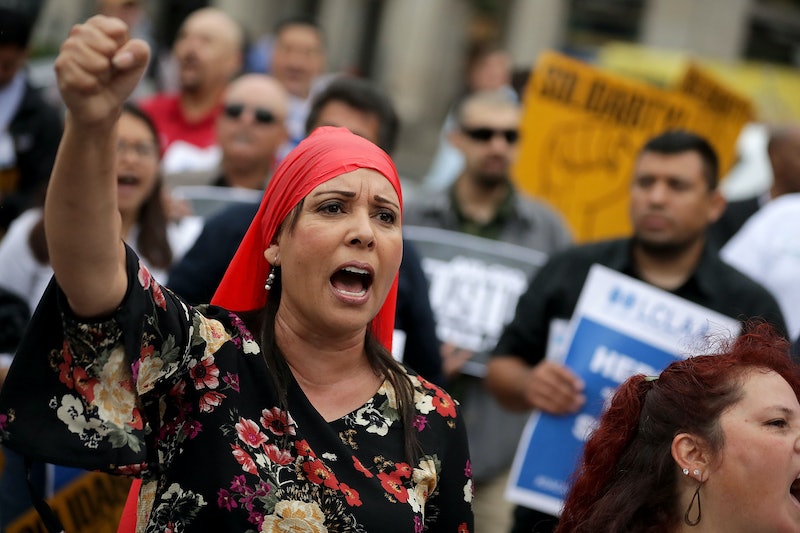 On Tuesday, Attorney General Jeff Sessions announced that President Donald Trump's administration would end the Deferred Action for Childhood Arrivals (DACA) program in six months. Trump's decision to end the program, which has provided work authorization to 800,000 young undocumented people, means that it is now up to Congress to decide the fate of these individuals, often called "Dreamers." And while Congress deliberates whether or not to pass the DREAM Act, there are several pro-DACA organizations you can support in the meantime.

Although the Trump administration anti-DACA decision seems to have made the lives of undocumented young people even more uncertain, it has fueled more than a few organizations to stand up and defend those young people. Lorella Praeli, the director of immigration policy and campaigns at the American Civil Liberties Union, said in a statement:

Today is a cruel day for Dreamers, our families and all Americans. President Trump's decision to end DACA is a manufactured crisis in response to an artificial deadline from anti-immigrant leaders. There is no humane way to end DACA before having a permanent legislative fix in place.

Read on for a list of some of the organizations supporting Dreamers and the reinstitution of the DACA:

Founded by Facebook head Mark Zuckerberg, FWD.us is a coalition of business and tech leaders who support the implementation of a DACA-like program. They are currently calling for signatures to a petition encouraging Congress to pass pro-Dreamer legislation. They have also created a handy tool to contact your representatives in Congress.

The American Civil Liberties Union is spearheading the charge against Trump's decision to end the DACA. Heads of various ACLU chapters have issued statements calling for Congress to pass pro-Dreamer legislation. The ACLU has also defended the DACA against the Trump administration's claim that is unconstitutional.

To participate in the ACLU's efforts, check out the website's tool to call your Congressperson or consider donating to the organization, which is a nonprofit.

According to United We Dream's website, the social justice organization is the largest organization of youth immigrants in the country, comprising more than 100,000 young, foreign-born people. United We Dream sponsors a sub-organization called We Are Here to Stay, which focuses on the situation of those young undocumented people who have or want deferred action status.

We Are Here to Stay's website features a tool to call Congress as well as a calendar and map of pro-Dreamer rallies occurring across the nation.

Make the Road New York is a pro-immigrant advocacy organization in New York. It is sponsoring the legal case of Batalla Vidal, a 26-year-old undocumented immigrant and DACA recipient who sued the Trump administration on Tuesday after it announced the end of the DACA.

There are a number of ways to support Make the Road New York. The organization is asking for support on social media and is accepting donations to help its efforts. It also has a tool to call the White House. And if you want to sign up for breaking news about the DACA, text ROAD to 52886.

The Interfaith Immigration Coalition is a pro-immigration network of religious leaders. These religious leaders hail from varying faiths — Islam, Christianity, Judaism — and are dedicated to encouraging both Congress and faith communities to support fair immigration reforms.

The coalition's website encourages the pro-Dreamer faithful to express their support on social media, and it provides sample social media posts as well as graphics that you can use.

The Immigrant Legal Resource Center is a national nonprofit that provides information and resources to immigrants. The ILRC has paid special attention to the situation of those enrolled in or interested in enrolling in the DACA program, and even created a comprehensive manual explaining the deferred action program.

The organization is a great source for updates on the DACA, issuing memos and holding webinars for those interested in learning the latest information.

To aid their continued support of DACA immigrants, visit the individual organizations that comprise the coalition, as listed here.

More like this
Why You're Seeing Green Bandanas At Abortion Rights Protests
By Lexi Inks
Windrush Victims Are Still Waiting For Compensation
By Sam Ramsden
5 Ways To Stand In Solidarity With Women In America From The UK
By Sophie McEvoy
The UK Abortion Laws In 2022, Explained
By Sophie McEvoy
Get Even More From Bustle — Sign Up For The Newsletter