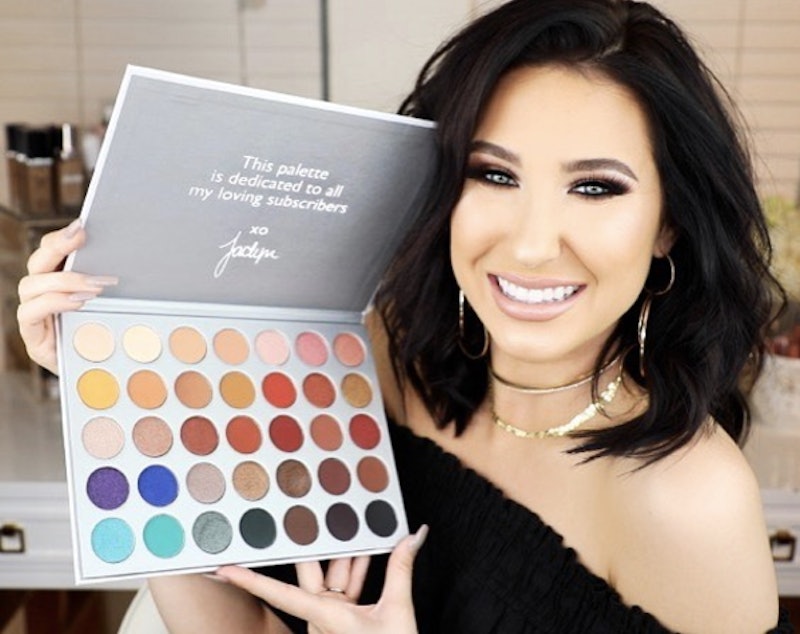 Hillsters, brace yourselves. We're finally getting all of the details on the very highly anticipated collaboration between Jaclyn Hill and Morphe, and you're going to need to sit down for this one. Jaclyn Hill is now dishing on everything you want to know regarding her signature palette, and there is a whole lot of information. If you haven't had a chance to check out the lengthy video just yet, here are 7 things you need to know about the Jaclyn Hill x Morphe Eyeshadow Palette per her big YouTube reveal.

After months of social media teasers, Hill has taken to her YouTube channel on Friday, June 16 to finally debut her colorful creation. If you're a dedicated fan of the beauty guru, you likely know that the palette is quite literally massive. Stocked with 35 stunning shades, the kit includes everything from shimmers and satins to creamy matte shades, which means there is definitely something for everyone.

The over 30-minute reveal video is jam-packed with so much awesomeness. Not only does Jaclyn provide super detailed, row-by-row swatches of every single shade, she also discusses the inspiration behind them, the meaning of each of their names, and what she truly loves about each of the hues. Perhaps the most sentimental point she makes, though, is how grateful she is to her loyal fanbase, who has stuck with her from the very beginning. She even goes as far as devoting the palette to her followers with a message inside the kit that reads, "This palette is dedicated to all my loving subscribers." Doesn't that just melt your heart?

If you're yearning for more, here are 7 of the most important things that you need to know about the Jaclyn Hill x Morphe palette.

1. Hill Created The Palette in 48 Hours

With the help of Morphe Creative Director, Linda Tawil, Jaclyn describes working nonstop for 48 hours when first conceptualizing her dream palette. Bringing her vision to life involved starting with over 100 shades (yes, you read that correctly), and ultimately narrowing it down to just 35. I have no idea how she could make that many cuts in such a short amount of time.

2. "Obsessed" Took The Longest To Create

Hill went through over 25 samples of the "Obsessed" shade before getting it just right, which is precisely how the color got its name. Now that's real dedication.

3. The Palette Was Supposed To Launch For Holiday 2016

After working tirelessly for nine months, the palette was ready for launch — until Jaclyn decided that it still wasn't quite perfect. She then removed nine shades and started the process from scratch, which is why it took two years for the palette to finally launch.

The peachy neutral color named "MFEO" stands for "Made For Each Other." If you're wondering why, Jaclyn explains that the inspiration comes from a scene in Sleepless in Seattle which she used to watch as a kid. Naming an eyeshadow after a classic film like that one is definitely super cool.

Yes, she literally named a shade "Pukey." Hill goes on to explain that the color emulates the perfect "baby pukey brown," which is just why she chose the name. LOL.

One specific shade in the palette (fifth shadow in the fourth row) is unlike the rest. The super sparkly brown contains a ton of glitter and is pressed very hard so as to keep all the shimmer tightly compact. That's why Hill recommends using your finger or a wet brush to apply the shadow. Thanks for the tip, Jaclyn!

7. She Wanted To Name "Central Park" Something Different

The matte brown color was supposed to be named "Central Perk," after the famous coffeehouse in Friends, because duh — it looks like coffee. Rather than running the risk of legal trouble with the television franchise, though, she settled on the name "Central Park."

The Jaclyn Hill x Morphe palette will be officially available for purchase on June 21, so mark your calendars now!

More like this
42 Black Owned Fashion & Beauty Brands To Support Today & Always
By Mekita Rivas, Shea Simmons, Kui Mwai and Dominique Norman
This Week’s New Makeup Releases & More Beauty Headlines
By Audrey Noble and Erin Stovall
The 19 Best OPI Nail Polish Colors, According To Manicurists
By Audrey Noble
15 Vegan Makeup Brands To Shop For Cruelty-Free Glam
By Audrey Noble
Get Even More From Bustle — Sign Up For The Newsletter
From hair trends to relationship advice, our daily newsletter has everything you need to sound like a person who’s on TikTok, even if you aren’t.