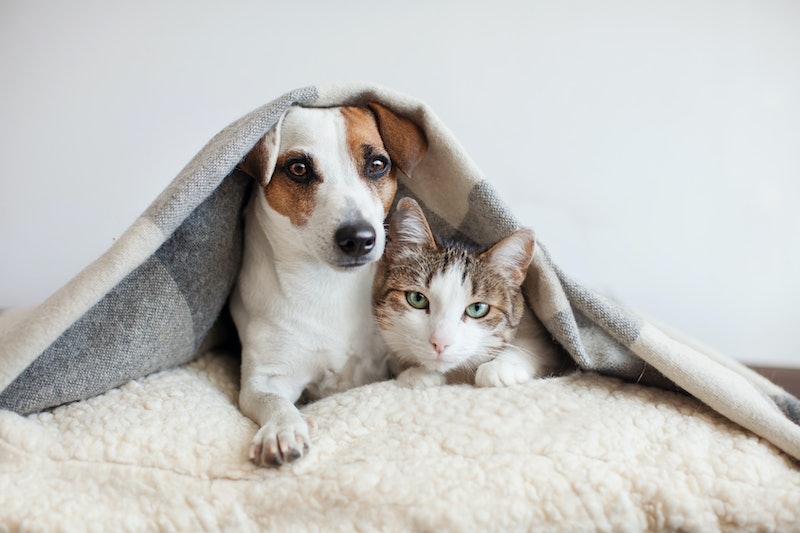 Lots of us have witnessed many an affection relationship between the family pup and resident feline. While there's some truth to the idea that cats and dogs are each others natural enemies, it is absolutely possible to live with both a cat and a dog. With some careful planning, respect for the needs of each animal, and skill, pups and cats can coexist in peaceful and loving harmony. They can even be best friends — sometimes. That said, there are some factors that can help stack the odds in your favor, though — it’s good to be aware of what to do, and what you’re better off avoiding when introducing any new animal to your home; especially when a potential cross species relationship is at play.

Dogs and cats do speak different languages, as it were — they see the world, and relationships with humans and other animals, through different, often contrasting, lenses, Animal Planet notes. Also, the way your cat and pup respond to each other will likely be shaped by any previous experiences they’ve had with the respective species; if your kitty has had any traumatic encounters with dogs in the past, that could complicate the introduction of a new dog into your home a bit, and vice versa. Here are seven simple tips to help your furry kiddos adjust well to one another, make a new buddy, and enjoy a long and harmonious relationship.

More like this
So Many Dog Owners Are Obsessed With These Weird Dog Products
By Veronika Kero
Amazon Keeps Selling Out Of These Pet Products With Near-Perfect Reviews
By Madison Barber
The 7 Best Cat Litters For Odor Control
By Erica Gerald Mason
The 8 Best Chew Bones For Puppies, According To A Vet
By Andrea Hannah
Get Even More From Bustle — Sign Up For The Newsletter