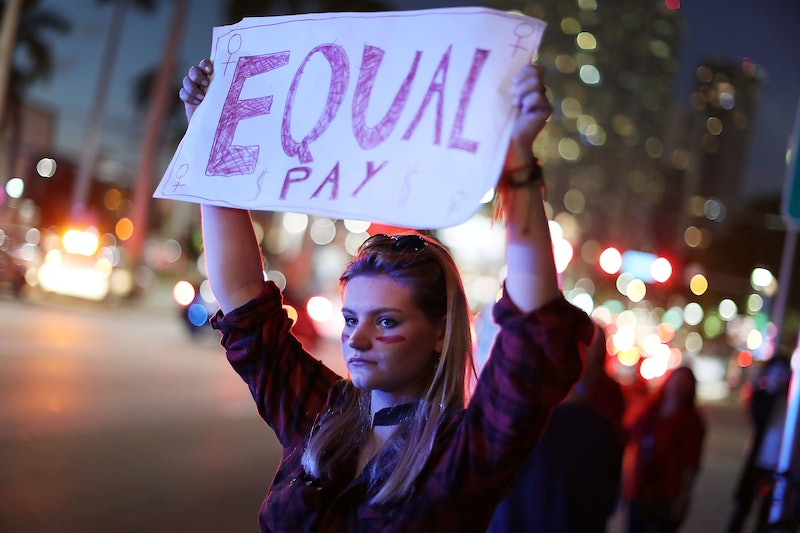 Although the World Economic Forum recently reported that women in every country face a gender wage gap, plenty of people continue to dismiss the idea that women face discrimination in the workforce. And the United States is hardly exempt from the wage gap problem. A 2017 American Association of University Women (AAUW) study found that in 2015, women were paid 80 percent of what men were, on average.

It is important to recognize that over the years the gender wage gap has narrowed some. However, the rate of progress slowed in 2001, causing researchers at the AAUW to re-evaluate estimates on when women will reach pay equity with men. At the current rate of progress the gender wage gap is not expected to be fully closed until 2152, according to a recent analysis from AAUW.

On Equal Pay Day (which falls on April 4 this year) you're likely to hear more than one person claim the gender wage gap has nothing to do with discrimination and is instead a result of women's lack of commitment to the workforce. Or you might encounter arguments the wage gap is nothing more than a myth feminists made up years ago. But to borrow a phrase from AAUW, "the gender pay gap is all math, not myth."

Here are 7 myths about the gender wage gap that need to be busted once and for all:

The biggest myth surrounding the gender pay gap is that it doesn't actually exit. Despite being an issue acknowledge by both the White House and the United Nations, wage gap deniers still abound as evidenced by this op-ed published in the Wall Street Journal in 2015 and this 2016 Forbes column. Their argument is essentially that wage gap statistics don't take into consideration the different choices that men and women make when it comes to they type of work they choose to do, the hours they choose to work, and when they choose to opt out of the workforce.

Granted, the wage gap is significantly more complex than the statistic that women in the US are paid 80 cents for every dollar paid to a man seems to initially allow for — race, parental responsibilities and other factors contribute However, using the differences between men and women's "life choices" to dismiss the gender wage gap entirely is a gross oversimplification of an issue and ignores the fact the wage gap exists regardless of education level across all industries and occupations.

2. Women Deserve Less Because They Are Inferior

It's hard to believe that in 2017 there are still people who think women should be paid less than men, and yet that's exactly what Janusz Korwin-Mikke, a Polish member of the European Union Parliament, recently claimed. During debate on the gender wage gap, Korwin-Mikke reportedly said, "Women must earn less than men because they are weaker, they are smaller, they are less intelligent."

This argument is so blatantly sexist it's hardly worth refuting. I mean, come on.

Speaking of arguments that are completely absurd. When legislatures in Utah proposed a bill that would strengthen equal pay protections for women, Wasatch County GOP Vice Chair James Green, who has since resigned, wrote in to a local paper to argue that equal pay would be "bad for families and thus for all of society." Green claimed men should be paid more to "allow the Mother to remain in the home to raise and nurture the children" and that if women were paid equally then men's pay would decrease and "more Mothers will be forced to leave the home."

First, the argument that closing the gender pay gap in favor of equality between the sexes will somehow leave men at a disadvantage is archaic and sexist. Second, more and more women are becoming the primary earner in their household. Data from the 2013 US Census found a woman was either the primary or sole breadwinner in four out of 10 households where there were children under the age of 18. Thus equal pay for women, means more money for families.

Some people have argued that women end up earning less than men because they make the personal choice to interrupt their time in the workforce to have children. Yet, taking time off to focus on family can have different outcomes for men than it traditionally does for women.

For women returning to the workforce after taking time off for pregnancy or childrearing, the so-called "motherhood penalty" can mean they're left at a disadvantage when it comes to wages and career trajectory due to discrimination. Men on the other hand, have been shown to receive higher wages after having children in what researchers have dubbed "the fatherhood bonus."

It is worth noting that more and more men are taking on a "stay at home" caretaker role, according to an analysis from the Pew Research Center. In 2012, 2 million US men had opted to be "stay at home dads," nearly double the number reported in 1989.

The argument that women aren't paid more because they don't ask for more has been around for a long, long time. A study from the National Bureau of Economic Research in 2012, however, found women were more likely than men to initiate negotiations over their pay when an employer explicitly noted the salary was negotiable. That same year, the human resources software vendor TribeHR reported 7.4 percent of women received raises compared to just 6.2 percent of men, meaning women are clearly showing up at the bargaining table.

However, TribeHR also found that while fewer men received raises, the raises they were given were higher than those received by women. According to their report, 60 percent of 5 percent (or more) raises were given to men in 2012, compared to 38 percent to women.

6. The Wage Gap Is The Same For All Women

Unfortunately, a report from the AAUW claims the gender pay gap won't be closed completely until 2152 and won't get there without our help.

More like this
This Is When Netflix Is Going To Start Charging You For Sharing Passwords
By Darshita Goyal
Twitter Has *A Lot* To Say About The "Single Penalty”
By Sam Ramsden
24 History-Making Black Women You Probably Didn't Learn About In School
By Ayana Lage and JR Thorpe
25 Inspiring Quotes From Black Women To Celebrate Black History Month
By Kyli Rodriguez-Cayro and JR Thorpe
Get Even More From Bustle — Sign Up For The Newsletter
From hair trends to relationship advice, our daily newsletter has everything you need to sound like a person who’s on TikTok, even if you aren’t.